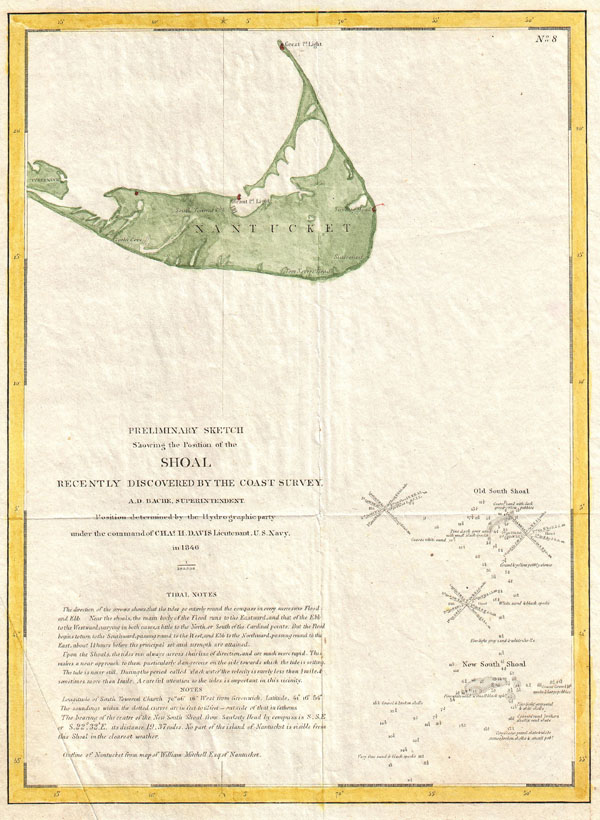 ... The history of this most dangerous and fatal shoal is startling. Situated in mid-ocean; having, in low ebbs, scarcely a foot of water; in a region proverbial for its heavy swell; rising, at times, without a moment's warning; the dread of all mariners, and the grave of thousands ....
-William Mitchell

Uncommon, highly significant, and often under-appreciated, this is 1848 map is the first U.S. Coast Survey chart to depict the shoals off Nantucket. Though the unpredictable waters off Nantucket were long a nemesis to sailing vessels on the important London – New York shipping routes, they had never been properly charted. The harsh conditions, including rapid unexpected swells and frequent heavy fog, contrived to make the hydrographic survey of the hazards south of Nantucket one of the most dangerous and challenging projects of the early coast survey. The first survey party to tackle this area was lead by the indomitable Lieutenant Commanding Charles H. Davis. Starting at Old South Shoal, a known danger, Davis worked his way southward and soon discovered 'New South Shoal,' which was later renamed 'Davis Shoal' in his honor. Working seasonally, it took the Coast Survey to 1853, fully seven years, to complete the survey of the Old South Shoal and Davis' Shoal.

Prepared by Charles H. Davis under the supervision of A. D. Bache for the 1847 edition of the Superintendent's Report.


William Mitchell (December 20, 1791 - April 19, 1868) was an American born Quaker, astronomer and surveyor based in Nantucket, Massachusetts. Mitchell attended various private schools on Nantucket Island and for a time planned to study at Harvard. However, for unknown reasons, possibly fiscal limitations relating to the War of 1812, these plans never materialized. Ultimately, Mitchell took responsibility for his own education and made extensive studies in astronomy, surveying, and mathematics. When the U.S. Coast Survey arrived on the island in 1847, Mitchell became fast friends with A. D. Bache, Superintendent of the Survey. The two became lifelong friends and Mitchell's comments and research appears in several editions of the Superintendent's annual Report. Mitchell's most important cartographic work is his 1838 map of Nantucket. This map, which includes Tuckernuck Island, eventually made its way into the U. S. Coast survey where it was a fixture for nearly 10 years. Mitchell was survived by a son, Henry Mitchell, and daughter, Maria Mitchell. Henry became a prominent Hydrographer with the U.S. Coast Survey and is responsible for many important maps and charts. Maria Mitchell, following in her father's footsteps, became an astronomer of international acclaim, eclipsing the rest of her family in prominence. She was eventually accepted an appointment as Professor of Astronomy at Vassar College, in Poughkeepsie, NY. It was here, under the care of his ever-devoted daughter that William Mitchell passed away in 1868. Learn More...

Report of the Superintendant of the U.S. Coast Survey, (1847 edition).