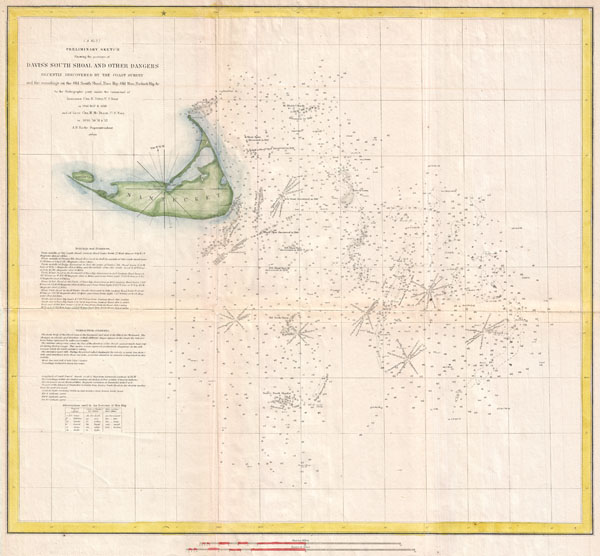 This beautiful and important sea chart or map depicts the waters immediately surrounding the island of Nantucket, Massachusetts, including Davis' Shoal, Old South Shoal, and others. Uncommon, highly significant, and often underappreciated, this 1853 map reveals an important stage in the charting of the shoals off Nantucket. Though the unpredictable waters off Nantucket were long a nemesis to sailing vessels on the important London – New York shipping routes, they had never been properly charted. The harsh conditions, including rapid unexpected swells and frequent heavy fog, contrived to make the hydrographic survey of the hazards south of Nantucket one of the most dangerous and challenging projects of the early Coast Survey. The first survey party to tackle this area was lead by the indomitable Lieutenant Commanding Charles H. Davis. Starting at Old South Shoal, a known danger, Davis worked his way southward and soon discovered 'New South Shoal,' which is here renamed 'Davis Shoal' in his honor. Working seasonally, it took the Coast Survey to 1853, fully seven years, to complete the survey of the Old South Shoal and Davis' Shoal. Bache himself discussed the difficult of accurately mapping the regions south and west of Nantucket in his 1852 Congressional Report:

This map was created under the direction of A. D. Bache, Superintendent of the Survey of the Coast of the United States and one of the most influential American cartographers of the 19th century. The hydrography for this map was accomplished by a party under the command of Cha. H. Davis in 1846-48 and Charles H. Mc. Blair in 1849-52. Published in the 1853 Superintendent's Report.

Report of the Superintendant of the United States Coast Survey, Washington, (1853 edition).