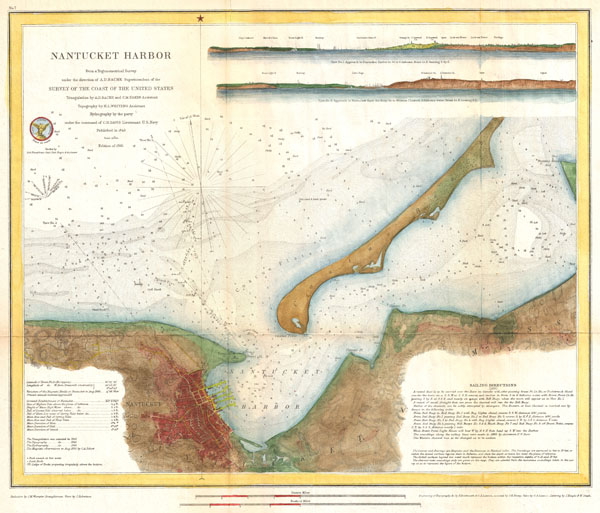 An extraordinary 1866 U.S. Coast Survey nautical chart or map of Nantucket Harbor, Massachusetts. Covers Nantucket Harbor on the northern part of Nantucket roughly from Whale's Rock to Pocomo Head. Includes the town of Nantucket as well as Coatue Beach. This is one of the rarest and most desirable charts issued by the U.S. Coast Survey. Offers superb nautical and inland detail. Includes countless depth soundings and inland detail to the level of individual streets, wharves and buildings. Identifies the Bug Lights, Range Light, Coatne Point, Brant Pint, Pumny's Point and Shemo Point, among others. Also identifies various undersea dangers such as flats, shoals, and rocks. There are two profile views in the upper right quadrant. Both views detail Nantucket Harbor from various directions and distances. Notes on the construction of this chart appear in the lower left hand quadrant. Sailing directions can be found in the lower right quadrant.

The topography was executed H. L. Whiting. The Triangulation was accomplished by A. D. Bache and C. M Eakin. The Hydrography was completed by a party under the command of C. H. Davis. This chart was prepared under the supervision of A. D. Bache, one of the most influential Superintendents in the history of the Coast Survey. Issued in the 1867 supplement to the 1865 Superintendent's Report.