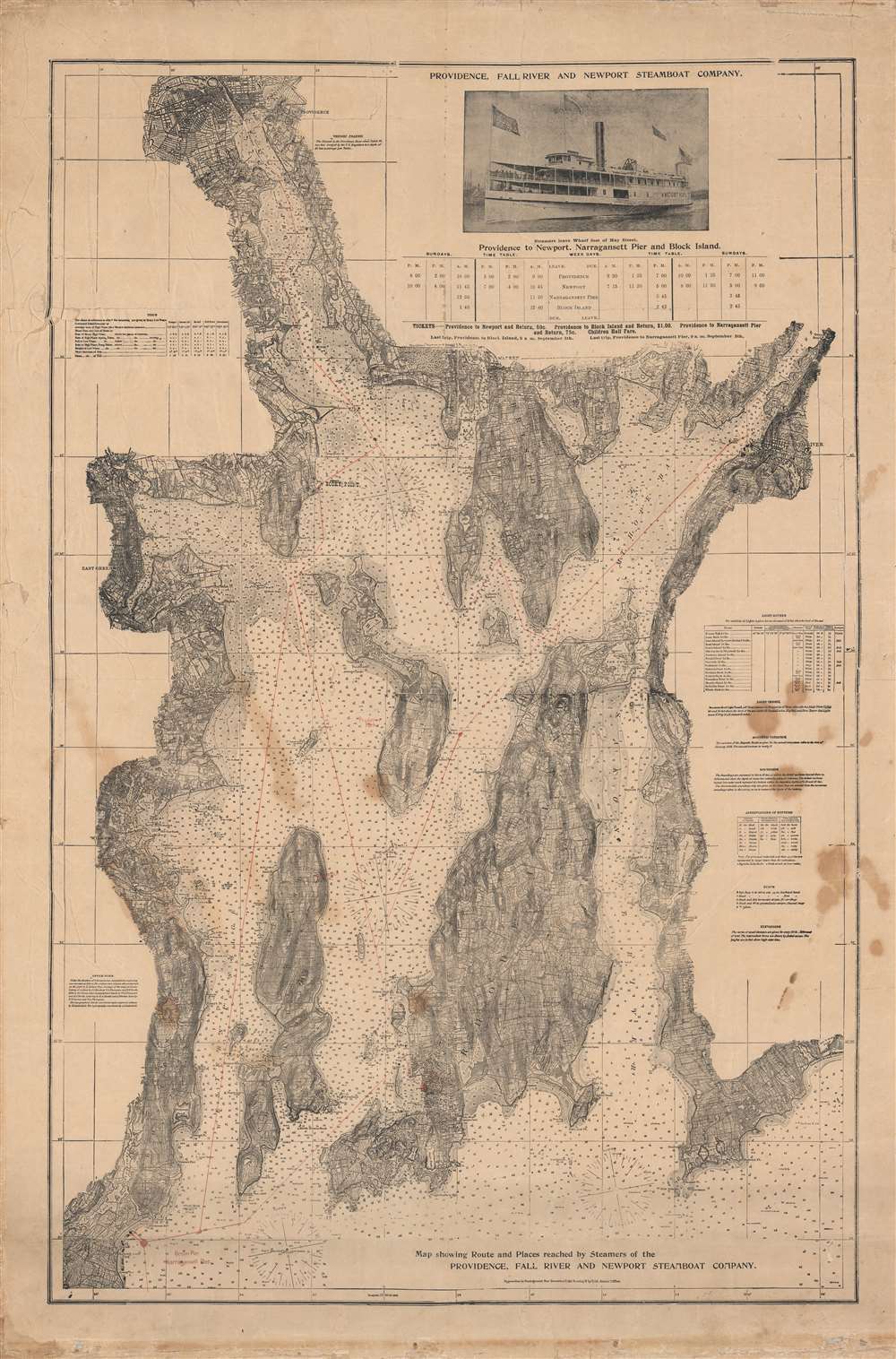 This is a rare c. 1902 chart and map of Narragansett Bay and surrounding communities, published to promote the Providence, Fall River and Newport Steamboat Co. Based upon U.S. Coast survey charts, it provides exquisite detail on the bay's waters, islands, shoreline, and other features.

This nautical chart covers the entirety of Narragansett Bay from Providence, Rhode Island, to the Pettaquamscutt River and from East Greenwich and Apponaug to Fall River, inclusive of Newport, Warren, Rhode Island (the island), Bristol, Connecticut Island, and Prudence Island. The whole features countless depth soundings in feet as well as a wealth of practical information for the mariner, including notes on light houses, bottoms, magnetic variation, light vessels, elevations, tides, and more.

The Providence, Fall River and Newport Steamboat Co.'s routes are traced in red and a timetable of ships is provided at top right. In the years prior to this chart's publication, the company built a new pier at Narragansett along with a wharf in Providence (noted here as 'foot of Hay St.') adjoining its headquarters at 136 Dyer Street. Although this chart was made when steamboats were decreasing in popularity, the geography of the bay has led ferry services to retain a continued relevance even in the automobile age, and several companies still operate services in and around Narragansett Bay.

This chart was distributed by the Providence, Fall River and Newport Steamboat Company in or around 1902. It looks to be based on an 1873 U.S. Coast Survey Chart of the bay (narragansettbay-uscs-1873), but it has been reduced in size and modified to include information on the company's routes and schedules. This chart is not known to exist in any institutional collections and has only been on the market once in recent years.

Providence, Fall River and Newport Steamboat Co. (fl. c. 1895 - 1925) was a passenger ferry service operating in Narragansett Bay, Rhode Island around the turn of the 20th century, with eight steamers providing service at Narragansett, Fall River, Newport, Providence, and other locations around the bay. The company distributed maps to potential passengers to advertise its services, some of which have survived to the present. Learn More...

Average. Linen-backed with some areas of loss and creasing, especially in margins. Spots of discoloration, most prominently at right.
Looking for a high-resolution scan of this?