1842 Hoar and Mead City Plan or Map of Nashua and Nashville, New Hampshire 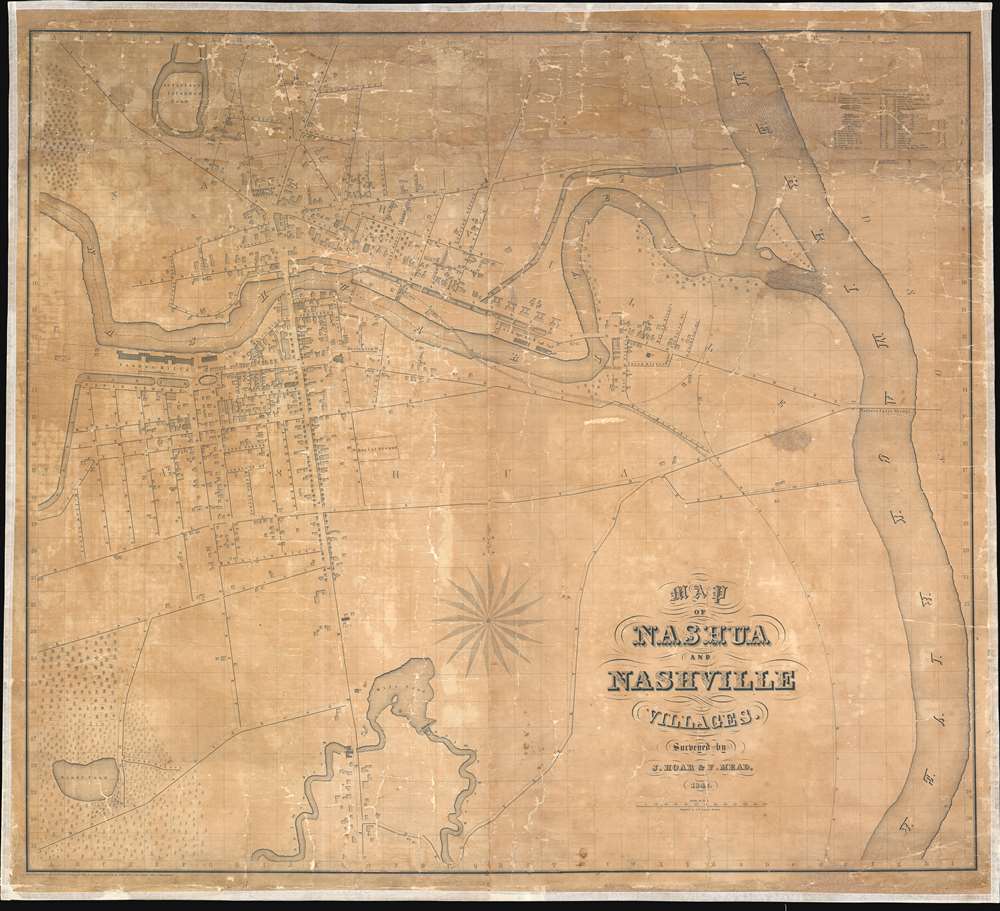 1842 Hoar and Mead City Plan or Map of Nashua and Nashville, New Hampshire

One of the first large-scale surveys of this historic town.

This is an 1842 J. Hoar and F. Mead wall-sized city plan or map of Nashua and Nashville, New Hampshire, and one of the first large-scale commercial map of the city. The Nashua River bisects Nashua and Nashville, with a bridge, labeled 'Main Street,' connecting the two. Streets throughout both villages are identified. Individual buildings are also illustrated, and over forty of these are numerically labeled. The corresponding index, situated in the upper right corner, lists the 1st Congregational Church and several other churches, a handful of schoolhouses, and several other locations around town. Only the cemetery, burial site, Nashua Mills, and the canal basin are directly labeled on the map; all other specific sites bear a number. 'Sandy Pond' and the surrounding forest are attractively illustrated in the lower-left corner, and Salmon Brook and the Mill Pond occupy space along the bottom border. The Merrimack River flows from top to bottom along the right side.

This map was created and published by J. Hoar and F. Mead in 1842, likely from surveys they undertook themselves and engraved by George Boynton. The map was sold commercially by subscription, with a very limited run,and so very few examples survive today. Two examples are cataloged in OCLC and are part of the institutional collections at the State Library of Massachusetts and Dartmouth Library. A third is part of the collection at the New Hampshire Historical Society. Extremely rare.

George Washington Boynton (fl. c. 1830 - 1850) was a Boston based cartographer and map engraver active in the first half of the 19th century. Boynton engraved and compiled maps for numerous publishers including Thomas Bradford, Nathaniel Dearborn, Daniel Adams, and S. G. Goodrich. His most significant work is most likely his engraving of various maps for Bradford's National Atlas. He also engraved for the Boston Almanac. In 1835 Boynton is listed as an employee of the Boston Bewick Company, an engraving, stereotype, and printing concern based at no. 47 Court Street, Boston. Little else is known of his life. Learn More...


Frank Mead (c. 1840 - 1845) was a civil engineer and surveyor based in Lowell, Massachusetts, active in the 1840s. He is responsible for a large wall map 1842 wall map of Nashua, New Hampshire, issued in conjunction with J. Hoar. He may have worked on another plan of Lowell, Massachusetts, also with Hoar, but the connection is unclear. Learn More...