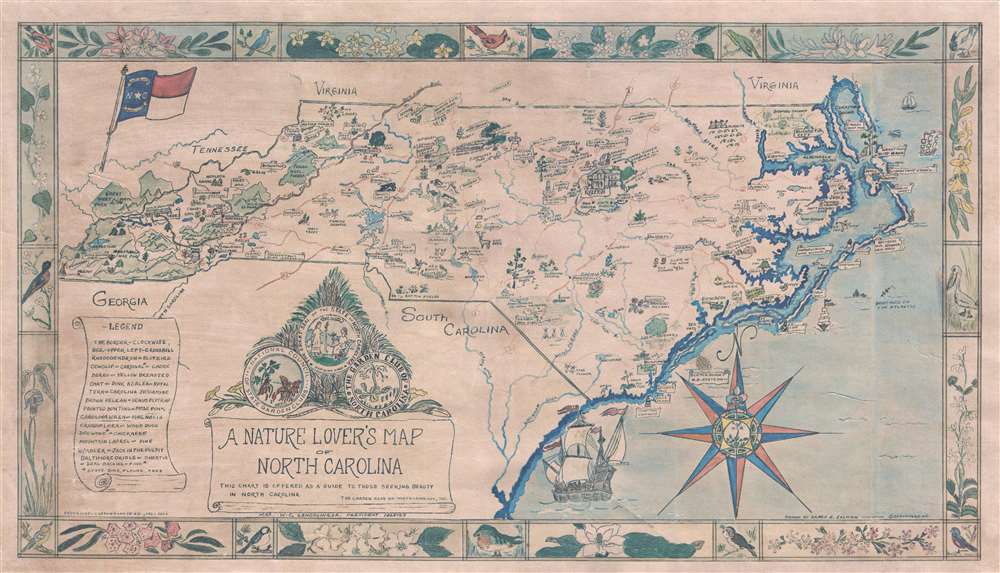 Features a pictorial border consisting of illustrations of birds and plants native to North Carolina.

A striking and rare 1966 Grace Belknap Illman pictorial map of North Carolina. The map depicts all of North Carolina as well as adjacent parts of Georgia, Tennessee, Virginia and South Carolina. Cities, towns, points of interest, gardens, parks, and historical sites are illustrated pictorially. Flower shows and festivals are also noted, since this map was published by the Garden Club of North Carolina.

National parks and state parks throughout the state are also illustrated and labeled. Great sailing ships from the 17th or 18th century appear in the Atlantic off the Outer Banks, where several sinking ships highlight the 'graveyard of the Atlantic.' Kitty Hawk, where Orville and Wilber Wright made the first powered flight in human history, includes an illustration of the 'Wright Flyer'. The seals of the State of North Carolina, the National Council of State Garden Clubs, and the Garden Club of North Carolina are situated to the left of center, just above the title cartouche. The whole is surrounded by a pictorial border highlighting North Carolina's striking diversity of flora and fauna.

Grace Belknap Illman (April 22, 1918 - February 11, 2014) was an American teacher, gardener, wife, and mother. Born in Walla Walla, Washington, to Courtney and Florence Belknap, she graduated from Oregon State University in 1942. During World War II, Illman served as a brevet lieutenant in the Army Air Corps at Scott Field, Illinois, where she taught aircraft radio operations. While at Scott Field, she also met her future husband, Walter Illman. In 1945, Illman moved to Greensboro, North Carolina where she wed Walt in 1948. Grace taught vocational education at Greensboro (Grimsely) High School and later worked as a full-time substitute teacher at Kiser Junior High School. Illman was an avid gardener and joined the Westridge Gardeners in 1952, and, in 1956, she served as President of the Greensboro Council of Garden Clubs. Illman was recognized as the Mary Seymour Woman of the Year in 2011 in recognition of all she had done for the Garden Council and the community of Greensboro at large.


The Garden Club of North Carolina (GCNC) (1925 - Present) was founded on November 6, 1925, in Winston-Salem, North Carolina. The GCNC administers three public gardens in North Carolina: the Elizabethan Gardens on Roanoke Island, the Daniel Boone Native Gardens in Boone, and the Martha Franck Fragrance Garden, which was closed due to the expansion of the grounds of the Rehabilitation Center for the Blind in Butner, where the garden was located. In 1997, the Governor Morehead School for the Blind approached the GCNC and asked if they would like to establish a garden on the school's grounds for their students and their families, and this garden, by the same name, was dedicated in 2001.

Good. Backed on linen. Even overall toning. Blank on verso.