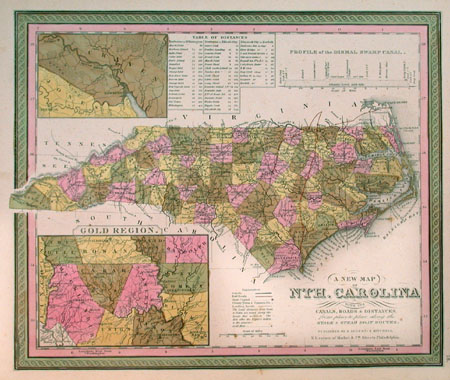 This hand colored map is a copper plate engraving, dating to 1850 by the legendary American Mapmaker S.A. Mitchell, the elder. It represents the state of North Carolina. This historically important map is extremely rare as it existed only in the 1850 edition of the Mitchell's Universal Atlas. Also of historic import is the fascinating inset of the North Carolina Gold region that comprised, Rowan, Cabarrus, Stanley, Montgomery, Richmond, Anson, Union and Mecklenburg counties. There is an interesting profile of the relative elevations of the important Dismal Swamp Canal. This canal and others liked it formed vital transportation links in the era before highways and railroads. Political boundaries as well as major rivers, territories, and counties are carefully labeled. Also included are major canals, explorer's routes, roads, trading posts, and extant & proposed railroads. Further, all notable mountains, passes, and even important trading posts are labeled, as are bodies of water, rivers, mountains, islands, and sub regions. Most major national and local political distinctions are outlined and defined by vibrant color: reds, greens, yellows & browns. This map is dated and copyrighted, 1850. This stunning map is a copperplate engraving and was once part of the great 1850 edition of Mitchell's Universal Atlas. This is one of the first atlases Mitchell ever produced and perhaps the finest 19th century American Atlas ever made! These rare maps with their elaborate green and purple had painted borders, bright colors, extraordinary detail, and fine engraving almost never appear in galleries.