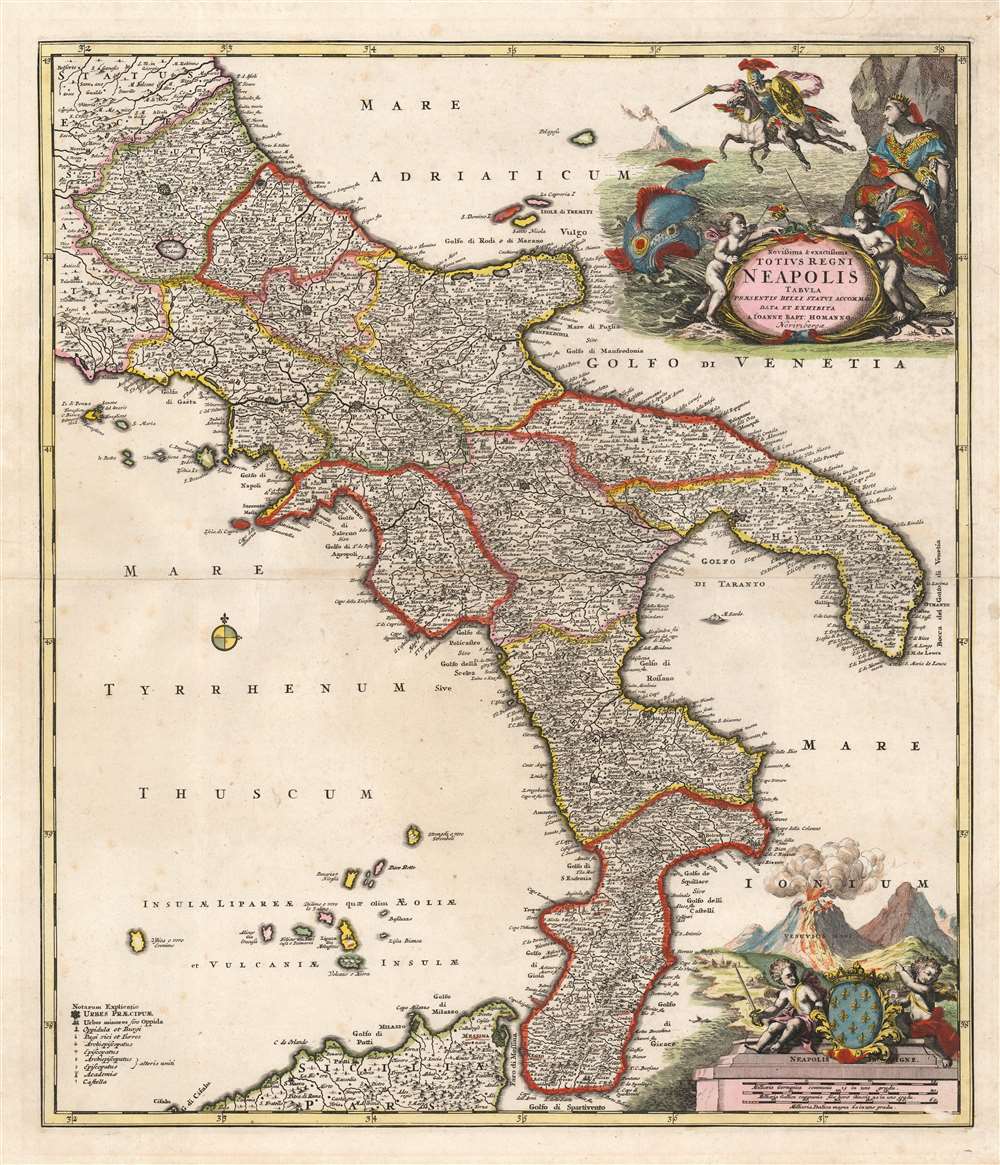 This is a beautiful, old-color example of Johann Baptist Homann's 1716 map of the Kingdom of Naples, which comprises southern Italy. The map depicts the region from Terracina to the Adriatic Sea, and from the Adriatic Sea to northern Sicily. Countless towns and villages are shown and named, including major cities such as Naples, Messina, and Capua.

Andromeda was the daughter of the Ethiopian king and queen Cepheus and Cassiopeia; the vain Cassiopeia boasted of being more beautiful than Juno, the queen of the gods. Bad move: Juno had Neptune send a sea monster Cetus to menace the Ethiopian coast - until to appease Neptune, Cepheus was forced to sacrifice his beautiful virgin daughter, Andromeda, to Cetus by chaining her (naked!) to rocks on the shore. Perseus, passing by, noticed the beautiful girl and made a deal with her parents that he would save her on the condition that he be given her hand in marriage. The king and queen agree. Perseus saddles up Pegasus, kills the monster, saves the girl - and gets the girl.

In this iteration of 'Perseus and Andromeda', Andromeda is modestly and sumptuously dressed, and wears a crown. Despite being chained to the rocks, she is a regal figure, and in this context, represents the Kingdom of Naples. Perseus, astride Pegasus, is carrying a shield bearing the arms of Charles VI, the Holy Roman Emperor; so Perseus here is either the Empire, or the Emperor, or both. The monster Cetus roils the waves, while in the background, an island volcano - possibly Stromboli - fumes. Flanking the title cartouche, the angriest putti we have ever seen lash at each other with swords. Contextually, the war that is alluded to both in the title and by the war-putti is the 1701-1714 War of the Spanish Succession. During the war, Charles' Empire seized the Kingdom of Naples from Bourbon Spain, and retained the territory in the 1714 treaty of Rastatt. And so, like Perseus, Charles VI would go to war to 'rescue' Naples - on the condition that she become his possession thereafter.

This map was engraved, possibly by Homann himself, for inclusion in his atlases. It was probably not done prior to 1707 (when the war moved to Naples) and it was certainly completed by 1716 (one of the earliest dates we see it in an atlas whose date is itself confirmed). A later state of this map, which includes the Imperial Privilege in the title cartouche, appears sometime between 1724 and 1730 after Homann's death and the firm's passage to his son. The map is well represented in institutional collections, but with the haphazard dating that characterizes OCLC listings for Homann's maps. As a side note, Homann maps rarely exhibit old color this fine, applied with such delicacy - especially to the decorative cartouche. For anyone looking for this map, the present example is the high point.

Very good. Light toning at centerfold. Small area of scuffing at lower right with slight loss to border; mended wormhole to right border away from printed image. Old color of remarkable quality for this kind.