1871 Separately Issued Folding Colton Map of the State of Nebraska 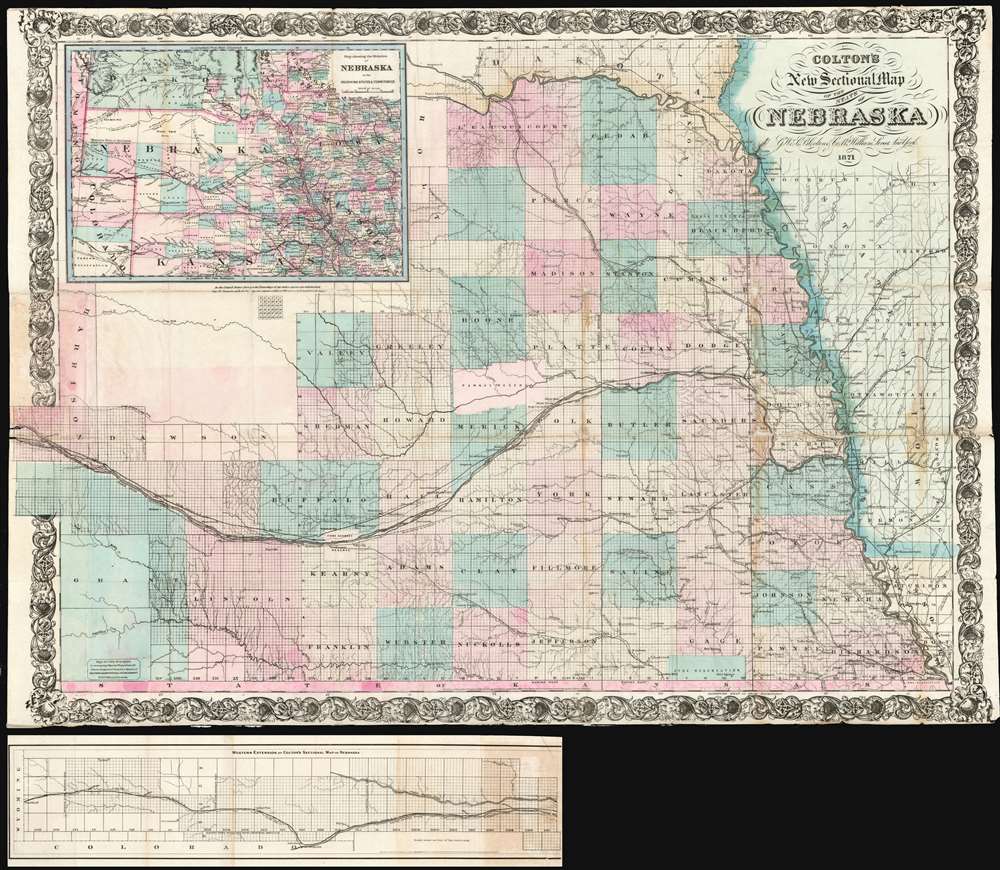 1871 Separately Issued Folding Colton Map of the State of Nebraska

This is a large, scarce 1871 Colton map of Nebraska. This separately-issued, folding map details the state four years after its admission to the Union, during the population boom brought on by the opening of the prairie - both by the ongoing forcible resettlement of Native American tribes, and by the completion in 1869 of the Union Pacific Railroad.

The main map, colored by county, presents in large scale the state as far west as the confluence of the North and South Platte. The grid, indicating township surveys, is shown as far west as Grand Island City; beyond that, the surveyed area hews closely to the Platte and the route of the Union Pacific Railroad. Fort Kearny (misspelled Kearney on the map) appears prominently, despite the closing of the military post in the same year this edition of the map was published. In all the surveyed areas, rivers and streams are presented prominently while settlements are few and far between: the suggestion, that here was abundant land suitable for farming, is inescapable.

The upper left hand quarter of the map is dominated by an inset showing the full state of Nebraska in relation to the neighboring states and territories. The comparison of Nebraska with the neighboring territories emphasizes the connection of the new state with the rest of the country, both by means of the Missouri River but also by its convenient co-location with the Union Pacific, running the length of the state.

Rather than re-engrave the entire map (when so much of the western extent of the state was but little surveyed,) Colton has added an appendix map extending from the western limit of the main map to the border of Wyoming. This extension, executed at the same scale as the main map, focuses specifically on the surveyed lands adjacent to the South Platte River and the route of the transcontinental railroad. In all, between the two sheets, the Union Pacific within Nebraska is exceptionally well detailed.

This separately-issued map was printed by the Colton firm in a number of issues, and sold as a separate folding map. Karrow lists editions of 1866, 1867, 1868, 1869, 1870, 1873 and 1875. (The present 1871 edition does not appear in Karrow. The other editions are well represented in institutional collections; we find only one example of the 1871 in OCLC, at Harvard. We identify only three examples of the map to have been catalogued since 1962, and none in this edition.