1856 Colton Map of Nebraska and Kansas 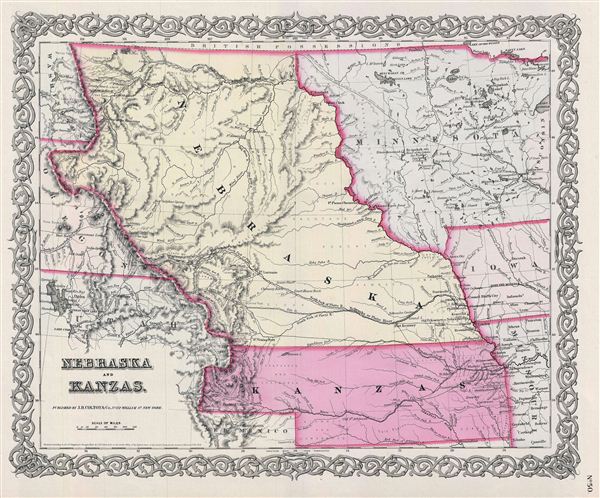 1856 Colton Map of Nebraska and Kansas

Territorial Nebraska at its fullest extending form 'Kanzas' to Canada.

A beautiful 1855 first edition example of Colton's map of Nebraska and Kansas. This is most probably the rarest and most desirable of all Colton atlas maps. Like most of Colton's state maps, this map was derived from an earlier wall map of North America produced by Colton and D. Griffing Johnson. The map details the regions between the Great Salt Lake and Iowa and between the Canadian Border and New Mexico, covering territorial Kansas and Nebraska as well as parts of adjacent Minnesota, Iowa, Missouri and Utah.

This is one of the few maps to focus in the vast and ephemeral Nebraska in its full territorial glory extending from the 40th parallel to the border British America or Canada. This massive Nebraska territory, incorporated in May of 1854 as this map was being prepared, included most of the northern Great Plains, much of the Missouri River Basin, and the eastern part of the northern Rocky Mountains. By 1861 Nebraska Territory would be significantly reduced by the formation of Colorado and the Dakota Territory.

When this map was printed Nebraska and Kansas had only recently been opened for settlement. Consequently it excited considerable interest as both a place of resettlement and a dangerous segment of the transcontinental emigrant routes. At the time, this area was sparsely populated by diverse yet powerful Indian nations including the Comanche, Kioways, Arapahoes, Cheyennes, Sioux, Dacotahs, Poncas, Pawnee's, Omahas, Missouris, Delawares, Shawnee, Osages, Crow, Black, and others - whose territorial claims Colton attempts to note. Colton also identifies three of the routes proposed for the Pacific Railroad, the Stevens Route far to the north, the Beswith Route running through the center of the map, and the Gunnison Route passing through Kansas. Settlement of this region would soon lead to the discovery of gold around Pike's Peak and the 1858-1859 Colorado Gold Rush.

It is interesting to note that Kansas is here spelled with a 'z,' as 'Kanzas.' This spelling corresponds to the original spelling used in documentation incorporating the region as a territory. The spelling 'Kansas' evolved as the standard usage in the 1860s.

This map is hand colored in pink, green, yellow and blue pastels to define state and territorial boundaries. Surrounded by Colton's typical spiral motif border. Dated and copyrighted to J. H. Colton, 1855. Published from Colton's 172 William Street Office in New York City. Issued as page no. 50 in volume 1 of Colton's 1856 Atlas of the World.