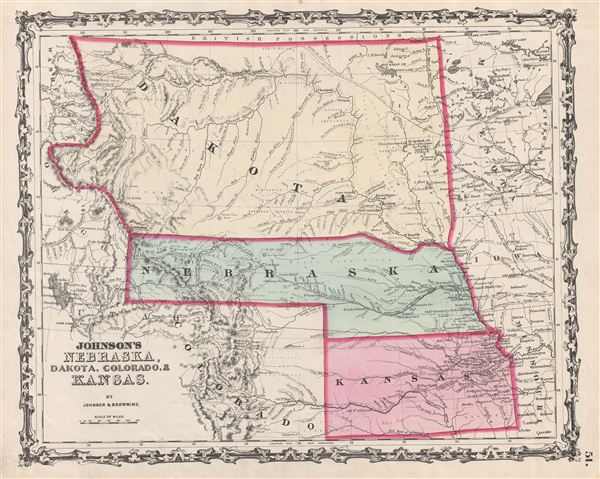 An early pre-Colorado mapping of this region.

From the 1861 Johnson and Browning edition of the Johnson's Atlas, this is one of the rarest and most desirable states of the Johnson's Dakota, Nebraska and Kansas map. In this example Nebraska is drawn with a long panhandle extending from Iowa all the way to Fremont's Peak. To the north, Dakota is a massive and newly partitioned territory extending from Minnesota to the Rocky Mountains and from Nebraska to the border with British Columbia. Shows an embryonic Colorado with a few towns and North Park, Middle Park and South Park noted. This map also notes the three routes proposed for the Pacific Railroad: the Governor Stevens route through Dakota, the Lieutenant Beswith route through Nebraska, and the Captain Gunnison route through Colorado and Kansas. The map references various American Indian Nations throughout as well as countless geographical features including mountains, lakes, passes, rivers, rapids, etc. Features the strapwork style border common to Johnson's atlas work from 1860 to 1863. Published by A. J. Johnson and Browning as plate number 55 in the 1861 edition of Johnson's New Illustrated Family Atlas. This is the last edition of the Johnson Atlas to bear the 'Johnson and Browning' imprint. Subsequent editions reflect Ward's 1862 acquisition Ross C. Browning's shares in the firm.

Very Good. Minor stains in margins. Blank on verso. Original platemark visible.
Looking for a high-resolution scan of this?