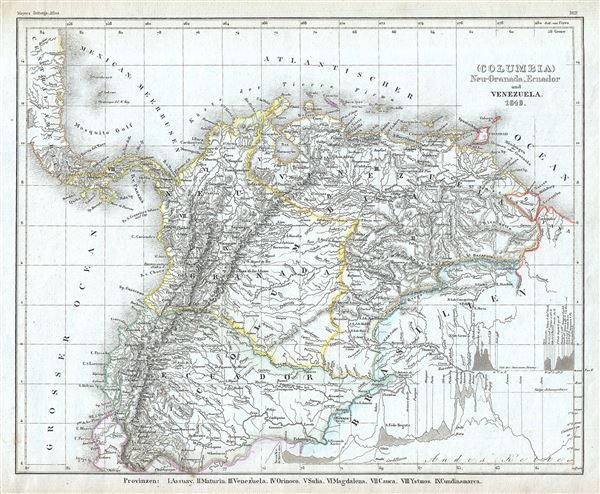 This is an appealing 1849 map of Venezuela, New Granada (Colombia) and Ecuador. It covers from the Pacific to Guyana and from Peru to the Caribbean, including Panama. The lower right quadrant of the map features an elevation profile of the Andes.

Simon Bolivar's vision of Gran Columbia was proven untenable and in 1829 and 1839, respectively, Venezuela and Ecuador became independent nations leading to period of political upheaval and civil war throughout the region. Venezuela would dissolve in the bloody Federal War (1859-1863) in which a significant percentage of the population would perish. Colombia became the Confederacion Granadina, a short lived federal republic that consisted of modern day Colombia and Panama. The Confederacion, facing strong opposition from both liberal and conservative elements, dissolved in 1863 in the midst of the Colombian Civil War.

This map was issued as plate no. 17 in Meyer's Zeitung Atlas. Although all the maps in this atlas are not individually dated, the title page and maps were often updated while the imprint with the date was not, causing confusion to the exact date for some of the maps. Moreover some maps in the atlas were taped in at a later date as an update to the atlas. We have dated the maps in this collection to the best of our ability.