1835 Hall Map of Canada and the Great Lakes 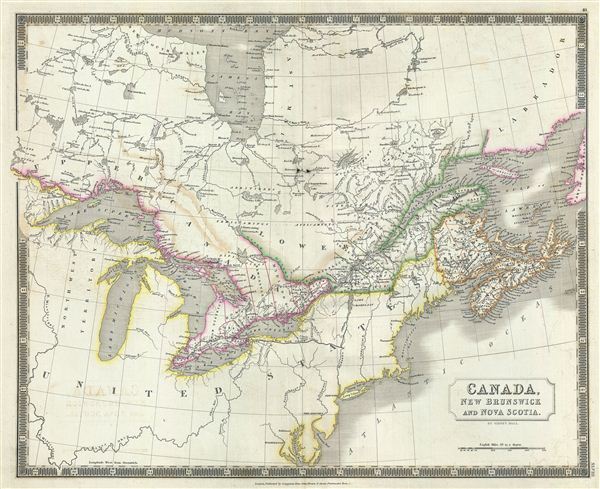 1835 Hall Map of Canada and the Great Lakes

This is a beautiful map of Canada and the Great Lakes from Sidney Hall's extremely scarce 1835 New General Atlas. It covers Upper Canada (Ontario), Lower Canada (Quebec), Nova Scotia, New Brunswick and Prince Edward Island along with part of adjacent Newfoundland. It also shows all five of the Great Lakes: Ontario, Erie, Superior, Michigan and Huron. The New York Grand Canal or the Erie Canal is also specifically noted. Towns, rivers, mountains, railroads, canals, marshes, forests, and various other important topographical details are noted. Elevation throughout is rendered by hachure and political and territorial boundaries are outlined in color.

This map was drawn just prior to the Canadian Rebellions of 1837 against the British Empire that would eventually lead to the United Province of Canada and the adoption of representative government by 1848.  Canada remained a collection of British colonies until its confederation in 1867, when the British colonies of Ontario, Quebec, New Brunswick and Nova Scotia united as Canadian provinces.  Although known as the 'Birthplace of Confederation,' Prince Edward Island would only join the confederation in 1873.