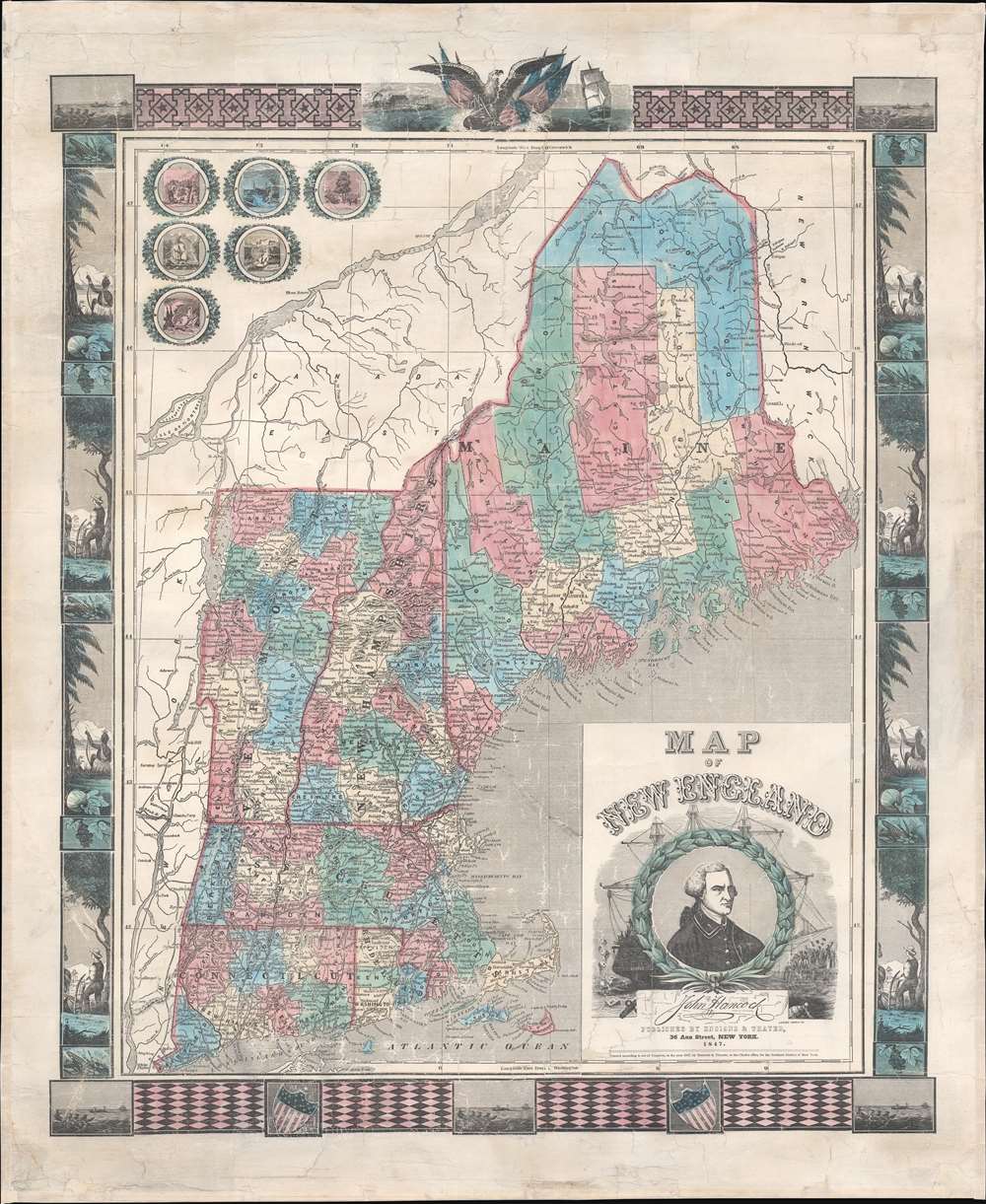 This is an 1847 Ensigns and Thayer map of New England. Coverage includes the states of Connecticut, Rhode Island, Massachusetts, Vermont, New Hampshire, and Maine. Railways are illustrated, along with rivers and scattered mountains.

An elaborate title cartouche, situated in the lower right, bears an engraving of the early American statesman John Hancock (1737 - 1793), along with his famous signature. The scene surrounding Hancock's portrait depicts the Boston Tea Party, an event with which Hancock is associated but did participate. The engraving illustrates the Beaver, a whaler and one of the last ships bearing tea to arrive in Boston. On the night of December 16, 1773, colonists dressed as Indians boarded the ships and dumped over 92,000 pounds of tea into the harbor. One of these ships was the Beaver. The title cartouche, and the elaborate border work, were engraved by Lossing and Barritt, an engraving firm based in New York City.


Benson John Lossing (February 12, 1813 - June 3, 1891) was a popular and prolific American historian and a well known engraver. Benson Lossing was born in Beekman, New York. His father's ancestry can trace its roots back to the earliest Dutch settlers of the Hudson Valley and his mother, Miriam Dorland Lossing, was a Quaker. He was orphaned in 1824, and not long afterward he moved to Poughkeepsie to serve as an apprentice to Adam Henderson, who was a clock and watchmaker and a silversmith. By 1833, Lossing and Henderson had formed a partnership. In 1835, Lossing became part owner and editor of the Poughkeepsie Telegraph and also began publishing the semi-monthly literary paper the Poughkeepsie Casket. The paper's illustrator, J. A. Adams, began to teach Lossing the art of wood engraving. Seeking greater opportunity as an illustrator and journalist, Lossing moved to New York City in 1838. From 1839 to 1841, Lossing edited and illustrated Family Magazine, a weekly owned by J. S. Rothschild. His first book, Outline of the History of Fine Arts was published, beginning his illustrious career as an author. Lossing joined William Barritt in a wood engraving business in 1846, which became one of the largest firms in New York. Lossing began to contemplate writing a narrative sketchbook on the American Revolution around 1848, and the first installment was published in Harper's New Monthly Magazine in 1850. The completed work, Pictorial Field Book of the Revolution was published in 1853. Another of his major works, Pictorial Field Book of the Civil War was published in 1870. Learn More...