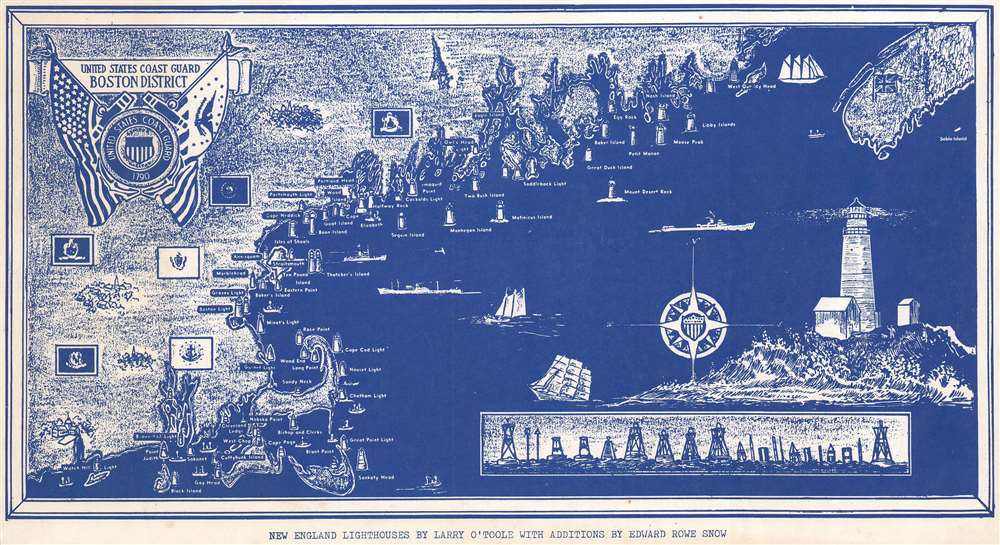 A charming pictorial map of New England lighthouses from Maine to Connecticut.

This is a c. 1945 Larry O'Toole and Edward Rowe Snow pictorial map of New England Lighthouses. Depicting the coastline from Watch Hill and Block Island to West Quoddy Head, numerous lighthouses are illustrated and labeled. Little inland detail is present, only the state flags identify the six states in the region. Boats ply the waters of the Atlantic and a large illustration of a lighthouse occupies the lower right. An inset illustrates several different types of buoys that are also used to mark navigation hazards.

This map was created by Larry O'Toole and has additions done by Edward Rowe Snow. It is not catalogued in the OCLC and is scarce on the private market.


Edward Rowe Snow (August 22, 1902 – April 10, 1982) was an American author and historian. Born in Withrop, Massachusetts, Snow graduated from Harvard University and subsequently from Boston University with an M.A. Snow married Anna-Myrle Haegg on July 8, 1932 with whom he had one daughter. Snow worked as a high school teacher in Winthrop, Massachusetts for a time. He served as a first lieutenant with the XII Bomber Command during World War II and was wounded in North Africa in 1942. He was discharged in 1943 due to the wounds he received. Snow also worked as a daily columnist at The Patriot Ledger, a newspaper in Quiuncy, Massachusetts, from 1957 – 1982. He is widely remembered for his stories about pirates and other nautical subjects. Snow is the author of over forty books many shorter works. Over the course of his life, Snow was the author of over 100 publications, mostly concerning New England coastal history. He is also well remembered for maintaining the tradition of the 'Flying Santa' for over forty years (1936 – 1980). Begun in 1929, the 'Flying Santa' tradition was organized as a way to drop Christmas gifts out of airplanes to lighthouse keepers and their families along the New England coast. Learn More...

Very good. Closed margin tear professionally repaired on verso. Blank on verso.
Looking for a high-resolution scan of this?