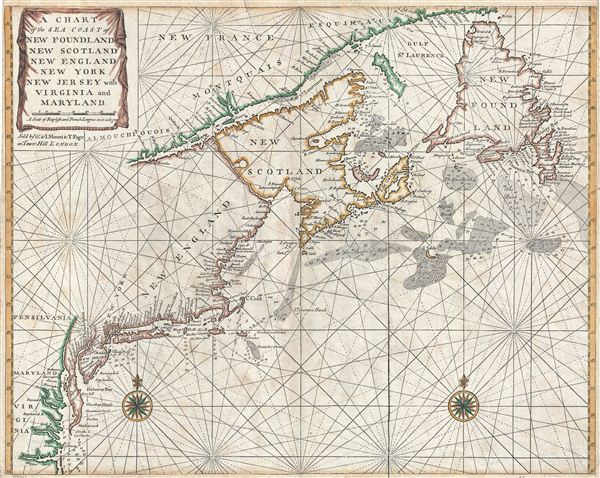 A very attractive c. 1750 example of John Thornton and Mount and Page's important nautical chart or maritime map of the eastern coast of North America from Cape Henry to the Mouth of the St. Lawrence. The map includes the coasts of Virginia, Maryland, New Jersey, New York, Delaware, Massachusetts, Maine, Nova Scotia, and Newfoundland as well as illustrating the Chesapeake Bay and Delaware Bay in full. Shading indicates the various offshore shoals including the Nantucket Shoals, St. Georges Bank, the Shoals of Acadia, the Sable Island Shoals, and others. Depth soundings appear throughout, particularly on shoals and important harbors such as the Chesapeake Bay, New York, and Martha's Vineyard. Various rivers, cities, and towns are noted along the coast including Philadelphia, New York, Boston, among others.

This important and popular chart was issued in various editions of The English Pilot and the Atlas Maritimus for almost 100 years; nonetheless, there are only two known states, of which this is the second. The first state was drawn by John Thornton in 1698 and the second revised by Mount and Page 1749, both were published by Mount and Page. Cartographically the two are similar being based upon the same Thornton data; however, in the second state the author had added decorative draping to the cartouche and changed the title from 'New Found Land' to 'New Foundland.' The Irish map publisher George Grierson also published a pirated version of this map in 1749 and 1767.

Mount, J., and Page, T., The English pilot: describing the West-India navigation, from Hudson's-Bay to the river Amazones ... : also a new description of Newfoundland, New-England, New-York, east and west New-Jersey, Dellavar-Bay, Virginia, Maryland, and Carolina, &c. ... : the whole being very much enlarged and corrected, with the additions of several new charts and descriptions : by the information of divers able navigators of our own and other nations, (London: Mount & Page) c. 1750.