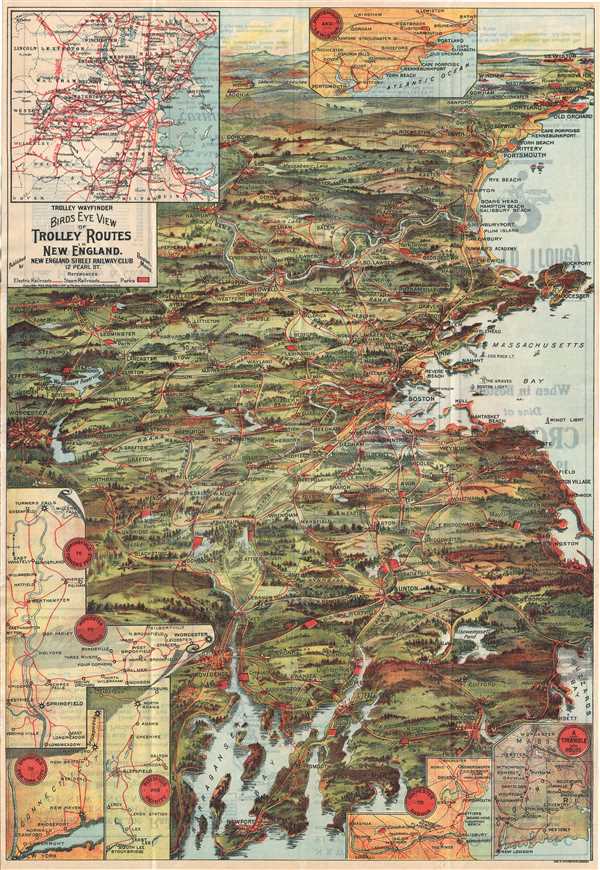 This is a fascinating 1907 bird's-eye view style Trolley Wayfinder pocket map of New England prepared by George Walker and issued by the New England Street Railway Club. This is most likely GeorgeH Walker's most beautiful map and certainly the most attractive of his 'Trolley Wayfinder Series.' Centered on Boston and oriented with north to the right, the map reveals New England from Portland to New York City and Long Island, excluding Cape Cod. It features the extensive trolley lines connecting the major New England cities such as Boston, Providence, Brockton, Plymouth, Manchester, Springfield, Portsmouth, Portland, Worchester, Hartford and others. It also notes railway lines, parks, lakes, rivers and other geographic features. Overall, a charming example showing the extent of the trolley service during the early twentieth century.

This map was created by Geo H. Walker at the behest of the New England Street Railway Club. This view maps was issued in several editions from about 1904 to 1907. This, the 1907, is most likely the most beautiful, as it incorporates the latest chromolithographic techniques for a dramatic full color effect lacking in earlier editions. Other editions of this map were issued by the Metropolitan News Company.