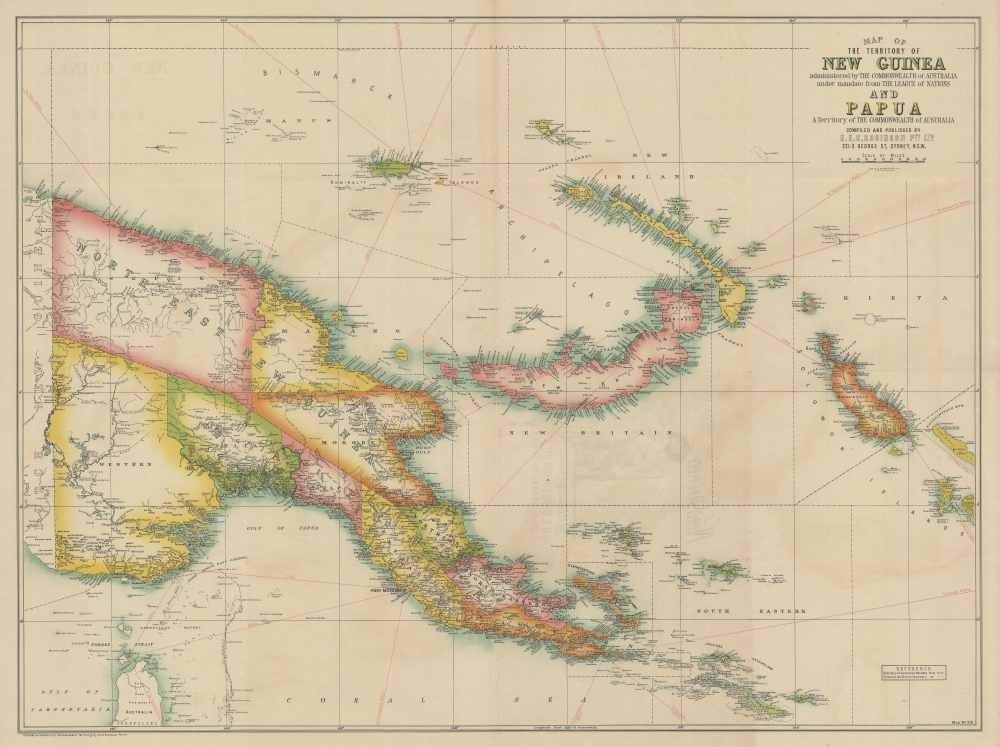 This fine large format map of New Guinea issued c. 1930 by H.E. C. Robinson is perhaps the finest to have been issued during the Australian colonial and mandate period. The map covers the eastern half of the island of New Guinea and is divided with color coding into provinces. The river systems are well mapped with countless indigenous villages and communities identified throughout. The Central Highlands remain blank and unexplored - as it was around this time that the Australian gold prosecutor Michael James 'Mick' Leahy (1901 - 1979) entered this area for the first time, discovering thriving uncontacted aboriginal communities.

Although first discovered by Europeans in the 16th century, New Guinea was largely ignored by the global community due to its remoteness, dense jungle interior, headhunting indigenous peoples, and dangerous surrounding reefs. This changed in the late 1880s, at the height of Europe's global race for colonial territory. The British-Australian colony of New South Wales declared a protectorate over the southeastern quarter of New Guinea, called British New Guinea, in 1884, laying the groundwork for active colonial administration. Although the British initially denied the claim, they formally embraced it in 1906 with the recognition of the Australian Territory of Papua. Meanwhile, Germany occupied the northeastern part of New Guinea from 1884, calling it German New Guinea.

This map was published in Canberra by Herbert Edward Cooper Robinson in the early 1930s. We are aware of only a single edition, although others may exist. All examples are undated, and the map is sufficiently uncommon that no comparative study has been completed. That the map was issued in Canberra, suggests that it was printed by the government press arm of H.E.C. Robinson Ltd., likely for official administrative use. There are no examples recorded in the OCLC, but we are aware of an example at the National Library of Australia and at least 3 on the private market in the last 10 years.

Herbert Edward Cooper Robinson (November 18, 1856 - January 17, 1933) was a Sydney based Australian cartographer active in the late 19th and early 20th centuries. Cooper was born in Winchester, England and emigrated to Australia with his family, settling in Geelong, Victoria. At around 20 - 25 years of age, Robinson moved to Sydney to join the public service, where he mastered cartographic draftsmanship at the Lands Department. In 1882 he left the Lands Office to found a private firm with the Messrs. Higginbotham and Harris, under the imprint of 'Messrs. Higginbotham, Robinson, and Harris.' Within 2 years, both Higginbotham and Harris left the firm, driving it into bankruptcy and leaving Robinson on his own. In 1895, Robinson set up his own map publishing business at Wentworth Court, moving in 1906 to Phillip Street, and in 1913 to permanent location at 221-223 George Street, Sydney. In 1917, the firm formally incorporated as 'H. E. C. Robinson Ltd.' Although based in Sydney, the firm received multiple government contracts and opened annex firms in the Canberra. Robinson is best known for Australian city and regional guides, but he also published Sir Edgeworth David’s gigantic 1932 Geological Map of the Commonwealth of Australia and Donald Mackay's 1930+ aerial surveys of Australia. In addition to his printing work, in 1885, he became a founding member of the Geographical Society of Australasia. He became a fellow of the Royal Geographical Society in the late 1920s. Robinson had two children, Cecil Robinson and Eileen Robinson Brooks, both of whom emigrated to America. His daughter, Eileen, became a famous American stage actress. Learn More...

National Library of Australia, 8081340.
Looking for a high-resolution scan of this?