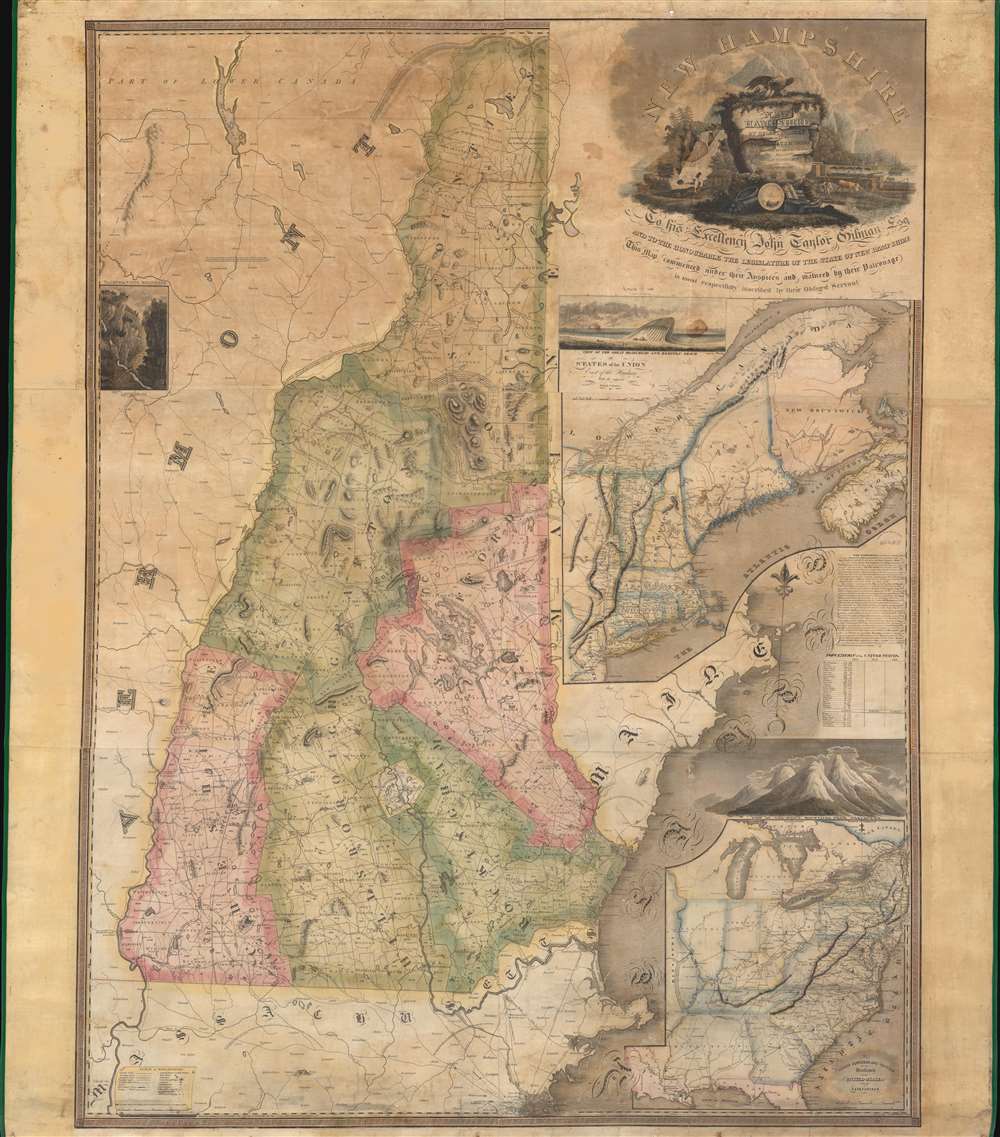 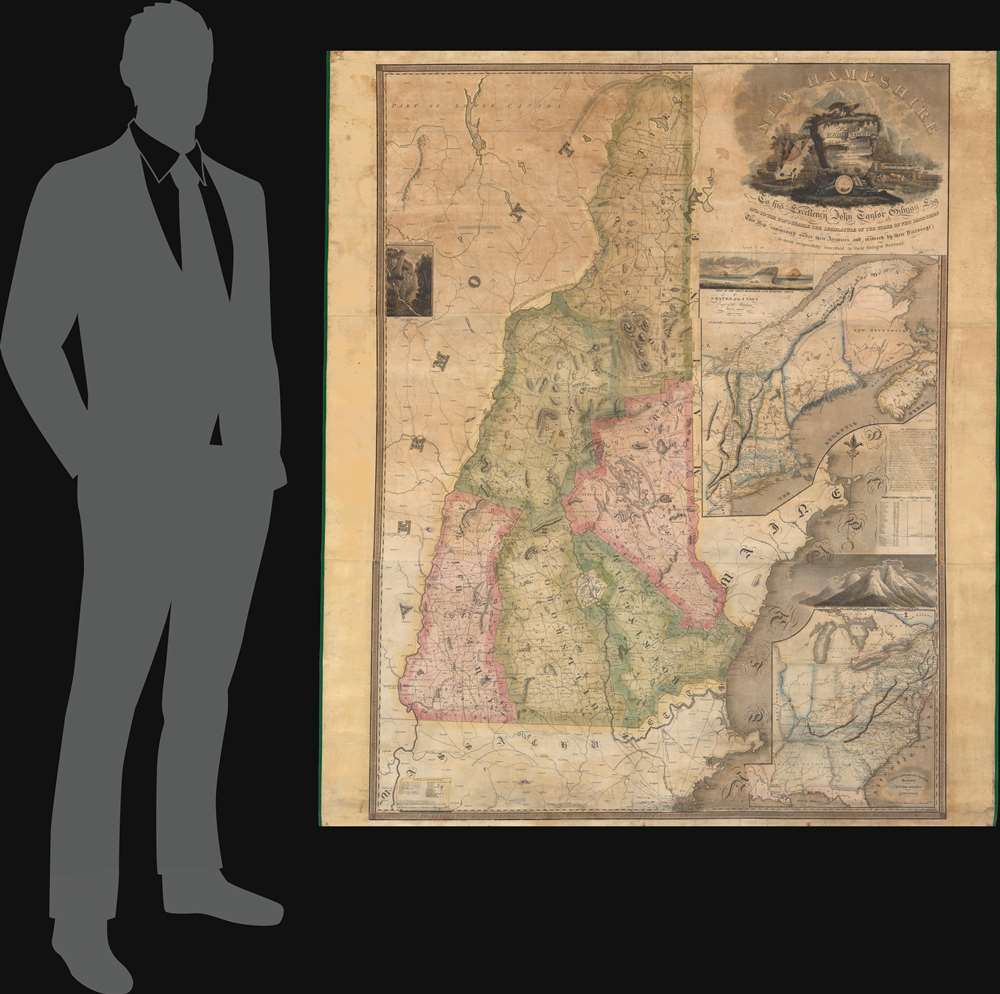 New Hampshire by Recent Survey Made Under the Supreme Authority and Published according to Law by Philip Carrigain Consellor at Law and late Secretary of the State. / New Hampshire To his Excellency Jon Taylor Gilman Esq. and to the Honourable the Legislature of the State of New Hampshire this Map commenced under their Auspices and matured by their Patronage is most respectfully inscribed by their Obliged Servant Philip Carrigain.
1816 (dated)     60.5 x 46.5 in (153.67 x 118.11 cm)     1 : 190080

A scarce and monumental cartographic achievement, this is Philip Carrigain's 1816 map of New Hampshire. Carrigain's map is without a doubt the largest and most important specific map of New Hampshire ever published. This vast and beautifully produced map covers the entire state of New Hampshire as well as adjacent parts of Vermont, Massachusetts (as far as Boston), and Maine. An inset at right details the greater New York and New England region. A secondary inset in the lower right focuses on the United States east of the Mississippi River.

Making of the Map

This map has its origins in 1803. New Hampshire, then under the stewardship of Governor John Taylor Gilman, to whom this map is dedicated, had not been properly mapped since the 1796 map of D. F. Sotzmann. Sotzmann's map, and all previous maps, suffered from a lack of information and generally neglected the northern portions of the state. Gilman signed into law an act that required each community in New Hampshire to produce an accurate survey of their territory, at their own expense, or be fined 150 USD - then a prodigious sum. The task of compiling these surveys into a single large-scale map fell to the New Hampshire Secretary of State, Philip Carrigain. Carrigain, who had no previous cartographic experience, became so consumed with the project that it defined the remainder of his life. As a lawyer and a politician, Carrigain was known for his meticulous nature which he brought fully to bear upon the project.

As Carrigain began to study and compile the various town surveys arriving in Concord, he quickly came to the realization that many were inadequate and contradictory. To assist on this matter, he enlisted the well-known New Hampshire surveyor Phinehas Merrill. Together Merrill and Carrigain identified some 130 surveys of 'insufficient correctness' and set out to address the issue. The surveys themselves were returned to the towns that made them and most were redone - more often than not by Carrigain and Merrill. Since Carrigain had a strict timeline to deliver the finished map, many of the replacement surveys had to be completed in the frigid New Hampshire winter. Carrigain describes laboring in the mountains 'and in the woods to make the necessary surveys, sometimes in the coldest and most inclement season of the year, where he was often without shelter by night and often without food.'

In 1806 the New Hampshire legislature granted the map's exclusive copyright to Carrigain, in return for which he promised to deliver 500 copies to the state. While initially this seemed as if may well be a windfall, it proved problematic for the map and disastrous for Carrigain. The extensive resurveying efforts pushed the expense for producing the map well beyond the budget initially allocated. In 1807, Carrigain applied for and was granted a loan from the state of an additional 5000 USD to use towards the map's completion.

Several more years passed without delivery of the promised map. Carrigain repeatedly requested and was granted extensions until June of 1811 when the state reduced the required number of promised maps from 500 to 250, so long as they were delivered in 18 months. By this time, Carrigain was no longer New Hampshire Secretary of State and elements hostile to his political views had come into power. Nonetheless, as copyright holder and loan holder, the responsibility of completing the map fell solely on Carrigain's shoulders. Fortunately, the map was nearly ready for printing.

Blinded by the Work

Carrigain temporarily relocated to Philadelphia, where America's best printers and engravers were based. There he hired D. and G. Fairman, well known Philadelphia engravers, to help him produce the exacting and highly detailed map plates. Carrigain also apparently did much of the map engraving himself - purportedly ruining his eyesight in the pursuit perfect minute detail. For the cartouche element he employed the Irish artist John James Barralet and the Philadelphia portrait engraver William Harrison. These names appear in fine lettering just under the title cartouche. The map's three decorative views: 'The Gap in the White Mountains' (Crawford Notch), the 'Great Boars Head and Hampton Beach, and the 'White Mountains from Shelburne' are based on drawings by James Kidder and were engraved by Abel Bowen. Though inaccurate (the Crawford Notch view is reversed), they are significant as the first published illustrations of the White Mountains.

At last complete, the map was finally issued in 1816 and received immediate acclaim for its beauty, accuracy, and detail. In 1874, New Hampshire state Geologist Charles Hitchcock, wrote that Carrigain's map, 'is exceedingly credible … I do not recall the existence of any state map in the country so good as this, which was published at so early a period.' This map significantly influenced the development of town and county boundaries throughout New Hampshire. It is furthermore the first accurate survey of northern New Hampshire. Carrigain's map remained the definitive map of New Hampshire for the subsequent 40 years.

Carrigain himself returned to New Hampshire, resumed his legal practice, and made no further maps. He did attempt to promote and sell his great map of New Hampshire, for which he held a lifelong copyright. A surviving prospectus suggests that he attempted to sell the map by subscription with a price scale associated with format and coloring. Unfortunately, Carrigain never recovered financially from the expense of publishing his cartographic masterwork and ultimately died in poverty. His map however, which made him a historic figure and impoverished him, is forever known as the 'Carrigain Map'.

Carrigain's original 1812 manuscript map survives and is in the possession of the New Hampshire Historical Society. The first edition was issued in 1816. Rumsey claims this to be the only edition; however, evidence suggests that a second, extremely scarce edition was commissioned by Carrigain in 1818. A final edition, reduced and set in photolithograph monochrome, was issued by Charles Hitchcock in 1878. Mica Stark, a biographer of this map, has identified examples of Carrigain's map in the New Hampshire State Library, the New Hampshire Historical Society, Dartmouth College, and the Library of Congress, the Hermitage (home of Andrew Jackson). We are aware of additional examples in the David Rumsey Collection, Cornell, Harvard, the Boston Athenaeum, Oberlin, and Stanford and in various private collections.

A scarce and magnificent piece that no serious collection focusing on early state plans, American cartography, New Hampshire, or New England can be without.

Philip Carrigain (February 20, 1772 - March 16, 1842) was an American cartographer, surveyor, and politician active in New Hampshire during the late 18th and early 19th centuries. Carrigain was born in Concord, New Hampshire and attended Dartmouth College. He graduated with a law degree in 1794 and after practicing law for several years entered New Hampshire politics. From 1805-1808 he was New Hampshire's Secretary of State. Historian Amos Hadly wrote of Carrigain, "never has there been in New Hampshire one holding the office of executive recorder more talented and versatile, more witty and genial, more gentlemanly in manners, and more artistic in tastes." He had a knack for words and coined the state's nickname, "The Granite State". Carrigain is best known however, for his monumental wall map of New Hampshire, published in 1816. This map, most likely the most important American map of New Hampshire ever published, is admired for its extraordinary accuracy, detail, elegance, and overall beauty. The meticulous work of overseeing the engraving of the New Hampshire map apparently left Carrigain's eyesight sorely diminished. This great map, commonly called the 'Carrigain Map', was his only published cartographic work and produced no further maps, returning instead to the legal profession. Carrigain lived out his final days in a large home in Concord called, "Carrigain Commons" or mockingly, "Carrigain's Folly", for he built the house for a young bride who abandoned him at the altar. Carrigain sadly died in poverty on March 16, 1842 and was interred in the Old North Cemetery in Concord, New Hampshire. He is remembered by his great map and, of course, Mt. Carrigain, which was named after him. Learn More...