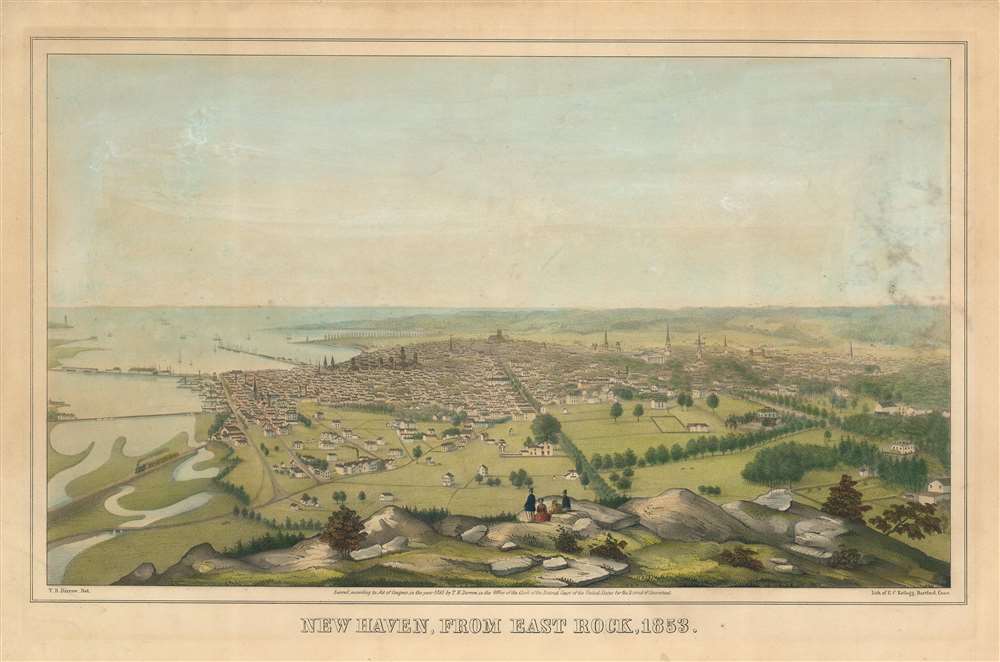 This is an extremely rare 1853 lithograph view of New Haven, Connecticut, as seen from East Rock by Titus H. Darrow and the firm of E. C. Kellogg. The view looks south-southwest on New Haven from East Rock, a local high point. The large buildings of Yale University are evident just left of center. The view reviews a bustling port, with numerous ships and a long pier. Several bridges, including an active railroad bridge, exit New Haven to the east. In the foreground, picnickers on East rock observe the town.

This view was drawn by Titus H. Darrow and published by the firm of E. C. Kellogg of Hartford. The view is rare. Reps lists examples at the New York Public Library and The New Have Colony Historical Society. We have identified a third example at Yale University. It does not appear in the OCLC.

Titus H. Darrow (1814 - January 9, 1881) was an American viewmaker and visual artist based in Connecticut. Darrow worked with the Kellogg firm to produce several finely executed lithographs of Connecticut towns. He typically preferred to work from an elevated position rather than render the view from an imaginary perspective. In 1859 he was the Plainville Justus of the Peace and in the 1860s he became treasurer of the town of Plymouth, Connecticut. He died in 1881, leaving his wife, Sarah Jane Camp / Darrow, a widow.


Kellogg (1836 - 1946) referrers to a series of partnerships based in Hartford, Connecticut, working under different imprints active from 1836 to 1946. The firm was initially founded by Daniel Wright Kellogg (1807 - 1864), who had studied lithography in Boston. The 'D. W. Kellogg' imprint was active from 1836 - 1841. When Daniel emigrated westward in 1836, the firm was taken over by his younger brothers, Edmund Burke Kellogg (1809 - 1872) and Elijah Chapman Kellogg (1811 - 1881), who changed the imprint to 'E. B. and E. C. Kellogg'. This was the active imprint until 1848, when the brothers partnered with John C. Comstock. In a partnership that lasted until 1850 under the imprint of 'Kellogg and Comstock.'. From 1851 to 1854 E. C. Kellogg worked independently under his own 'E.C. Kellogg' imprint. He again partnered with his brother in 1855, reviving the 'E. B. and E. C. Kellogg' imprint, which remained active until 1866. In 1867, Edmund and Elijah sold their share of the company to William H. Bulkeley (1840 - 1902), but a third Kellogg, Elijah's son Charles B. Kellogg, retained an interest in the firm and it continued to operate as 'Kellogg and Bulkeley' until the firm merged with Case, Lockwood and Brainard to from the still active Connecticut Printers Inc. The Kelloggs frequently worked with other printers, including Edward Ensign, Horace Thayer, and Titus H. Darrow.