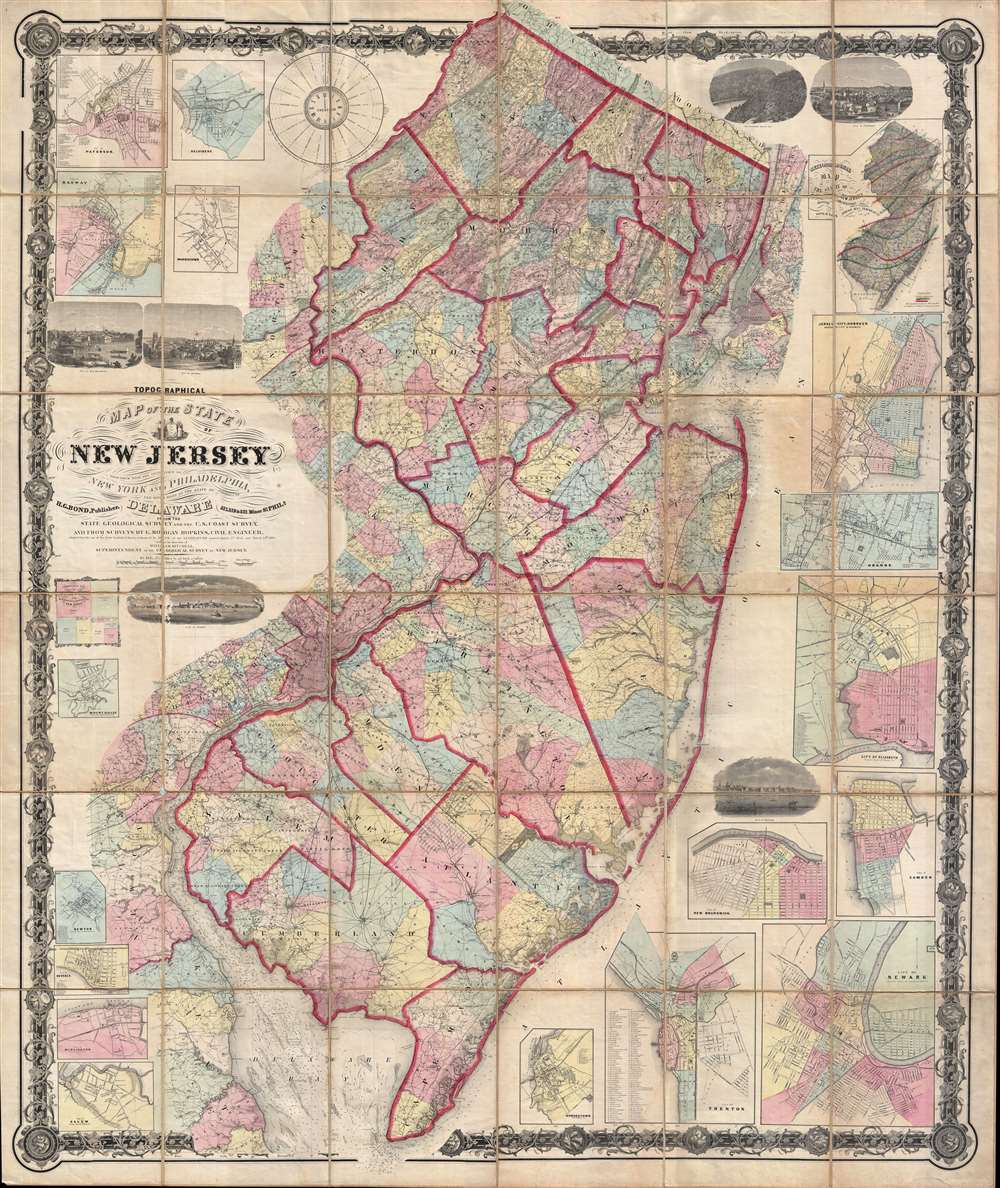 The largest and most detailed map of New Jersey to appear in the 19th century - a seminal production.

Cartographically this map is derived from the earlier work of the State Geological Survey (from work commenced in 1836 under Henry Darwin Rogers), the U.S. Coast Survey (particularly for the Delaware Bay, New York Harbor, the New Jersey coastline, and in various river ways), and further survey work completed by the civil engineer G. Morgan Hopkins under the direction of William Kitchell, superintendent of the Geological Survey of New Jersey. Work on this map began by order of legislature in 1854 when William Kitchell was installed as State Geologist. Kitchell began the work of compiling the map with the assistance of his staff, which included George H. Cook (assistant Geologist), Henry Wurtz (Chemist and Mineralogist), and egbert Viele (Topographical engineer). Two years later, in 1856, the New Jersey legislature, citing financial difficulties, suspended funding of the map abolishing the office of state geologist. Over the subsequent four years Kitchell lobbied furiously for reinstatement and, in 1860, was granted permission to access the 'apparatus and materials belonging to the state survey' in order to, at his own expense, complete his grand map. The result, privately published later that year, is this awesome production, a landmark in the mapping of New Jersey and enormous advancement over the 1828 Gordon map.

This map is scarce. The OCLC identifies two examples in the collections of Princeton University and the University of Massachusetts, Amherst. We have further identified examples at the New York State Library, the Fairleigh Dickinson University Library, and the Chester Public Library. There are two further examples in private hands. The present map seems to be the only known example in case rather than wall map format - a feature that greatly enhances its stability and overall state of preservation. A scarce and important map for any serious collection focused on New Jersey.

Very good condition. Dissected and mounted on linen in 36 page sized panels. Original linen backing brittle and worn, especially at fold intersections, but the map itself exhibits no loss and is fine condition.