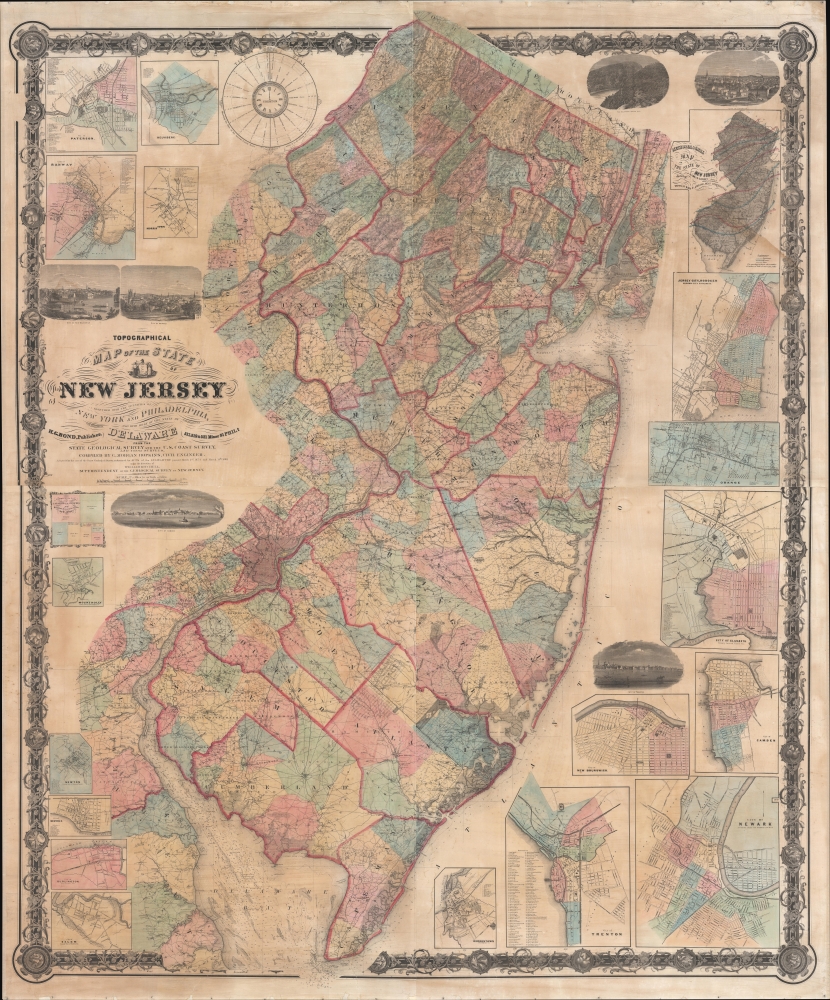 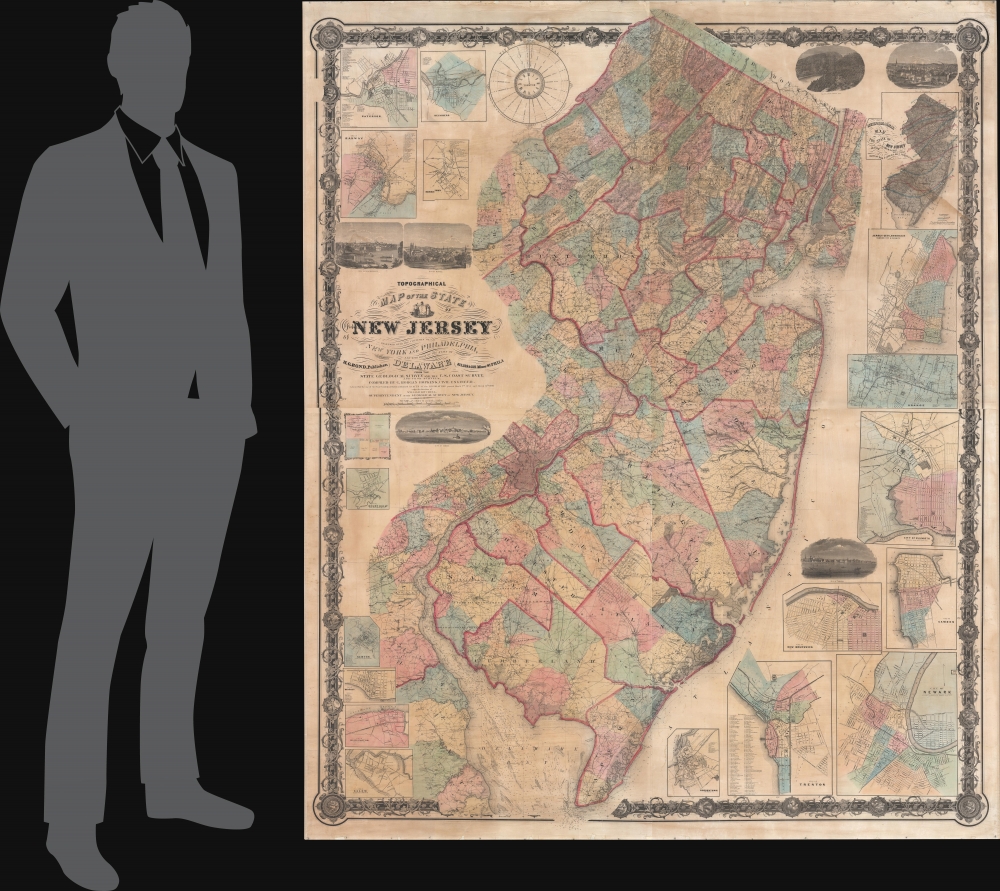 Magnificently detailed, visually stunning, and monumentally proportioned, this is William Kitchell's seminal 1861 wall map of New Jersey. This is the largest most detailed map of New Jersey printed in the 19th century.

This map covers the entire state of New Jersey as well as the Delaware Bay, and adjacent parts of New York, Pennsylvania (particularly Philadelphia), and Delaware. Breathtaking detail throughout. The cartographers attempted to identify every road, hill, farm, hotel, post office, river, creek, swamp, store, distillery … and nearly every non-urban building in the state. The rivers, bays, and coast lines, especially around New York Harbor and the Delaware Bay, feature countless depth soundings and other nautical references no doubt derived from the work of the U.S. Coast Survey. The whole is surrounded by a grapevine style border further embellished with floral motif decorative medallions.

Cartographically this map is derived from the earlier work of the State Geological Survey (from work commenced in 1836 under Henry Darwin Rogers), the U.S. Coast Survey (particularly for the Delaware Bay, New York Harbor, the New Jersey coastline, and in various river ways), and further survey work completed by the civil engineer G. Morgan Hopkins under the direction of William Kitchell, superintendent of the Geological Survey of New Jersey. Work on this map began by order of legislature in 1854 when William Kitchell was installed as State Geologist. Kitchell began compiling the map with the assistance of his staff, which included George H. Cook (assistant Geologist), Henry Wurtz (Chemist and Mineralogist), and Egbert Viele (Topographical engineer). Two years later, in 1856, the New Jersey legislature, citing financial difficulties, suspended funding of the map abolishing the office of state geologist. Over the subsequent four years Kitchell lobbied furiously for reinstatement and, in 1860, was granted permission to access the 'apparatus and materials belonging to the state survey' to, at his own expense, complete his grand map. The result, privately published later that year, is this awesome production, a landmark in the mapping of New Jersey and enormous advancement over the 1828 Gordon map.

This map was first published in 1860 by H. G. Bond and William Kitchell. It is based on surveys compiled by Kitchell and G. M. Hopkins. The present example is the 1861 second edition. This map is scarce. The OCLC identifies two examples in the collections of Princeton University and the University of Massachusetts, Amherst. We have further identified examples at the New York State Library, the Fairleigh Dickinson University Library, and the Chester Public Library. There are three further examples in private hands. An important map for any serious collection focused on New Jersey.


G. M. Hopkins Company (1865 - 1940; 1943 - today) was an American civil engineering and surveying firm based in Philadelphia. Founded in Philadelphia in 1865 by brothers G. Morgan and Henry Hopkins as G.M. Hopkins and Company, the firm focused primarily on real estate plat maps of the Eastern seaboard. It is unknown exactly who G.M. Hopkins was. The 'G.M.' either stands for Griffith Morgan or George Morgan. Three possibilities exist for this happenstance: it is possible that the compilers of early Philadelphia directories were negligent, G.M. Hopkins changed his first name, or two G.M. Hopkins worked for the firm. The firm published 175 plat maps atlases depicting cities, counties, and townships in eighteen states and the District of Columbia, and were among the first to create a cadastral atlas. Henry Hopkins supervised much of the surveying work and was credited with creating two maps in 1860 and 1861. He also served as the chief assistant. G.M. retired in 1900 (and died the following year), which allowed Henry to take control of the business which he renamed the G.M. Hopkins Company in 1902. Henry retired in 1902 and sold the business to George B.C. Thomas, who had been working for the firm since 1896 as an engraver. Henry Hopkins died in 1921. The G.M. Hopkins Company was purchased by the Franklin Survey Company of Philadelphia in 1943 and continued publishing atlases using the Hopkins imprint. In 1986 the company was renamed Franklin Maps and is still in operation today. Learn More...


Robert Pearsall Smith (February 1, 1827 - April 17, 1898) was an American map maker active in Philadelphia from the middle to late 19th century. Smith was born to a Quaker family in Philadelphia, all librarians and publishers. Robert Pearsall originally ran a law bookstore at 19 James Street, Philadelphia. It was not until 1846 that Smith began producing maps in collaboration with this father, John Jay Smith, and brother, Lloyd P. Smith. One year earlier, in 1845, John Jay, then librarian at the Library Company of Philadelphia and Loganian Library, acquired the American rights to the anastatic process of transfer lithography. In February of 1846 he and his two sons founded the Anastatic Office, a printing concern based on the anastatic process located at 317 Market Street, Philadelphia. The Anastatic Office produced numerous copies and reissues of historic documents and maps from the Library Company's collection before being dissolved in 1847. In the same year Robert Pearsall opened a printing establishment under his own name at 144 Chestnut Street. In 1858, he joined forced with the Swiss-American engraver Frederick Bourquin (1808 - 1897) under the imprint 'F. Bourquin and Company' (602 Chestnut Street). Smith retired suddenly and inexplicably from the printing business around 1865. Smith was also deeply religious, a lay leader in the Holiness Movement in the United States and the Higher Life Movement in Great Britain. Smith and his wife, Hannah Tatum Whitall, first crossed the Atlantic to preach in England, Germany and Switzerland in 1873. They returned in 1875, preaching in Brighton, where Smith supposedly had an affair with an American writer. In, 1888, his entire family moved to England. Learn More...