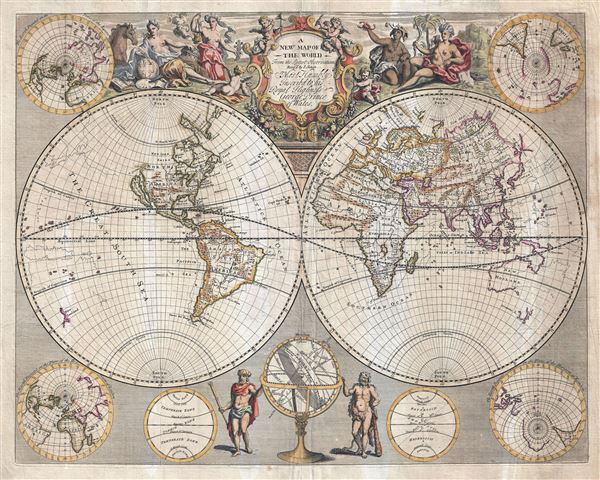 An impressive 1721 double hemisphere map of the World by John Senex. This map covers the entire world in two hemispheres. It appeared during a period of rapid globalization and discovery. Senex here attempts to reveal both the most up-to-date cartographic data as well as previous notions. He does this by rending earlier mappings with ghostlike outline. Here we can see revising cartographies in Asia, the South Pacific, and Africa. To our knowledge, Senex was the only cartographer to make use of this novel technique.

Despite he attempts at accuracy, Senex's map preserves and propagates a number of cartographic errors and anomalies. The most striking of this is his rendering of California as an Island. The idea of an insular California first appeared as a work of fiction in Garci Rodriguez de Montalvo's c. 1510 romance Sergas de Esplandian, where he writes

Baja California was subsequently discovered in 1533 by Fortun Ximenez, who had been sent to the area by Hernan Cortes. When Cortez himself traveled to Baja, he must have had Montalvo's novel in mind, for he immediately claimed the Island of California for the King. By the late 16th and early 17th century ample evidence had been amassed, by explorations of the region by Francisco de Ulloa, Hernando de Alarcon and others, that California was in fact a Peninsula and not and island. However, by this time other factors were in play. Francis Drake had sailed north and claimed 'New Albion' near modern day Washington or Vancouver for England. The Spanish thus needed to promote Cortes' claim on the 'Island of California' to preempt English claims on the western coast of North America. The significant influence of the Spanish crown on European cartographers caused a major resurgence of the Insular California theory. Shortly after this map was made Eusebio Kino, a Jesuit missionary, traveled overland from Mexico to California, proving conclusively the peninsularity of California. Just to the north of California, the S. of Annian extends inland - this is doubles a reference to the purported discoveries of Sir Francis Drake.

The partial mapping of Australian (New Holland) and Tasmania (Van Diemen's Land) is also of particular interest. Senex first relocates New Holland, as Australia was then known, several degrees to the west - placing reasonable close to its actual positon. However, since much of the continent remained unexplored, he leaves the eastern shores open. He follows a similar approach with the northern shores of Tasmania or Van Diemen's Land. Australia is also notably connected to New Guinea - a popular assumption until the time of Cook, some 60 years later.

The main map is surrounded by smaller planispheres offering polar projections, as well as elaborate decorative cartouche work. The cartouche work, which is most elaborate along the upper borner, includes allegorical illustrations of the four conteninents as women. Europa appears on the left, mapping the world in a gesture of global domination. Asia appears to her right as a lavish and exotic trading partner. Africa, dark skinned, wears an elephant's skull and hold aloft a scorpion - suggestive of savagery. Far to the right, America wears and elaborate feathered headdress and hold a bow. At the bottom center, Hercules and Ulysses hold, between them, an armillary sphere. The map is dedicated to George, Prince of Wales (1714-1721).
There is some speculation that this map is based upon an earlier c. 1690 map by Christopher Browne. This is supported by the commentary in the title cartouche which suggested that Senex 'Revised' the map. However, no earlier states are known nor are any known examples of the speculated Christopher Browne map known to exist.

John Senex (1678 - 1740) was an English engraver and map maker active in London during the first half of the 18th century. Senex was born to upper middle class parents in Shropshire, England. As a young man, he was apprenticed to Robert Clavell, a London bookseller and member of the Stationers' Company, under whom he mastered the arts of engraving and printmaking. Around 1702 Senex completed his apprenticeship and established himself as a printer and bookseller in the Strand. A year later Senex partnered with Jeremiah Seller and Charles Prince, the successors to the important mapmaker John Seller, and relocated to Cornhill. This was likely Senex's first introduction to mapmaking though he seems to have taken to it with abandon. In the subsequent years Senex established himself as one of the most prominent cartographers in London, publishing a number of beautiful and important maps that today rank among the finest examples from the Golden Age of British Cartography. In addition to a large corpus of flat maps, Senex also produced a number of important and highly desirable globes. Eventually Senex dissolved his partnership with Seller and Prince and relocated to Fleet Street, where he maintained offices until his death in 1740. Senex was succeeded by his widow, Mary Senex, who continued to publish and update his works until about 1755, when the remaining globe and map plates were sold to James Ferguson. Learn More...