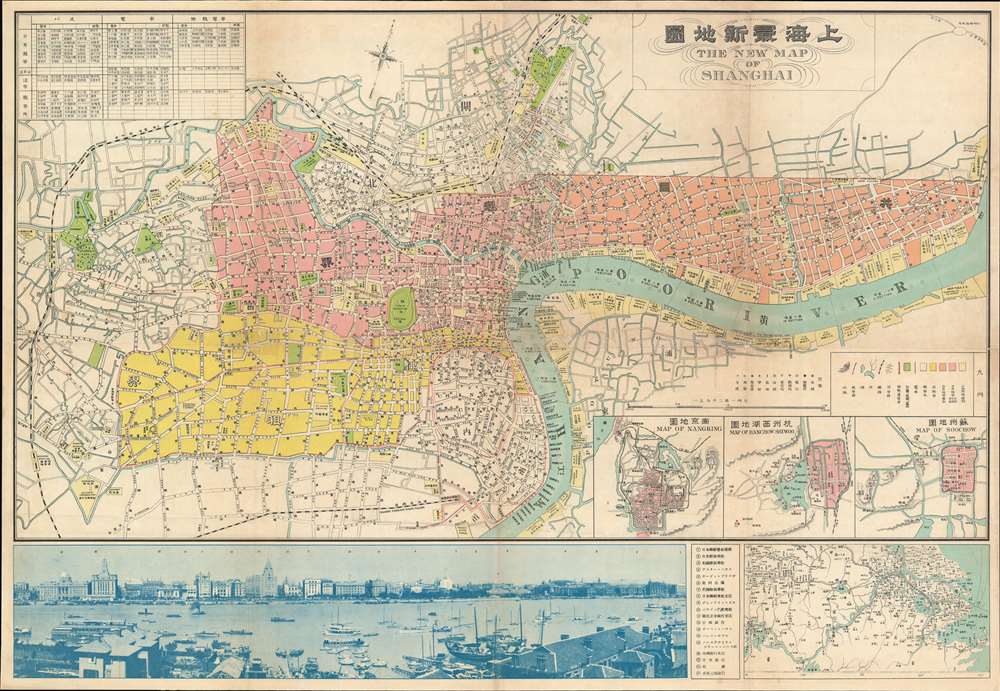 Scarce map of Shanghai at the beginning of the Second Sino-Japanese War.

This is a rare and beautiful bilingual 1933 Fusazō Sugie city plan or map of Shanghai, China. Published only two years after the Second Sino-Japanese War began, the map depicts cebtrak Shanghai including the Chinese Quarter, the French Concession, the International Settlement, and the English Quarter (along the Bund), among many other sites. Shanghai's cosmopolitan International Settlement is highlighted in orange (USA), pink (Great Britain), and yellow (France). Nineteen important buildings along the Bund are carefully noted and can be referenced via a table to the right of the view. These include the first HSBC Bank, the British Club, the Peace Hotel, and the Customs House. A lovely vintage panoramic photograph of the Bund adorns the map's bottom border. Of note, a large inset in the lower right corner illustrates the greater Shanghai area and three smaller insets detail Nanking (Nanjing) Hanchow Shiwoo (Hangzhou), and Soochow (Suzhou).

The Bund is a waterfront area in central Shanghai. This part of the city centers on the section of Zhongshan Road within the former Shanghai International Settlement, which runs along the western bank of the Huangpu River, facing Pudong, in the eastern part of Huangpu District. The Bund usually refers to the buildings and wharves on this section of the road, as well as some adjacent areas. It is one of the most famous tourist destinations in Shanghai and building heights are restricted in this area. It is worth noting the absence of the Shanghai Mansions, later renamed Broadway Mansions, from the right side of the Bund photograph. This iconic building was completed in 1934, meaning that it was still under construction when this photo was taken.

The Shanghai Bund has dozens of historical buildings, lining the Huangpu River, that once housed numerous banks and trading housing from the United Kingdom, France, United States, Italy, Russia, Germany, Japan, Netherlands and Belgium, as well as the consulates of Russia and Britain, a newspaper, the Shanghai Club and the Masonic Club. The Bund lies north of the old walled city of Shanghai. This was initially a British settlement. A building boom at the end of the 19th century and the beginning of the 20th century led to the Bund becoming a major financial hub of East Asia. The former French Bund, east of the walled city was formerly more a working harbor.

There are multiple maps of the same name and lineage, and least two editions of this specific map. The first, of which the presently offered map is an example, was issued in 1933. That edition features statistical tables in the upper left, inset maps in the lower right of Nanking (Nanjing), Hanchow Shiwoo (Hangzhou), and Soochow (Suzhou), as well as a map of the course of the Yangtze River. A second edition appeared in 1937, after the Japanese invasion of Shanghai. That example moves the three inset city maps to the upper left corner, replacing the statistical table. In the lower right, the Yangtze River Map is replaced with a map of Greater Shanghai, a development area roughly corresponding to the Zhabei District (闸北). The photo of the Bund has also been revised, most notably, the later edition features the Shanghai/Broadway Mansions, constructed in 1934. Today all examples have become quite rare.

Good. Exhibits some wear along original fold lines and some toning. Laid down on archival tissue for stability.