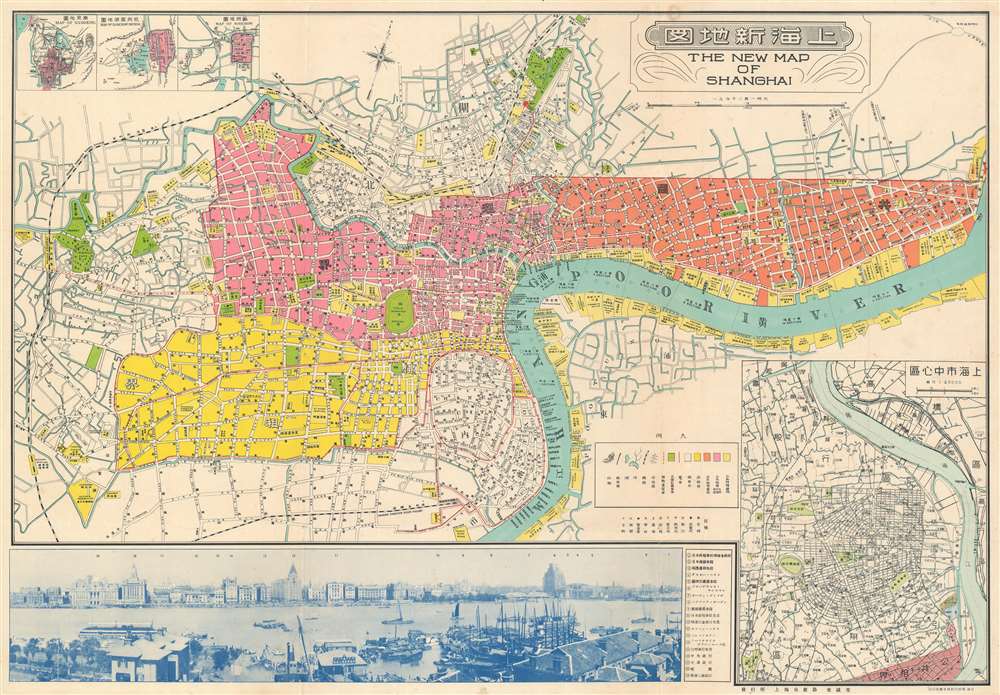 This is a rare and beautiful bilingual 1937 map of Shanghai, China. It was made just around the start of the Second Sino-Japanese war and World War II. Printed by the Japanese in the 12th year of Hirohito's reign, it depicts downtown Shanghai including the Chinese Quarter, the French Concession, the English Quarter (along the Bund) etc. Shanghai's cosmopolitan international settlement is highlighted in Orange (USA), Pink (Great Britain), and Yellow (France). Nineteen important buildings along the Bund are carefully noted and can be referenced via a table to the right of the view. These include the first HSBC Bank, the British Club, the Peace Hotel and the Customs House. There is also a lovely vintage panoramic photo of the Bund along the bottom of the map.

The Shanghai Bund has dozens of historical buildings, lining the Huangpu River, that once housed numerous banks and trading housing from the United Kingdom, France, United States, Italy, Russia, Germany, Japan, Netherlands and Belgium, as well as the consulates of Russia and Britain, a newspaper, the Shanghai Club and the Masonic Club. The Bund lies north of the old walled city of Shanghai. This was initially a British settlement. A building boom at the end of the 19th century and the beginning of the 20th century led to the Bund becoming a major financial hub of East Asia. The former French Bund, east of the walled city was formerly more a working harbor.

The Shanghai International settlement was created in 1863 when the British and American Shanghai enclaves merged. These concessions had been granted to England and the United States as part of the Unequal Treaties that followed the Opium Wars. From about 1854 the settlements were governed by the Shanghai Municipal Council, a British dominated board of government officials and powerful merchants. The board issued restrictions limiting Chinese habitation on International Settlement territory and oversaw the construction of public services, including Trams, a sewage system, highways, and port buildings. The International settlement expanded several times in the late 19th and early 20th century. It became an enclave of peace and prosperity when the Japanese invaded Shanghai in 1837 but this abruptly came to an end with the Japanese bombing of Pearl Harbor and subsequent invasion of the International Settlement in 1941. After the war the International Settlement lands were returned to Chinese sovereignty.

There are several editions of this map and the differences are primarily restricted to the insets. The present example, one of the scarcer, features insets of Nanking (Nanjing), Hanchow Shiwoo (Hangzhou), and Soochow (Suzhou), as well as of the greater Shanghai vicinity. Today all examples have become quite rare.

Fusazō Sugie (fl. c. 1910 – 1950), 杉江房造, was a Japanese bookseller, printer, and active in Shanghai during the final years of the Qing. Fusazō was the owner of the Nihon-do Japanese Bookstore (日本堂書店) in Shanghai, located at 155 Hong-Kou-Wen Street and 237 Woosung Road. He issued numerous guidebooks, souvenir photo books, and maps associated with Shanghai and Nanjing, many of which were bilingual and marketed to American and European tourists and servicemen. His bilingual New Map of Shanghai, published in various states and editions from 1931 well into the 1940s, is his most notable cartographic work.

Very good. Minor wear and toning along original fold lines.
Looking for a high-resolution scan of this?