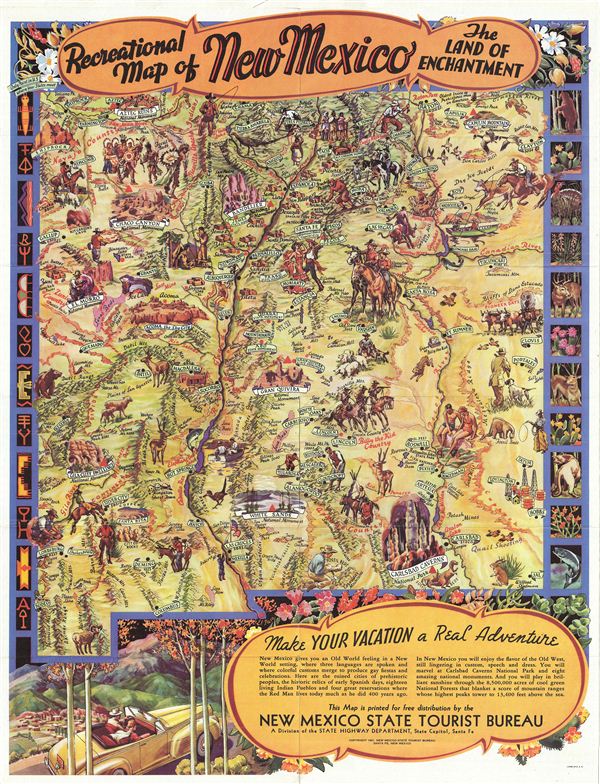 This is an extraordinary example of Wilfred Stedman's beautifully illustrated 1941 map of New Mexico. It covers the state of New Mexico from Shiprock to El Paso. Notes the only point in the United States common to four states, where the boundaries of Utah, New Mexico, Arizona and Colorado meet. Many recreational areas, national monuments and various points of interest are identified including the Chaco Canyon, Gran Quivira, Acoma the sky city, Aztec Ruins, White Sands, Carlsbad Caverns National Park among numerous others. Stedman's map also identifies Billy the Kid country, the Grave of Billy the Kid, Apache country, several fossil beds, lava beds, caves, rivers, lakes etc. Throughout, the map is fantastically illustrated with cowboys, Native American Indians, vacationers, birds, animals, Spanish dancers, etc. The lower right quadrant of the map features a short note entitled 'Make Your Vacation a Real Adventure.' Verso contains information about the various monuments, parks, sports, climate and other useful information. The cover features an illustration of a group of women around an old wagon. The map was prepared and illustrated by Wilfred Stedman for free distribution during the Coronado Cuarto Centennial Celebrations by the New Mexico State Tourist Bureau, a division of the State Highway Department, State Capitol, Santa Fe.