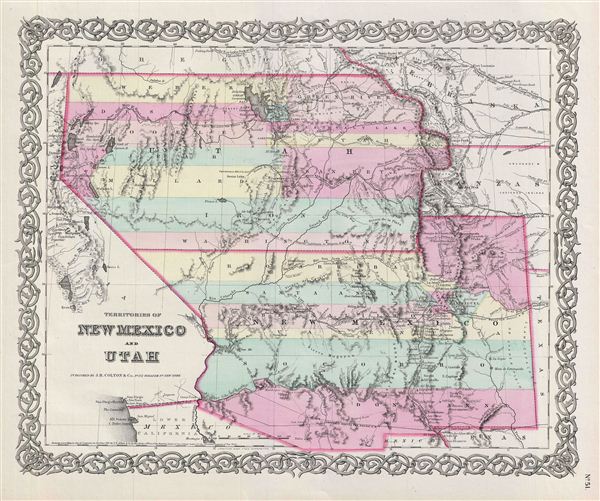 An iconic map of the American southwest.

A beautiful 1855 first edition example of Colton's map of territories of New Mexico and Utah. This iconic map is one of the rarest and most desirable of all Colton atlas maps. Like most of Colton's state maps, this map was derived from an earlier wall map of North America produced by Colton and D. Griffing Johnson. The map details the regions between California and Texas and between Oregon and Mexico. Covers territorial New Mexico and Utah including the modern day states of Nevada, Colorado, and Arizona. Colton identifies a number of important emigrant and exploratory routes including Fremont's, Kearney's and the Spanish Trail from New Mexico to Los Angeles. Most of the cartography follows the discoveries and explorations of John Fremont.

Colton notes the three proposed routes for the Pacific Railroad, a subject of considerable pubic and economic interest at the time: The Beswith route runs across the north of the map passing just south of Great Salt Lake. In the middle of the map the Gunnison Route is shown, as well as the site, near Lake Sevier, where Captain Gunnison was killed by the Ute Indians. Across the bottom of the map, the Parke route, which precipitated the Gadsden Purchase, is also noted. Colton identifies Fillmore City as the capital of the Utah Territory and Santa Fe as the capital of New Mexico.

This map also identifies various forts, rivers, mountain passes, fords, and an assortment of additional topographical details. Map is hand colored in pink, green, yellow and blue pastels to define state and territorial boundaries. The map was issued between 1855 and 1863 in some 12 known states identified by Wesley A. Brown in his short article 'J. H. Colton's Territories of New Mexico and Utah.' The present example corresponds to State 2. Surrounded by Colton's typical spiral motif border. Dated and copyrighted to J. H. Colton, 1855. Published from Colton's 172 William Street Office in New York City. Issued as page no. 51 in volume 1 of Colton's 1856 Atlas of the World.