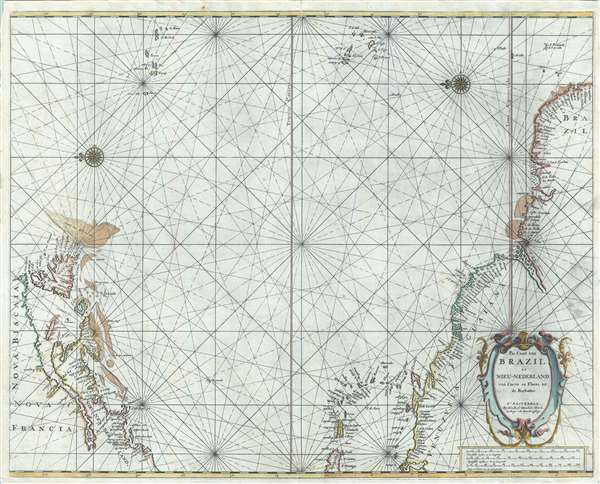 A fascinating and extremely rare 1668 nautical chart or maritime map depicting the northern Atlantic Ocean by Hendrick Doncker. Oriented with the East, this map covers from Newfoundland south to modern day Paraiba, Brazil; east as far as the Azores and Cape Verde Islands; and west as far as Hispaniola. Doncker derived this map from similar map issued in 1650 by Theunis Jacobsz.

Although the usual projection, blank at the center with the eastern parts of North American and Brazil defined by the distant Azores and Cape Verde Islands, might seem bizarre to the modern eye, this was in fact a well-considered. Jacobsz drew this based upon Blaeu's monumental 1630 West Indische Paskaert. His intention was to present the most important information on Blaeu's great map in easily accessible form. This this map focuses on those areas most interesting to the 17th century Dutchman, the Dutch VOC colonies in Nieu-Nederland (New Amsterdam / New York City) and in Brazil (where the VOC was faring poorly in a war with Portugal over domination of the valuable sugar trade). The Canary Islands and the Azores have no doubt been included as the map's eastern most coverage because they are the traditional gateways to Europe. The Spanish controlled territories to the west, in Mexico, the Caribbean, and the Gulf of Mexico, were of little comparative interest.

While Doncker draws on Jacobsz for this map's basic form, it is by no means a slavish copy. The map has been updated throughout with more advanced toponymy (for example 'Gebroken Lant' is introduced for Long Island) and an updated presentation of the inland waterways, particularly the St. Lawrence and Amazon Rivers. Shading has also been added to illustrate offshore shoals and reefs. In New York and New England, New Amsterdam is named and the Hudson River appears as Maritius River. Sandy Hook, Cape May (Delaware Bay Entrance), and Cape Cod are easily recognizable.

According to Burden, Doncker first issued this map in 1659 with a different cartouche. A second edition was issued in 1672, and a third in 1676. Following Burden's cartobibliography, this would suggest that the present map is the second, 1672 state. However, we happen to know that this particular example came from an unrecorded 1668 French edition of Doncker's Monde Aquatique not traced in Koeman. While it is not impossible that this map may have been tipped into the atlas later, we find it more likely that either Burden's dating of this state of the map requires revision or that this map be a heretofore unknown state. The extreme rarity of all editions of this map in both institutional and private collections make it very difficult to compare states side by side to determine if this is just an early appearance of Burden state 2, or a fully unrecorded state.

Hendrick Doncker (1626 - 1699) (a.k.a. Henri Donker) was a Dutch bookseller and publisher of sea charts and nautical atlases active in Amsterdam during the middle part of the 17th century. He maintained a presence on Nieuwe Brugsteeg, Amsterdam. He married Elizabeth Abrahamsd Rensing in 1647. Doncker was somewhat unique to this period in that he did not copy the work of earlier cartographers, instead producing his own map. Moreover, Doncker's charts were widely admired for their constant revision and overall accuracy. In addition to producing his own charts, he also collaborated with Pieter Goos and Anthonie Jacobsz to producing the pilot guide De Zeespiegel. Following his 1699 death, Doncker's remaining stock and valuable map plates were acquired by Johannes van Keulen. He was survived by a daughter, Anna Doncker. Learn More...