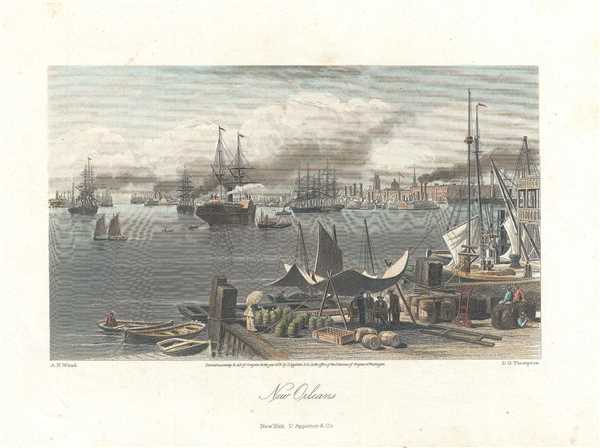 This is a beautiful view of New Orleans as seen from its southern dock section issued by Appleton in 1873. It features a view of the harbor filled with several ships, boats and ferries. In the foreground, we see the dock with boats anchored, merchants engaged in trade and men resting among various goods. The view was drawn by A. R. Waud and engraved by D. G. Thompson and ‘Entered according to Act of Congress in the year 1873 by D. Appleton and Co. in the Office of the Librarian of Congress of Washington’.

D. Appleton (fl. 1830 - 1873) was a New York based map publisher operating in the middle part of the 19th century. His most common publications were school geography texts published under his own name or the name of his associate S. S. Cornell. He also published a series of pocket maps relating to the Civil War and a few lesser known wall maps.

Very good. Minor spotting in margins.
Looking for a high-resolution scan of this?