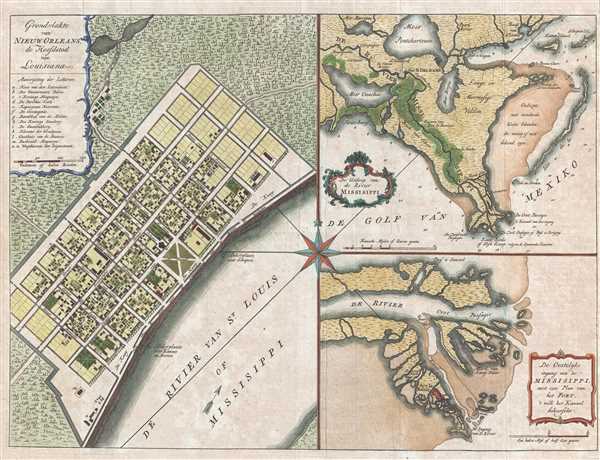 A fine example of one of the more beautiful 18th century maps of New Orleans and the Mississippi River Delta. This map, issued in 1769 by Isaak Tirion, is essentially three related maps on a single sheet. The primary map, occupying the left quadrants, is a detail of New Orleans. The map depicts the well-planned city center, the modern-day French Quarter, situated along the Mississippi River. The city's bounding canals and grid structure are evident and many of the city's most important buildings are easily recognizable. Others are identified via an alphanumeric key in the upper left corner. This plan is based upon the Thomas Jeffrey's Plan of 1759, which is based upon Jacques Nicholas Bellin's map of 1744, which in turn is based upon the Jean Leblond de La Tour plan of 1720, issued just two years after the city's founding in 1718.

The secondary maps, focusing on the course of the Mississippi River from Lake Pontchartrain south, and on the delta itself, occupy the right hand quadrants. These maps contain both land and nautical details, including soundings. The map on the lower right, focusing on the river delta, names Fort Balize. Founded in 1699, Balize was the oldest French settlement in Louisiana.

This map appeared in several simultaneously published works issued around 1769.