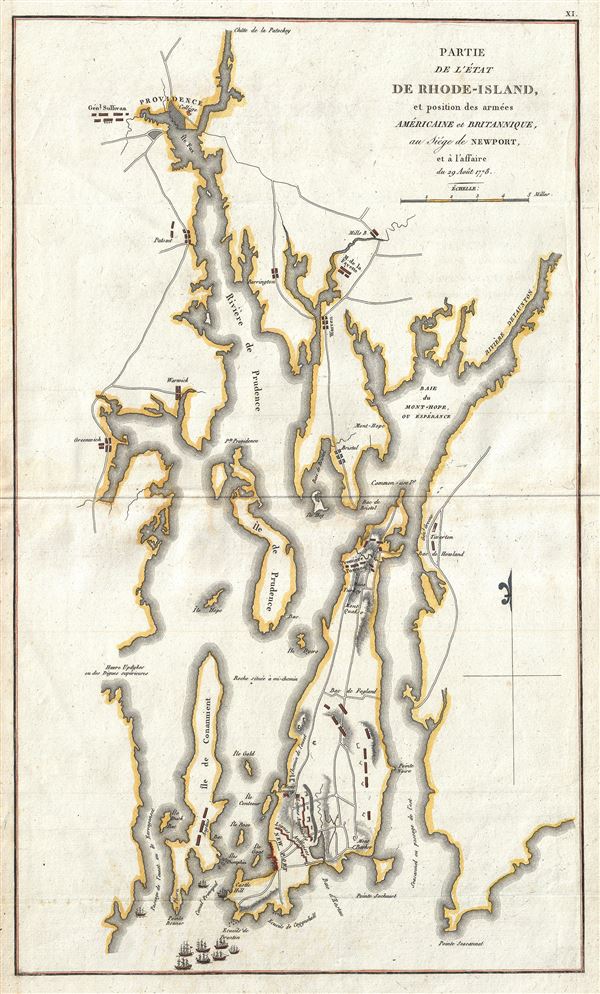 This is a rare map of Narragansett Bay, Rhode Island during the American Revolutionary War issued for the 1807 French edition of John Marshall's The Life of Washington. The map covers the strategically important Narragansett Bay from Newport to Providence. Various estuaries, roads, and topographical elements are noted. The map indicates the positions of the British and Continental forces as each attempted to maintain control of the Bay.

Marshall prepared this map to illustrate the various battles for control of Newport and Narragansett Bay during the American Revolutionary War. Early in the War the city of Newport, Rhode Island and thus access to Narragansett Bay was seized by the British Major General Robert Pigot. This map illustrates attempts by the Continental forces under Major Generals Nathanael Green and Lafayette to control of the Bay. The Battle of Rhode Island (Aquidneck Island), as the siege is now known, was ultimately indecisive, with both sides claiming victory. Ultimately strategic control of the region fell to the British, who forced Continental forces to withdraw to Bristol and Tiverton while maintaining control of Aquidneck Island, Newport, and Narragansett Bay.

This map appeared in French version of John Marshall's seminal work, The Life of Washington. Marshall composed the five volume biography between 1805 and 1807 and based the work on original papers and records provided by the president's own family. This map was engraved by Jean-Nicholas Buache de Neuville and appears in the 1807 French edition of Marshall's Vie De George Washington.