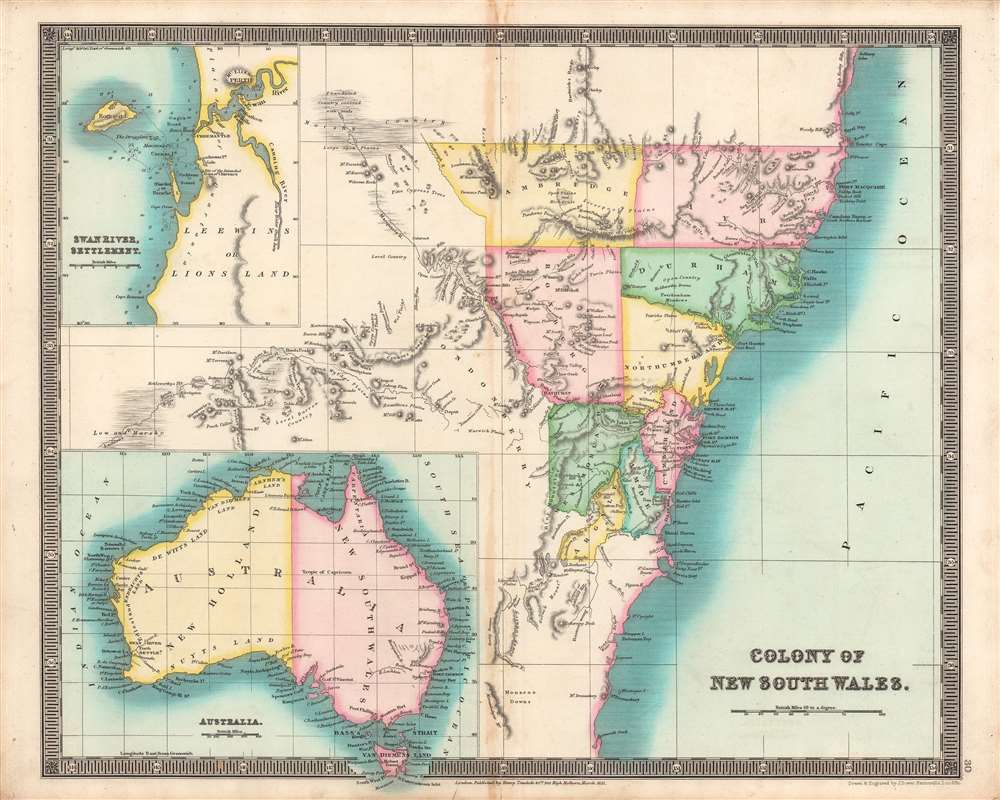 The early days of British Australia.

This is the Teesdale / John Dower's brilliantly colored 1831 map of Australia, with a focus on the Colony of New South Wales. It illustrates the territory as it was rapidly developing and transitioning from a penal colony to a society of free settlers.

At the time this map was made, the British population was small and mostly confined to a handful of coastal towns, but was growing quickly. Several expeditions in the early 19th century mapped out routes through the Blue Mountains, but, as can be seen here, much of Australia remained terra incognita. In the 1820s, significant settlements sprang up west of Sydney at Bathurst and Wellington (the latter noted simply as 'Depot'). Colonies were also established in western Australia (Swan River, later Perth, in an inset at top-left) and soon afterwards in southern Australia (based at Adelaide, near Kangaroo Island and Cape Jervis, marked in the inset of the entire continent at bottom-left), joining the existing colony at Van Diemen's Land (Tasmania).

Overall, this map captures Australia as it quickly transitioned from a land inhabited by Aboriginal peoples to a penal colony ruled by a military governor, and again to a settlement with laws, representative government, and civil society organizations.

This map was engraved by John Dower for the 1831 edition of A New General Atlas of the World, published by Henry Teesdale. This appears to be an especially rare presentation of Dower's Australia map, not matching any of the examples in the David Rumsey Historical Map Collection or other major digital repositories. Although undated, it almost certainly is an example from 1831, as the Swan River Settlement was established in 1829 and then incorporated into the new Colony of Western Australia in 1832. Since the latter term is not present here, the map likely was published between these two dates. Also, it does not include the Colony of South Australia, split off from New South Wales in 1836. The map is only cataloged in the holdings of four institutions in Australia and the United Kingdom, though as stated above the present map is likely to be distinct from those examples in coloration and presentation.