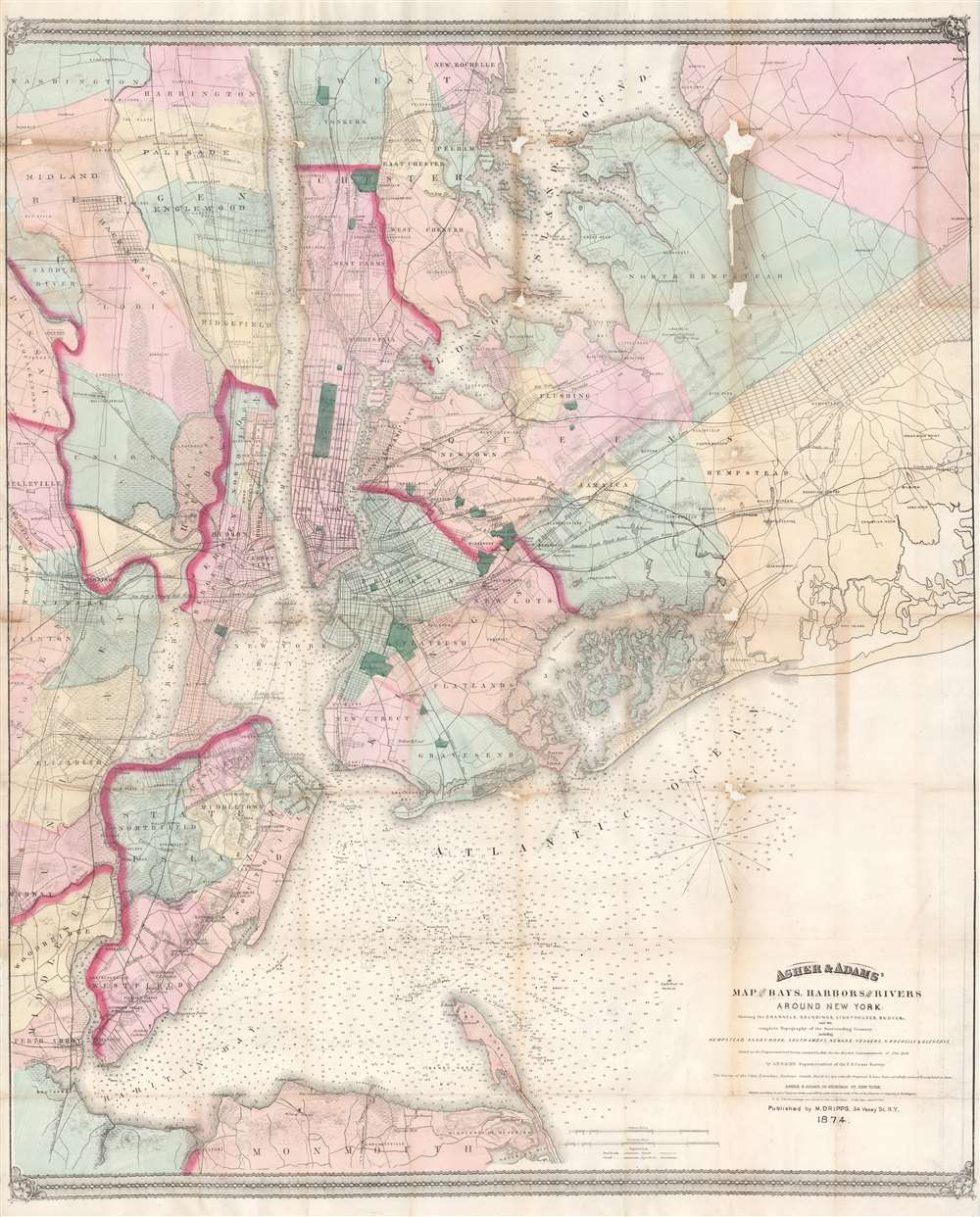 A visually stunning and extremely rare 1874 pocket map of the greater New York City area innovatively combining detailed land surveys with the work of the U.S. Coast Survey. Covers the New York City area from Sandy Hook and Monmouth County north to include Staten Island, Newark, Manhattan and Yonkers. Extends eastward into Long Island as far as Hicksville, Jericho and Freeport. Includes all of Brooklyn, Jamaica Bay, Queens, parts of Westchester, and much of northeastern New Jersey. Offers a detailed view of the streets, roadways, railroads, farmlands, islands, swamps, and parks of the region. Includes the Croton Aqueduct. Nautically, this map is heavily based upon the 1856 U.S. Coast survey of the same region compiled under the direction of A. D. Bache. Offers thousands of depth soundings, noting channels, buoys and lighthouses where appropriate. Published by Matthew Dripps working in conjunction with the Asher and Adams firm.

Matthew Dripps (1812 – April 9, 1896) was an Irish-born American mapmaker active in Philadelphia and New York during the second half of the 19th century. Dripps was born in Gracefield, Ireland. In Ireland, probably Belfast, he worked as a grocer. Dripps immigrated to American from Belfast on the Patrick Henry in 1849, arriving in Philadelphia, where he connected with the Reformed Presbyterian Church and worked briefly as a tax collector. His earliest recorded maps, depicting Philadelphia, appeared during this period. Dripps relocated to Brooklyn, New York in 1850, setting up shop as a map publisher. His two largest maps were published in the following years, 1850 and 1851, and combine to form an enormous map of Manhattan. These gained him the attention of the City Council, who used his maps for census and government work. Afterwards, he issued other large format New York City and Brooklyn maps as well as smaller maps for the New York City Clerk's office. He was married to Ameila Millar Dripps with whom he had six children, among them Amelia Dripps and the clergyman Joseph Frederick. Dripps is interred at Greewood Cemetery, Brooklyn.


Asher and Adams (fl. c. 1860 - c. 1900) were New York based cartographers active in the latter part of the 19th century. Active in the 1860s and 70s, the New York firm of Asher & Adams produced some of the most detailed and colorful late 19th century American Atlases. Asher & Adams are known for their remarkable state and county atlases which are so detailed that they include individual family homes and names. The Asher & Adams firm followed the quality and style formats pioneered by the earlier Colton and Johnson firms - notable for their distinctive pastel color washes and impressive size. Their most important work is their 1874 Asher & Adams Commercial and Statistical Gazetteer of the United States which is one of the first 19th century atlases to remove topographical information to make room for detailed depictions of railroads.

Very good. Has undergone some professional restoration work and has been backed with Japanese paper. However, has also been refolded at some point. Some minor damage and loss along a couple of the original fold lines - especially in the upper right quadrant. Would flatten beautifully. Comes with original linen binder.