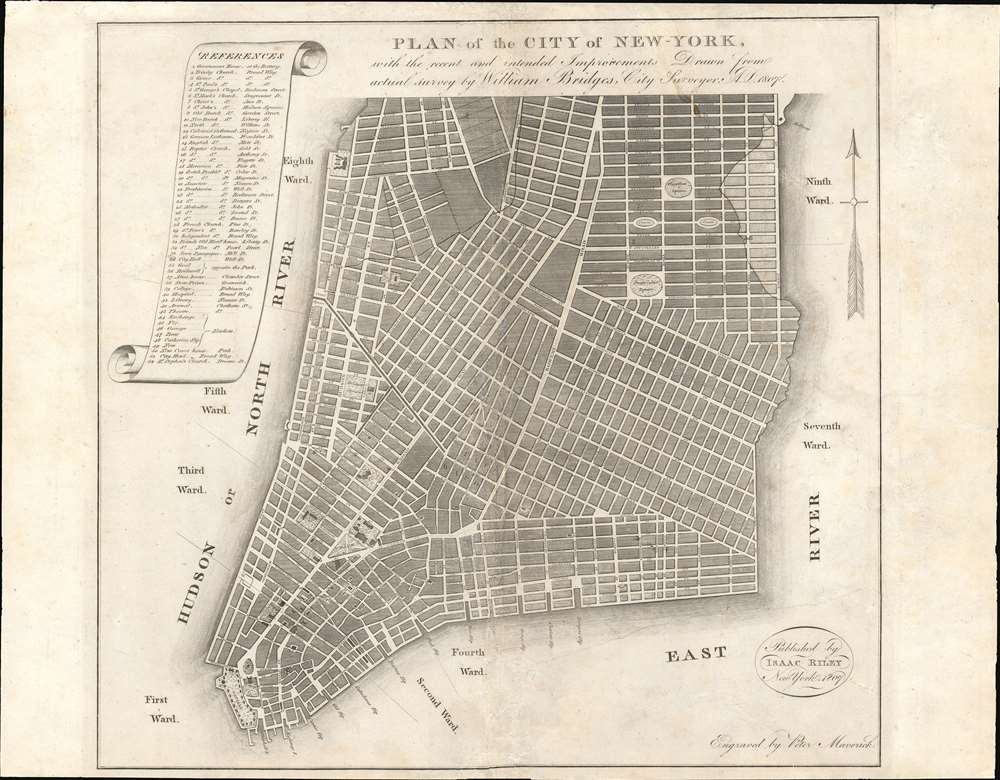 Known as the Bridges Plan or the Peter Maverick Map of New York, this is an interesting and unusual discovery. William Bridges' 1807 separately issued a revival of the failed 1801 Mangin-Goerck Plan. It was most likely Bridges' reworking of this plan that inspired him to call for a dramatic landfill expansion of lower Manhattan not dissimilar from what is presented here. Those who know New York's shoreline will pause at the perfect blocks and ridged angles of this plan not significantly more accurate today than it was in 1801 when Mangin first presented it. Mangin, a talented French architect, and Goerck, an established New York Surveyor, were commissioned by the Common Council of New York to prepare a new regulatory map of the city. Although Goerck passed away before the plan could be completed, Mangin finished the plan on a grand scale, re-envisioning New York City in his own image. Mangin even added streets such as Mangin Street and Goerck Street which would have been submerged under the East River had they actually existed (as a side note another of Mangin's Street's, South Street, did eventually appear). The Mangin-Goerck plan went far beyond the Common Council's dreams of an administrative plan due to its inclusion of 'intended improvements,' new streets, and idealized block structure. That plan was, as described by Mangin 'not the plan of the city such as it is, but such as it is to be.' Nonetheless, despite, or more correctly because, of its visionary nature, the Mangin-Goerck plan was derided and suppressed by the City Council, thus enjoying a short lifespan.
It is curious then that in 1807 William Bridges, the talented City Surveyor who later, in 1811, laid New York's famous grid structure, resurrected and pirated the Mangin-Goerck Plan, attaching his own name to it. It was a private venture that led Bridges to this piracy. He was commissioned by Dr. Samuel Mitchell to provide a map to serve as the <i>frontis</i> for Mitchell's Picture of New York, a travel guide intended for foreign tourist. Perhaps Bridges chose the Mangin-Geerck plan simply because, as a failed city plan, there were few obstacles to its use, but we do pity the hapless tourists who leapt into the East River in pursuit of Mangin Street.
Bridges went on to complete the famous Commissioner's Plan in 1811 – the document that definitively established New York City's iconic street grid. That plan did in fact extend the street-grid into the East River much Mangin and Goerck predicted. The Mangin-Goerck Plan, though derided in its day, was thus remarkably prescient. We cannot help but imagine that when Bridges sat down to work on the Commissioner's Plan, he remembered his 1807 revisiting of the Mangin-Goerck plan and took no small inspiration.
Mangin and Goerck’s ill-fated map was suppressed by the City Council, and it has been estimated that only perhaps ten examples survive. Although much smaller, this well engraved variant by is the only realistic means for a collector to obtain a version of this inspiringly prescient map. This map as engraved by Peter Maverick and published by Isaac Riley.

William Bridges (fl. c. 1800 - 1820) was a surveyor and cartographer active in New York City early in the 19th century. Bridges is best known for his publication of New York City's grid structure in his important 1811 Commissioner's Plan of New York. The Commissioner's Plan is considered to be "the single most important document in New York City's development (Augustyn & Cohen). Unfortunately Bridges had little to do with the actual construction of the Commissioner's plan having stolen credit for the work from the actual surveyor, John Randel. Though today Randel is credited for the Commissioner's Plan, it was Bridges who profited on the original issue and successfully held the copyright. In 1807, Bridges also pirated the Mangin-Goerck Plan of New York City, attaching his own name to it as the "Bridges Plan", and publishing it in a Tourist Guide. Perhaps if Bridges had spent more time surveying than absconding with the work of others, he would have realized that the Mangin-Goerck Plan represented a speculative New York City of the future. It had streets that did not exists and a fanciful block structure that no doubt confounded any tourist's foolish enough to buy it.


Peter Maverick (October 22, 1780 – June 7, 1831) was a New York City engraver active in the early part of the 19th century. Peter Maverick is best known engraving several seminal maps of New York City, including the Mangin-Goerck plan of 1803, the Bridges Plan of 1807, and Commissioner's Plan of 1811. Maverick mastered engraving under the tutelage of his father, Peter Rushton Maverick (1755 – 1811), a well known New York engraver in his own right. He was active as an engraver from roughly 1802, when he married Mary Griffin and graduated from his apprenticeship, to 1817. Maverick took his own apprentice, Asher Brown Durand, from 1812 – 1817. Once Durand graduated form his apprenticeship, five years later, he and Maverick established a partnership which lasted until about 1820. Maverick's first shop was located at 68 Beekman Street, New York. He later recoated to Frankfort Street and then to successive locations on Nassau Street. Peter Maverick died of a heart attack on June 7th of 1831.


Joseph-Francois Mangin (fl. c. 1750 - 1812) was an architect, city surveyor, and civil engineer active in New York during the late 18th and early 19th century. Mangin was born and educated in France where he apprenticed under Ange-Jacques Gabriel in the design of the Place de la Concorde, Paris. He moved to New York city in 1786 and was admitted as a Freeman of New York on May 9, 1796. He submitted several projects to the Common Council of New York, including a recommendation to drain the Collect Pond and various improvements to the port facilities. In 1799 he was commissioned to make a large scale plan of New York City. He presented the plan to the Common Council in 1801. The council was appalled by the plan, which reimagined New York City in an idealized from complete with non-existent streets and other improvements that never came to pass. Mangin even added streets such as Mangin Street and Goerck Street which would have been submerged under the East River had they actually existed. Mangin Street did eventually appear and still partially exists under the Williamsburg Bridge between Baruch Place and East Houston. South Street, another of Mangin's inventions, is far better known. Mangin designed this map in partnership with Casimir Goerck, a well-known New York Surveyor active in the late 18th century. Goreck died before the plan could be presented to the council and, to us it is highly doubtfully that he would have allowed such an inaccurate production to bear his distinguished name - setting the responsibility for the failed Mangin-Goerck plan, as it came to be known, squarely on Mangin's shoulders. Mangin also claimed at various point to have designed the New York City Hall while in the employ of the hall's true designer John McComb. McComb unilaterally denied Mangin's claims which are generally regarded as spurious. Despite his failed plan and dubious claims, Mangin was a favorite with the Common Council and was commissioned to work on the 1811 Comissioner's Plan of New York City, a truly meritorious work that laid out the permanent street grid for most of Manhanttan.

Expertly-mended tear extending from left edge to middle of image, repairs and restorations along centerfold, upper and lower margins trimmed inside plate mark. Lined on verso.