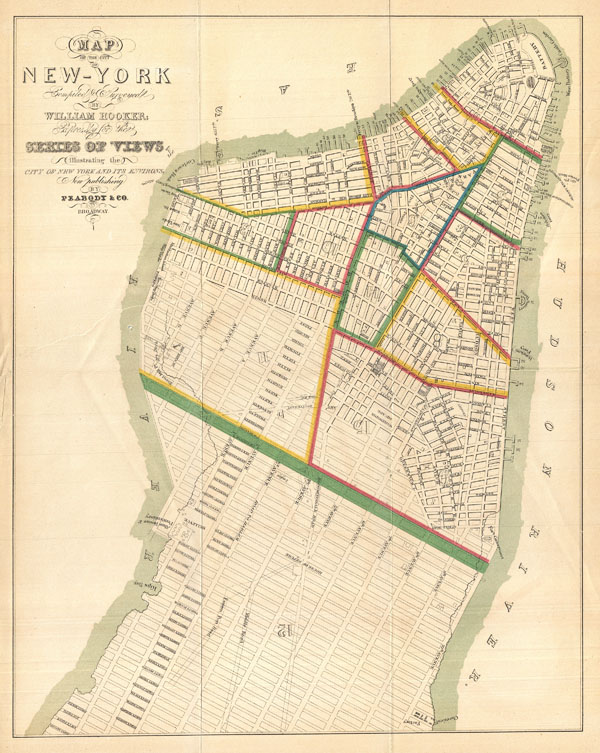 This is an unusual map of New York City first issued in 1831 by William Hooker and Peabody. This example is a reissue, apparently from the same plate, dating to the Hardy edition of the Manual of the Corporation of New York, 1871. Perhaps this map's most striking feature is the fact that the orientation of the map and the orientation of the title are at odds. We have stumbled across this piece a few times from both the first and second issues, and all examples exhibit the same conflicting orientation. Since this map was originally published to supplement a book of pictures and views of New York and vicinity by T.S. Fay, we can speculate that the limited budget of the publisher, Peabody and Company, made a reissue of the map impractical despite the orientation error.

Cartographically this map claims to be the culmination of original survey work accomplished by William Hooker, but to our eye is a clear copy of Burr's contemporaneous pocket map of New York City. Hooker's map, like Burr's names all streets and identifies city wards from the Battery to 52nd Street. Important buildings, docks, topographical features, and parks are noted.

Though originally issued in 1831 for T.S. Fay's Views in the City of New-York and its Environs, this example is a reissue prepared by John Hardy, Clerk of the Common Council, for the 1871 edition of the Manual of the Corporation of New York.

William Hooker (fl. c. 1811 - 1846) was an important American geographer, surveyor, and engraver active in New York during the early part of the 19th century. He is responsible for a number of important maps and geographies particularly focusing on the New York area. As a young man, Hooker may have been apprenticed to Edmund March Blunt, the well established publisher of the New England Coast Pilot. What is certain, is that in 1819, Hooker married Eliza Carleton, Blunt's daughter. He went on to publish a number of nautical charts, school geographies, guide books, and atlases in conjunction with Blunt and others, including Humphrey Phelps, Peabody & Company, and A. W. Wilgus. Hooker passed away in 1846. Learn More...


John Hardy (September 19, 1835 - December 9, 1913) was born in Scotland on September 19, 1835. At four he, along with his parents, immigrated to the United States and settled in New York City. There he attended public schools and in 1853 graduated from the College of the City of New York, where he studied law. In 1861 he was admitted to the New York Bar and in the same year took a seat on the New York State Assembly. He later was elected to the Board of Alderman of New York City and held this post, on and off, from 1863 to 1869. In 1870 and again in 1871 he held the position of Clerk of the Common Council of New York City. In this position, like Valentine and Shannon before him, he published an annual Manual of the Corporation of the City of New York, which detailed the events of the year, Common Council minutes, offered an assortment of maps, and included political and historical notes on the city. Late, in 1877, he became the Chief Clerk to the Mayor and in 1881 was elected on the Democratic ticket to the United States Congress, a position he held until 1885. He died on December 9, 1913 and is interred in Greenwood Cemetery, Brooklyn. Learn More...

Very good. Minor discolorations along original fold lines. Verso repair and reinforcement on a couple of closed tears from margins and on original fold lines - the largest of these, though not disfiguring, extends from left center about 4 inches into the map.