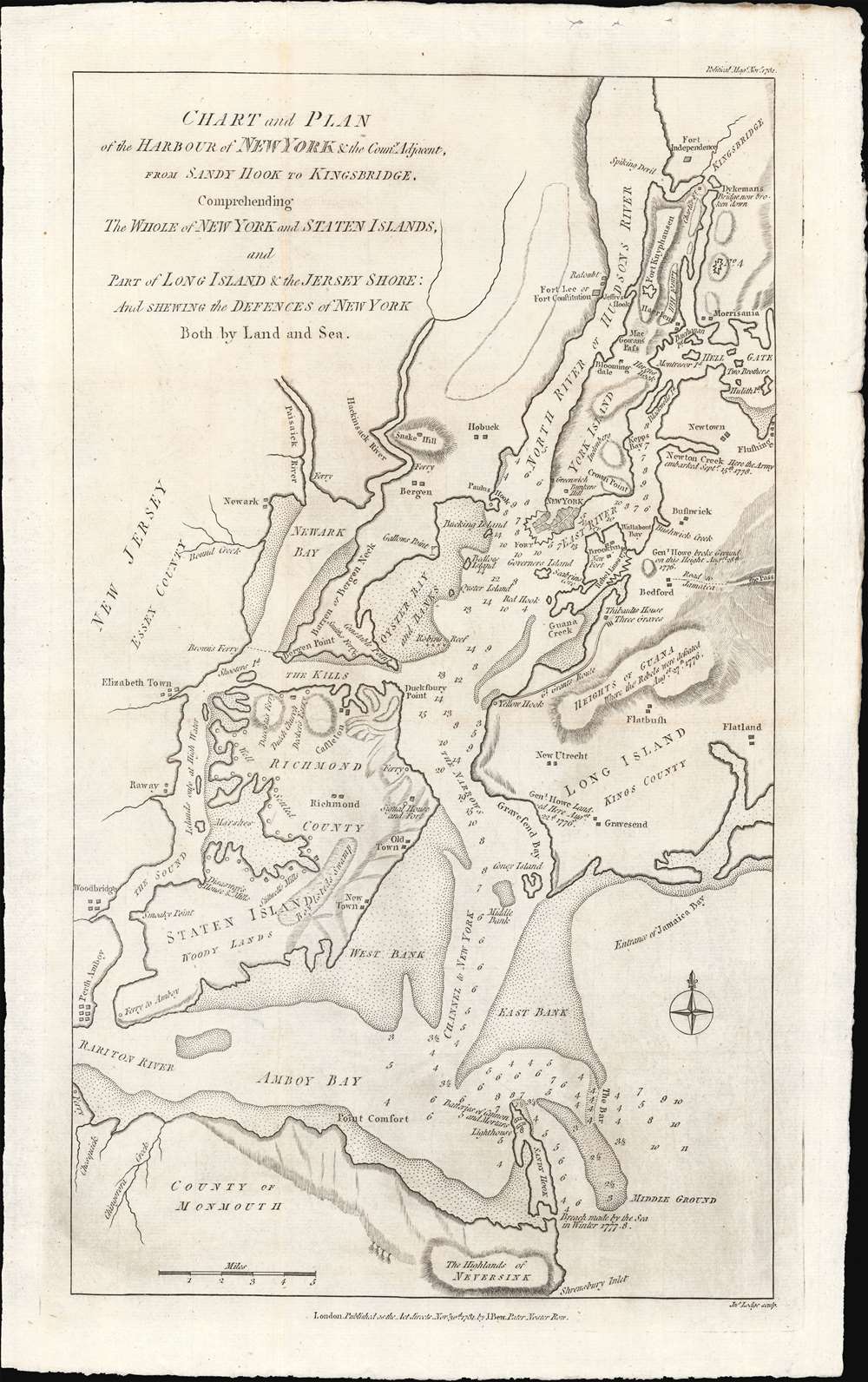 Chart and Plan of the Harbour of New York and the Couny Adjacent, from Sandy Hook to Kingsbridge, Comprehending The Whole ofNew York and Staten Islands, and Part of Long Isladn adn the Jersey Shore: And Shewing the Defences of New York Both by Land and Sea.
1781 (dated)     16.5 x 10 in (41.91 x 25.4 cm)

An important 1781 map of New York City near the end of the American Revolutionary War. This map was prepared by John Bew and engraved in London by John Lodge. Coverage extends from Sandy Hook to Fort Independence in the Bronx, and from Perth Amboy to western Long Island. When this map was issued, in November of 1781, news of the British defeat at the October 19, 1781 Battle of Yorktown, and the subsequent surrender of General Cornwallis, had already reached London. With its large, defensible harbor, multiple forts, and large defending force, it appeared that New York might soon be the last redoubt of British power in the rebelling colonies. This map reflects New York's defensive ability, citing the locations of new forts under construction, as well as existing forts repurposed for British defense, such as Fort Washington / Knyphausen.

In Bew's article about the war, he describes the surrender of Cornwallis as 'fatal news' and comments that New York 'may now be termed our last stake in America: for we may give up all thoughts of keeping both the Carolinas and Georgia.' His British hubris shines through for being appalled at the humiliation of British forces by an 'inferior army'.

This map was published on November 30, 1781, by John Bew in The Political Magazine and Parliamentary, Naval, Military and Literary Journal to illustrate an article entitled Chart and Plan of N. York, with its Defences by Land and Water. It was engraved in London by John Lodge.

John Lodge (1735-1796) was a British engraver, map seller, draughtsman and stationer active in London from roughly 1755 to the late 18th century. Lodge, born in London, was apprenticed to Thomas Jefferys, one of the most prominent and prolific map publishers and engravers of his day. He produced several maps for The Gentleman's Magazine and The Political Magazine and other publications. He also engraved book-illustrations, portraits and botanical plates and taught etching and engraving. Around the 1780's, he is believed to have lived to Dublin, where he did a significant amount of engraving work for Dublin booksellers. Lodge was survived by his wife Ann, to whom he left his entire estate, and his son John Lodge, who was also an engraver. Learn More...


John Bew (1743 - April 12, 1793) was a bookseller, stationer, printer, and publisher active in London in the second half of the 18th century. Bew's offices were at 28-29 Paternoster Row, London. He published The Political Magazine and Parliamentary, Naval, Military and Literary Journal, a journal for the educated Tory elite, from 1780 to March 1785 - afterwards it was sold to John Murray (1745 - 1793). The richly illustrated journal often included supplementary maps engraved by John Lodge. Bew filed for bankruptcy on November 17, 1790. He died shortly thereafter in 1793. After his death, his son, John Bew II (1768 - ????), took over what remained of the business, partnered with Stack as 'Bew and Stack'. Learn More...

Bew, J., 'Chart and Plan of N. York, with its Defences by Land and Water', The Political Magazine and Parliamentary, Naval, Military and Literary Journal, Issue November 30, 1781.