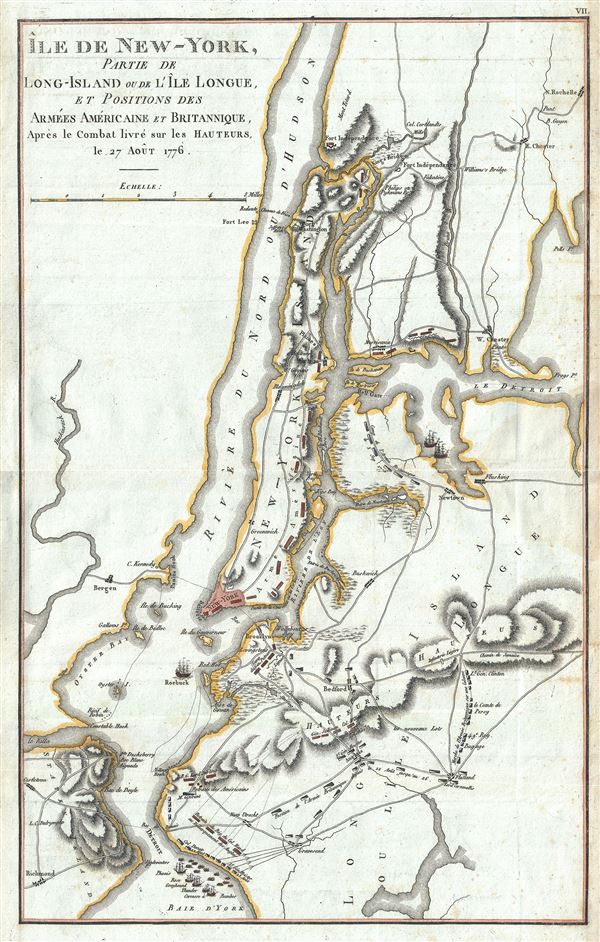 This is a rare map of New York City during the American Revolutionary issued for the 1807 French edition of John Marshall's The Life of Washington. The map covers the strategically important Manhattan Island and vicinity, including Staten Island, Brooklyn, Queens, and the Bronx. Various rivers, roads, and topographical elements are noted. The map also indicates the positions of the British and Continental forces as each attempted to maintain control of the region.

Marshall prepared this map to illustrate the events leading to the British takeover of New York City and vicinity. Specifically, it details the Battle of Harlem Heights and the Battle of Long Island. In 1776 the British General William Howe, fleeing Boston, regrouped and landed his forces on Long Island and Staten Island. After defeating George Washington at the Battle of Long Island, Howe sized control of New York City and most of Manhattan. A series of subsequent skirmishes culminated in the Battle of Harlem Heights, in what is now Morningside Heights, New York City. Washington controlled the highlands and galvanized his troops to a strong defense, holding the heights against superior British numbers and firepower. Nonetheless, the position proved untenable and Washington and his forces retreated northward to Westchester County. Howe, keen to size the advantage, landed troops in Westchester, a flanking maneuver intending to encircle Washington's forces. Washington, alerted to the tactic entrenched himself in White Plains, but was unable to hold against Howe. Howe proceeded to drive Washington across New Jersey into Pennsylvania where he famously crossed the Delaware on December 26th to surprise a Brigade of Hessian mercenaries in the Battle of Trenton – a strategic Continental victory and major turning point in the war.

This map appeared in French version of John Marshall's seminal work, The Life of Washington. Marshall composed the five volume biography between 1805 and 1807 and based the work on original papers and records provided by the president's own family. This map was engraved by Jean-Nicholas Buache de Neuville and appears in the 1807 French edition of Marshall's Vie De George Washington.