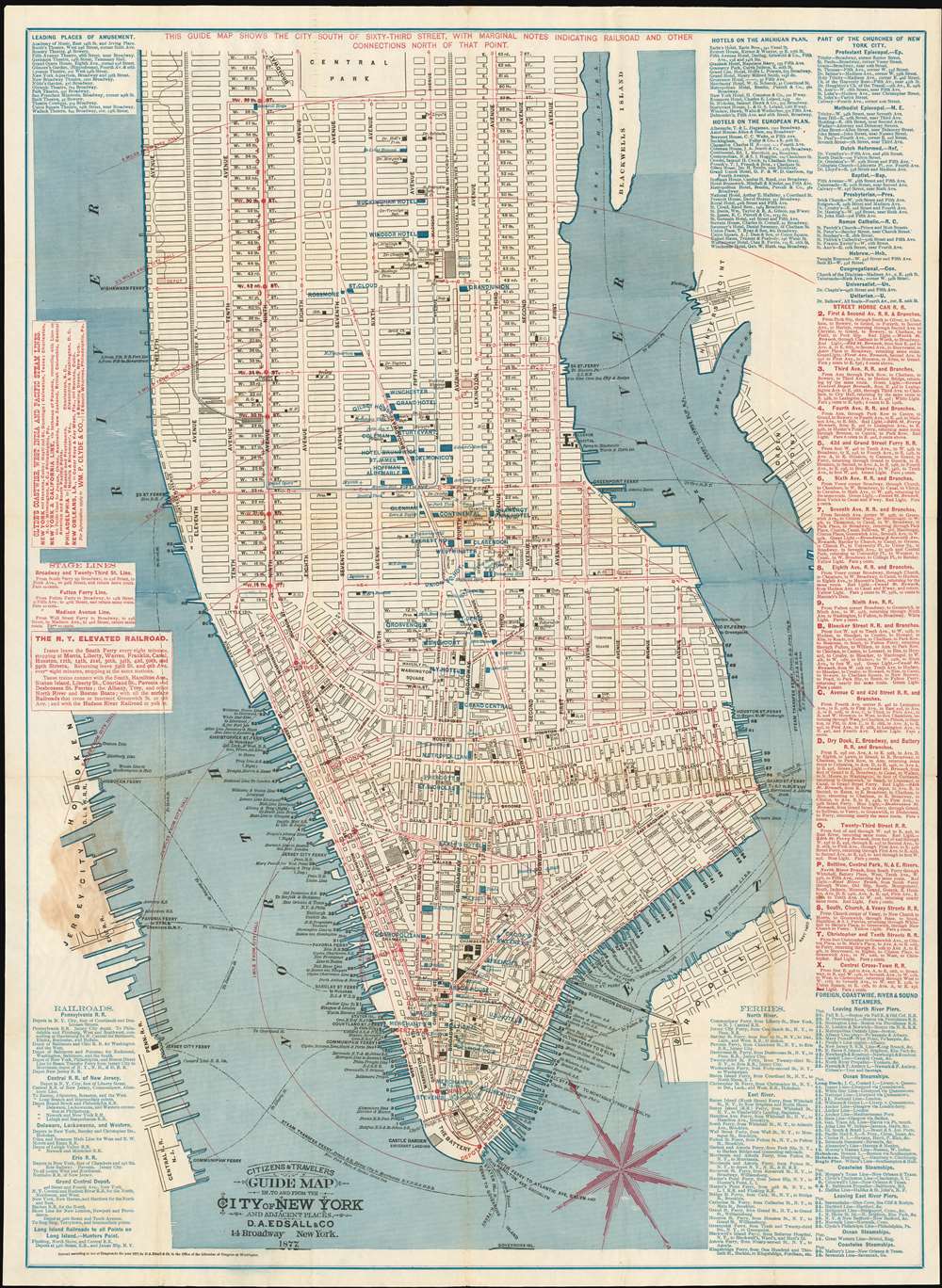 This is the sole 1877 edition of this Edsall and Company map of New York City drawn to promote the Adams Express Company, a 19th-century freight and cargo transport business which remains as one of the oldest companies still listed on the New York Stock Exchange. The map depicts Manhattan from 63rd Street to The Battery and from the Hudson (North) River to Hunter's Point, Green Point, and Brooklyn. The map's role in promoting a shipping company is reflected in the map's meticulous depiction of the city's growing transit system, providing the reader a visceral sense of the burgeoning, busy city as it developed. The Elevated Railroad, which ran every eight minutes from South Ferry along Ninth Avenue to 59th Street is shown, along with sixteen different lines of the Street Horse Car Railroad. As the name suggests, the Street Horse Car Railroad consisted of carts running on rails pulled by horses. Several different companies operated on certain lines, and these cars were a much more pleasant form of transport and sheltered customers from the elements. Each of these lines, the Elevated Railroad and the Street Horse Cart Railroads, are illustrated by red lines snaking their way through the streets. The Hudson River Railroad, which left Pennsylvania Station and ran along Eleventh Avenue, is illustrated by black railroad tracks, as are the New York, New Haven and Hartford Railroad and the New York Central and Hudson Railroad, which left from Grand Central.

Numerous locations throughout Manhattan are labeled, including City Hall, County Court, Trinity Church, and Bellevue Hospital. Other locations are labeled by blue overprinting, including Tiffany and Company's location at Union Square, several different Delmonico's Restaurant locations, and numerous hotels. The Brooklyn Bridge, which was in the process of being built, is illustrated across the East River and labeled simply 'Suspension Bridge'. Information provided along the left and right borders includes the operating schedule and fare rates for the New York Elevated Railroad, departure points for five different railway companies that take travelers out of the city, information concerning ferries across the North and East Rivers and international steamship departure piers. Routes of the Street Horse Car Railroad are also provided, along with information about hotels, both on the American and European plan.

The text on the verso states that this map was 'Presented by Adams Express Company,' a freight and cargo transport business. The Adams Express Company was originally founded in 1839 by Alvin Adams as 'Adams and Company', a produce merchant ruined by the Panic of 1837. He began carrying letters, small packages, and other valuables for customers between Boston and Worcester, Massachusetts, but soon expanded to New York City, Philadelphia, and beyond. By 1847 he had extended the reach of his business far into the South, and by 1850 was shipping items by rail and stagecoach to St. Louis. In 1855, the company reorganized under the name Adams Express Company. By 1910, the company's stock holdings were enormous, including being the second largest stockholder in the Pennsylvania Railroad and the third largest in the New York, New Haven, and Hartford Railroad. Eventually, Adams Express moved away from its shipping interests and focused solely on being and investment trust. As of 2015, it had paid a dividend every year for 80 years (since 1935). The company also changed its name in 2015 to Adams Diversified Equity Fund, recognizing that its activities as an express shipping operation were long ended.

This map was published by D. A. Edsall and Company of 114 Broadway in New York City in 1877, in a single edition. There are examples in fifteen institutional collections listed in OCLC.

David A. Edsall (fl. c. 1877 - c. 1878) was a New York City based inventor, publisher, printer, and lithographer active in the late 19th century. Edsall issued commercial maps of New York City and Chicago. He filed a patent in 1875 for a rack-pad stamp-inking apparatus. He maintained offices at 14 Broadway and later 233 Broadway. In 1879 Edsall's plates were taken over by S. D. L. Taunton who continued to republish them under his own imprint. D. A. Edsall may have been born in Elmira, New York, and during the American Civil War, served as a member of the Union Regiment. If so he saw action at Bull's Run. Learn More...