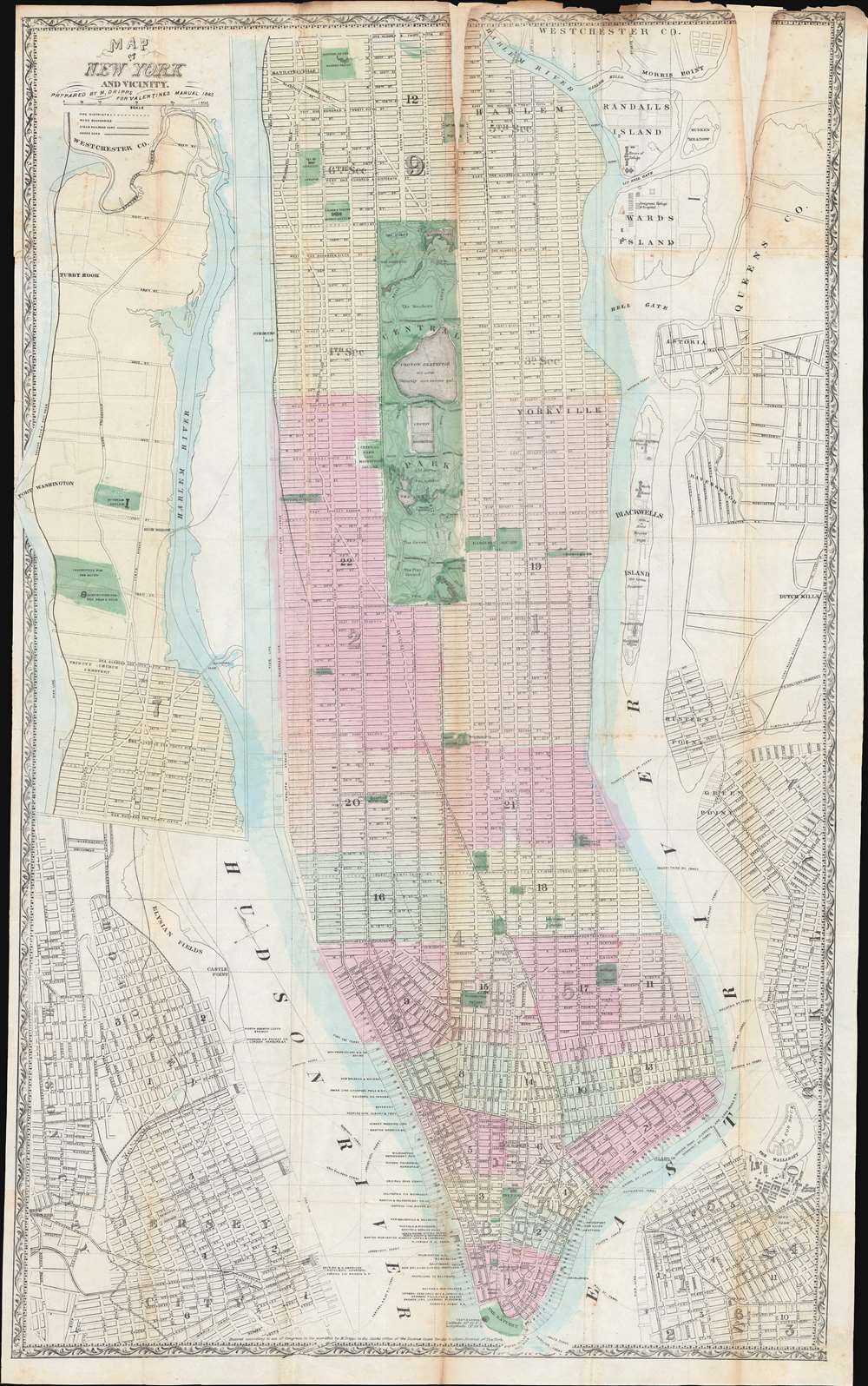 This is a scarce large format 1865 map or plan of New York City by Matthew Dripps. It depicts the island of Manhattan as well as parts of Brooklyn, Queens, Hoboken, and Jersey City. The map illustrates the city in considerable detail with all streets and, in Manhattan, block numbers clearly identified. An inset along the left border details the northern portion of Manhattan. The map labels most of the piers in lower Manhattan and shows numerous individual buildings with identifying numbers. Where Columbia University now stands, this map reveals a 19th century Lunatic Asylum. In Queens, Dripps labels Hunters Point and shows the beginnings of the Long Island Railroad. Astoria is delineated. Central Park is mapped in detail exhibiting the fully glory of Olmsted's plan.

The mid-19th century was a dynamic period in the urban development of New York City. Under the governance of Tammany Hall and the corrupt 'Boss' Tweed, New York City had become a mélange of extremes. By 1864 the Five Points had devolved into the world's most notoriously dangerous slum, while further north the high ideals and design genius of Frederick Law Olmsted and Calvert Vaux created Central Park, the world's first and possibly finest planned public recreation area. Meanwhile, across the East River, Brooklyn, Greenpoint, and Williamsburg consolidated into a single city, becoming the third largest city in the United States, and setting the stage for the emergence of the modern New York City.

Dated 1865 under the title, the copyright at the bottom left reads 'Entered according to Act of Congress in the year 1865 by M. Dripps in the Clerk's Office of the District Court for the Southern District of New York'. It was prepared by Matthew Dripps for issue in David Valentine's 1865 Manual of the Common Council of New York.

Valentine, D., Valentine's Manual of the Corporation of the City of New York, 1865.

Haskell, D., Manhattan Maps: A Co-operative List, #1154.
Looking for a high-resolution scan of this?