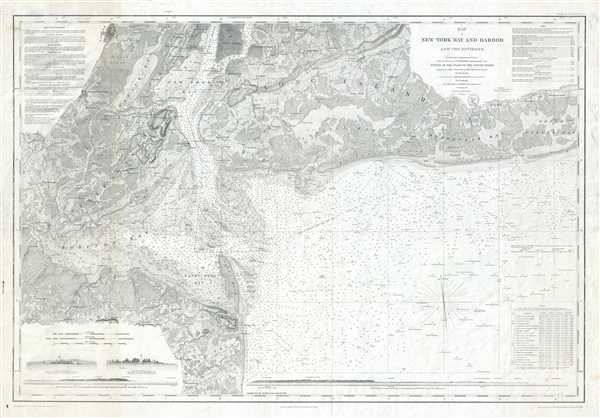 In the 1920s or 1930s, when the U.S. Coast Survey decided to destroy all of their original copper printing plates, the decision was made to print a 'last run' from each of these plates. The imprints differed greatly from other versions of Coast Survey maps. The first issues of the coast survey charts were printed using the electrotype process, but as this map was printed using the original metal plates, the imprint is much cleaner, making this final run off the plates exceptionally decorative and desirable.

Highly detailed and meticulously engraved, myriad depth soundings fill New York Bay, Raritan Bay, and the New York/New Jersey Bight. Numerous sailing hazards are also included throughout, all of which are labeled, along with the channels. New York City is illustrated up to 28th Street, including Washington Square Park, Union Square Park, and Madison Square Park. Both Williamsburg and Brooklyn are illustrated and labeled on Long Island. Red Hook, Gowanus, Owl's Head, New Utrecht, Fort, Hamilton, Gravesend, Flatlands, Flatbush, Bushwick, and Jamaica are also labeled. Individual homesteads are illustrated along the roads throughout Long Island, with larger concentrations in the aforementioned communities. Coney Island and Rockaway Beach are illustrated along the southern coast of Long Island. In New Jersey, Hoboken, Jersey City, and Newark are among the locations labeled, along with the New Jersey Rail Road.

Situated along the bottom border, several views allow the mariner to have a better understanding of what they would see when traveling this stretch of the coast. These views include several views of the Sandy Hook Lighthouse from different directions, and a view of the opening of the Old North Channel. A table containing information concerning the direction and force of currents throughout New York Bay and Harbor is included on the lower right. Sailing directions for the region are included in the upper left corner, while other notes pertaining to the chart's use are included in the upper right corner.

This restrike was produced in the 1920s from the original first edition 1845 metal plate of the United States Coast Survey nautical chart of New York Bay and Harbor. The chart was produced under the direction of F. R. Hassler, the Superintendent of the Survey of the Coast of the United States, with triangulation, topography, and hydrography work completed by several teams of workers and their assistants.