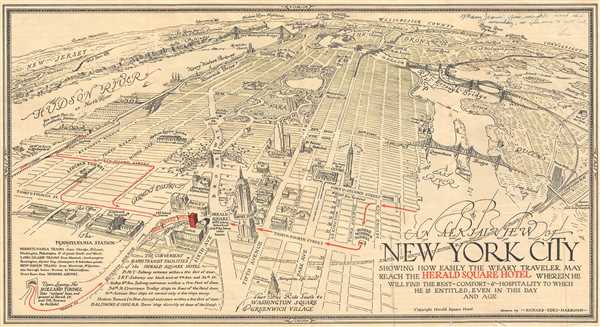 This is a 1931 Richard Edes Harrison pictorial bird's eye view of New York City. Oriented towards the north, the map depicts the city from the Hudson River to Queens and from Westchester County to Thirtieth Street. Wonderfully illustrated with numerous buildings drawn in profile, the Empire State Building, Macy's the Metropolitan Opera House, and the Chrysler Building take center stage, along with the Herald Square Hotel, which is shaded in red. Both the Pennsylvania Station (commonly referred to as Penn Station) and the Grand Central Terminal are present, along with Madison Square Garden (then located between Eighth and Ninth Avenue not far from Times Square), Carnegie Hall, and Rockefeller Center, which is only roughly shown, as it was still under construction. Central Park is beautifully illustrated and Columbus Circle, the American Museum of Natural History, and the Metropolitan Museum encircle the park. The Queensboro Bridge, the Tri-Borough Bridge, and the George Washington Bridge are illustrated in detail. Outside Manhattan, Astoria and Long Island City are labeled in Queens, and Yankee Stadium is illustrated in profile in the Bronx. The Boston Post Road is drawn and labeled as well.

This map was drawn by Richard Edes Harrison and published in 1931.