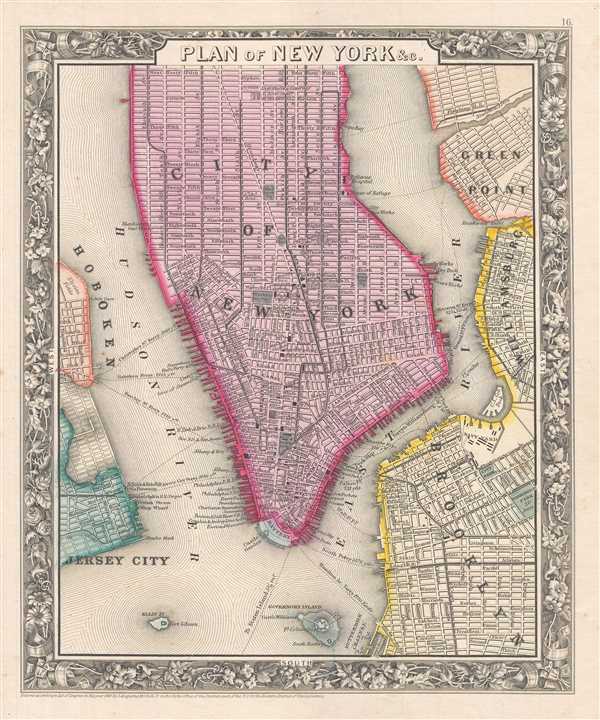 A charming map of New York City and part of the independent city of Brooklyn.

This is an 1861 Samuel Augustus Mitchell, Jr. city map or plan of New York City and its immediate environs. The map centers on Manhattan, depicting the island from Forty-Sixth Street south to the Battery and from the Hudson River to the East River. Also included are the cities of Hoboken and Jersey City on the New Jersey side of the Hudson River, and the city of Brooklyn, which by 1861 had annexed both Green Point and Williamsburg. Highly detailed, in Manhattan, individual streets are illustrated and labeled, along with parks (Washington Square Park, Union Square, and Madison Square Park), and railroads (Harlem Railroad, Hudson River Railroad). Docks along the Hudson and East Rivers, mostly in Lower Manhattan, are labeled, noting which steamship line berthed at each dock. Ferry routes across the East and Hudson Rivers are also labeled, even going so far as to note the distance from one side of the river to the other in yards. Streets are labeled in Brooklyn, Hoboken, and Jersey City as well, along with the Long Island Railroad in Brooklyn and the Morris Canal in Jersey City.

This map was produced by Samuel Augustus Mitchell, Jr. and published in the 1861 edition of his New General Atlas.