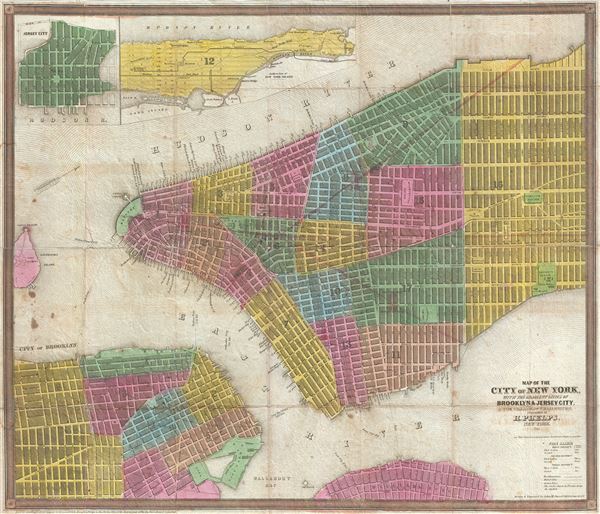 This scarce 1845 map of New York City and adjacent parts of Brooklyn was published by Humphrey Phelps. Oriented to the west, this map covers the lower parts of Manhattan from the Battery to 32nd Street. It additionally covers adjacent parts of Brooklyn from the East River to Nevins Street and South as far as Sackett Street. Williamsburg peeks out from the bottom of the map and is covered from south 11th Street to North 13th Street and from the waterfront to Third Avenue. An inset in the upper left quadrant details the upper portions of Manhattan, including the growing communities of Harlem, Yorkville, Bloomingdale, and Manhattanville. Croton Aqueduct is noted. A second inset details Jersey City. Governors Island, with Fort Columbus and Castle Williams, is noted. The whole is color coded by city ward. A table in the lower right quadrant elaborates upon the city's fire alarm system.

This map was published by Humphrey Phelps and is one of the few maps that Phelps produced without a partner. The engraving was contracted to John M. Atwood of 145 Fulton Street, a very active New York engraver who worked with most major map publishers of the period. The copyright is registered to Phelps in the year 1844, but no examples from this edition, if it exists, are known. This present edition, 1845, appears in only two collections, the New York Public Library, and the New York Historical Society. A scare and exceptional find. Later editions are known from 1848, 1849, 1850, and 1852 when Phelps partnered with Ensign.

Humphrey Phelps (1799 - 1875) was an American map, broadside, and book publisher based in New York City. Phelps was born in 1799 in Hebron, Connecticut. Phelps' earliest work seems to be a plan of New York City for his Stranger's Guide, dating to about 1830. The New York map publishing circle seems to have been quite close and Phelps commonly partnered with various other New York publishers and printers including Edward H. Ensign (1818 - 1871), Horace Thayer, Erastus Clark Bridgman (1817 - 1870), Thomas C. Fanning (1805 - 1873), Hooker, Peabody, Charles Magnus, Gaylord Watson, and George Walker, among others. The natural consequence of his rampant partnering is a vast and varied corpus of work including many scarce items with low print runs. Phelps is best known for his emigrant and tourist guides.