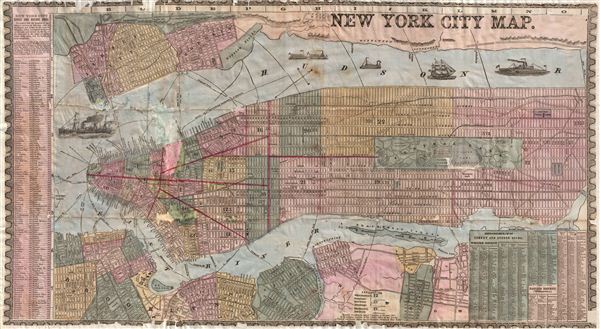 An uncommon and colorful 1857 map of New York City by Humphrey Phelps. The map covers Manhattan south of 131st street as well as adjacent parts of Brooklyn, Queens, Hoboken, and Jersey City. Individual streets are named as are many individual buildings. The map notes various fery crossing, names piers, and shows shipping lanes. Various types of sailing, cargo, and stem vessels decorate the Hudson River. Where Columbia University now stands, this map reveals a 19th century Lunatic Asylum. Central Park, though only in the planning stages when this map was published, is rendered detail exhibiting the fully glory of Olmsted's plan.

Humphrey Phelps (1799 - 1875) was an American map, broadside, and book publisher based in New York City. Phelps was born in 1799 in Hebron, Connecticut. Phelps' earliest work seems to be a plan of New York City for his Stranger's Guide, dating to about 1830. The New York map publishing circle seems to have been quite close and Phelps commonly partnered with various other New York publishers and printers including Edward H. Ensign (1818 - 1871), Horace Thayer, Erastus Clark Bridgman (1817 - 1870), Thomas C. Fanning (1805 - 1873), Hooker, Peabody, Charles Magnus, Gaylord Watson, and George Walker, among others. The natural consequence of his rampant partnering is a vast and varied corpus of work including many scarce items with low print runs. Phelps is best known for his emigrant and tourist guides.

Average. This map has been professionally restored with added margins on all sides. There are significant fill repairs in lower manhattan - see image. Price adjusted accordingly.