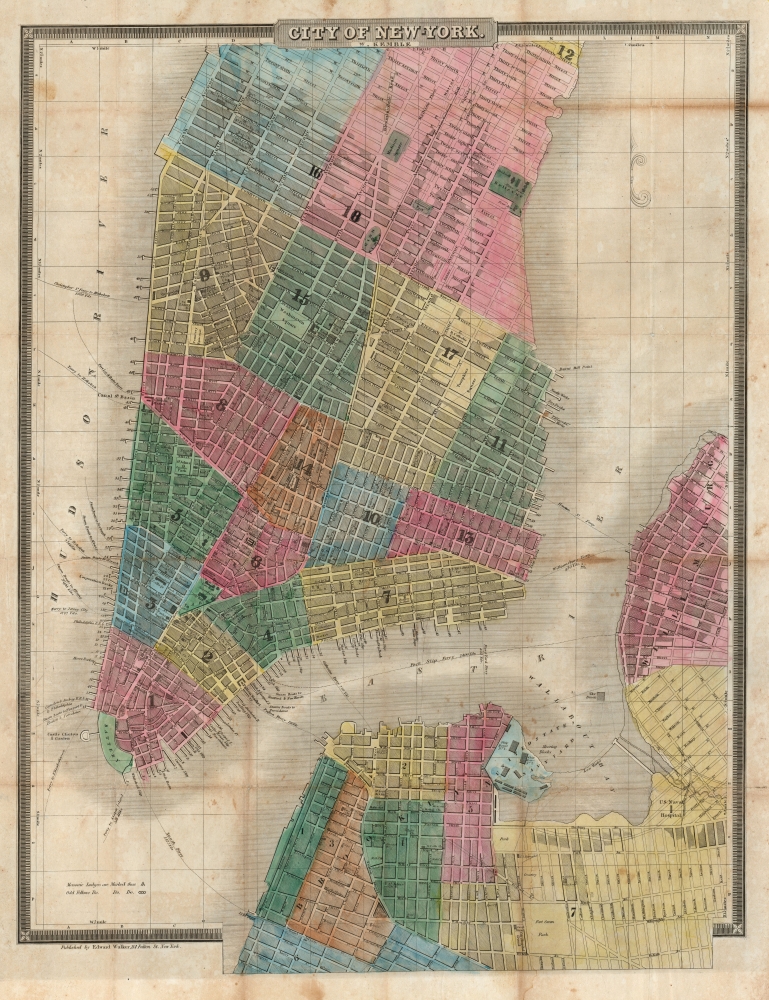 A scarce 1848 pocket map of the city of New York by William Kemble and Edward Walker. Based upon an earlier map by David H. Burr, this map covers New York City from 26th street on the west side and 40th street on the east side south as far as the Batter. Parts of adjacent Brooklyn, including Williamsburg, Brooklyn Heights, and Fort Green are also included. City wards are number and color coded, all streets are identified, and countless important buildings are noted. Ferry routes cross the East and Hudson Rivers in numerous places. The map is gridded in quarter-mile sections.

The Burr map upon which this was issued in 1833. The present example, though generally similar, is slightly enlarged and includes numerous updates throughout - particular to the various buildings noted. For example the New York Athenaeum, originally located on Chambers and Broadway but closed in 1838, has been removed from this later edition. The map notes the original city of Columbia College near Park Place as well as the current site of New York University near Washington Square Park. Throughout countless churches, theaters, and public baths area also identified.

Another major elaboration is the dramatic expansion of the Brooklyn portion of the map beyond the original map's border as far as DeKalb Street to account for the development of Fort Green Park and the surrounding streets. Also if interest is a revision to include both Masonic and Odd Fellows Lodges. A note in the lower left quadrant acts as a key to identifying these establishments. Walker was an Odd Fellow and man have been a Mason as well - hence this usual addition to the original Burr plate.

This map is notably much rarer than the earlier edition by Burr, which enjoyed quite a long and substantial run. The OCLC identifies only 4 examples in institutional collections.

Edward Walker (1804 - 1879) was a New York City based publisher active in the middle part of the 19th century. His printing house specialized in government documents and various maps sold by subscription. Edward Walker emigrated from England in 1832. A bookbinder by trade, he set up shop, called New York Book Bindery, at 114 Fulton Street, near the Fish Market. As one of New York's first bookbinders he attained considerable success and by 1850, built a huge four story building on his original Fulton Street premises. Walker is highly regarded among contemporary bookbinders for his work with marbled papers and his publication of the important text The Art of Bookbinding. (Wolfe, R. J., Marbled Paper; Its History ,Techniques, and Patterns, p. 106.)


William Kemble (1813 - c. 1870) was a New York City based merchant and engraver active in the middle part of the 19th century. Kemble immigrated with his wife Sarah from England to the United States on December 31, 1843 on board the ship Passmoz. He settled in New York where he established himself as an artist, merchant, publisher, inventor, and engraver. Kemble was on the 1839 management committee of the American Art Union, a now defunct organization focused on promoting subscription based sales of American art. He was also a founding member of the Century Club, an arts club that included John G. Chapman, a well-known painter, among others. Kemble is buried in Cyprus Hills Cemetery.


David H. Burr (1803-1875) of one of the first and most important truly American cartographers and map publishers. Burr was born in Bridgeport Connecticut in August of 1803. In 1822 Burr moved to Kingsboro, New York to study law. A year and a half later he was admitted to the New York Bar association. Burr must have questioned his choice of careers because shortly after being admitted to the Bar, he joined the New York State Militia. Though largely untrained in the art of Surveying, Burr was assigned to work under Surveyor General of New York, Simeon De Witt, to survey several New York Roadways. Seeing a window of opportunity Burr was able to negotiate with the governor of New York at the time, De Witt Clinton, to obtain copies of other New York survey work in order to compile a map and Atlas of the state of New York. Recognizing the need for quality survey work of its territory, the government of New York heartily endorsed and financed Burr's efforts. The resulting 1829 Atlas of the State of New York was the second atlas of an individual U.S. State and one of the most important state atlases ever produced. Burr went on to issue other maps both of New York and of the United States in general. In cooperation with publishing firm of Illman & Pillbrow, he produced an important New Universal Atlas and, with J.H. Colton, several very important maps of New York City. In recognition of this work, Burr was appointed both "Topographer to the Post office" and "Geographer to the House of Representatives of the United States". Later, in 1855, Burr was assigned to the newly created position of Surveyor General to the state of Utah. Burr retired from the position and from cartographic work in general in 1857. (Ristow, W. W., American Maps and Mapmakers; Commercial Cartography in the Nineteenth Century, p. 103 - 108.)