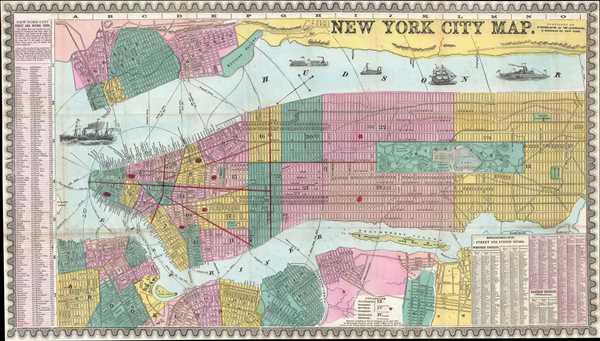 This is an uncommon and colorful 1857 map of New York City by Humphrey Phelps. The map depicts Manhattan south of 131st Street as well as adjacent parts of Brooklyn, Queens, Hoboken, and Jersey City. Individual streets are named as are many individual buildings. The map notes various ferry crossings, piers, and shipping lanes. Various types of sailing, cargo, and steam vessels decorate the Hudson River. Where Columbia University now stands, this map reveals a 19th century Lunatic Asylum. Central Park, though only in the planning stages when this map was published, is rendered in detail exhibiting the fully glory of Olmsted's plan, although only up to 105th Street, which was the limit of Olmsted's original plan. Here, Central Park is extended to 110th Street, with development only up to 105th, indicating that the change was recent. The city is colored by ward, and the fire districts have been illustrated, illuminating the perceived importance of fire safety. A street and avenue guide of New York City is situated along the left border, while street and avenue indexes of Brooklyn is included in the lower right corner.

The mid-19th century was a dynamic period in urban development of New York City. Under the governance of Tammany Hall and the corrupt 'Boss' Tweed, New York City had become a mélange of extremes. By 1864 the Five Points had devolved into the world's most notoriously dangerous slum, while further north the high ideals and design genius of Frederick Law Olmsted and Calvert Vaux created Central Park, the world's first and possibly finest planned public recreation area. Meanwhile, across the East River, Brooklyn, Greenpoint, and Williamsburg consolidated into a single city, becoming in the process the third largest city in the United States, and setting the stage for the emergence of the modern New York City.

Humphrey Phelps (1799 - 1875) was an American map, broadside, and book publisher based in New York City. Phelps was born in 1799 in Hebron, Connecticut. Phelps' earliest work seems to be a plan of New York City for his Stranger's Guide, dating to about 1830. The New York map publishing circle seems to have been quite close and Phelps commonly partnered with various other New York publishers and printers including Edward H. Ensign (1818 - 1871), Horace Thayer, Erastus Clark Bridgman (1817 - 1870), Thomas C. Fanning (1805 - 1873), Hooker, Peabody, Charles Magnus, Gaylord Watson, and George Walker, among others. The natural consequence of his rampant partnering is a vast and varied corpus of work including many scarce items with low print runs. Phelps is best known for his emigrant and tourist guides. Learn More...