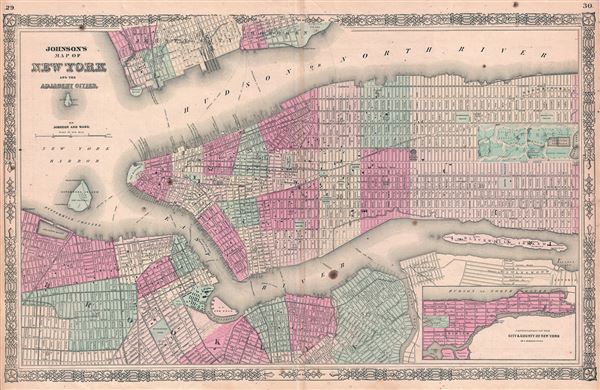 A fine hand colored map of New York City and Brooklyn dating to 1865. It covers the island of Manhattan and the borough of Brooklyn as well as parts of Jersey City and Hoboken. Johnson's plan is heavily based upon the third state of J. H. Colton's New York City atlas map.

Central Park is shown in great detail and in and earlier incarnation than we know today with the receiving Reservoir in the place of today's Great Lawn. The important ferries running between New York, Brooklyn, Queens, and New Jersey, are all noted. In Queens we can see the newly built Long Island Railroad leaving Flushing station at Hunter's Point. At the tip of Roosevelt Island where now stands a decrepit ruin, there Johnson notes a civil war hospital.

Very good. Minor wear and toning along original centerfold. Some spotting at places.