1949 Hagstrom Map Of New York and its Tourist Attractions 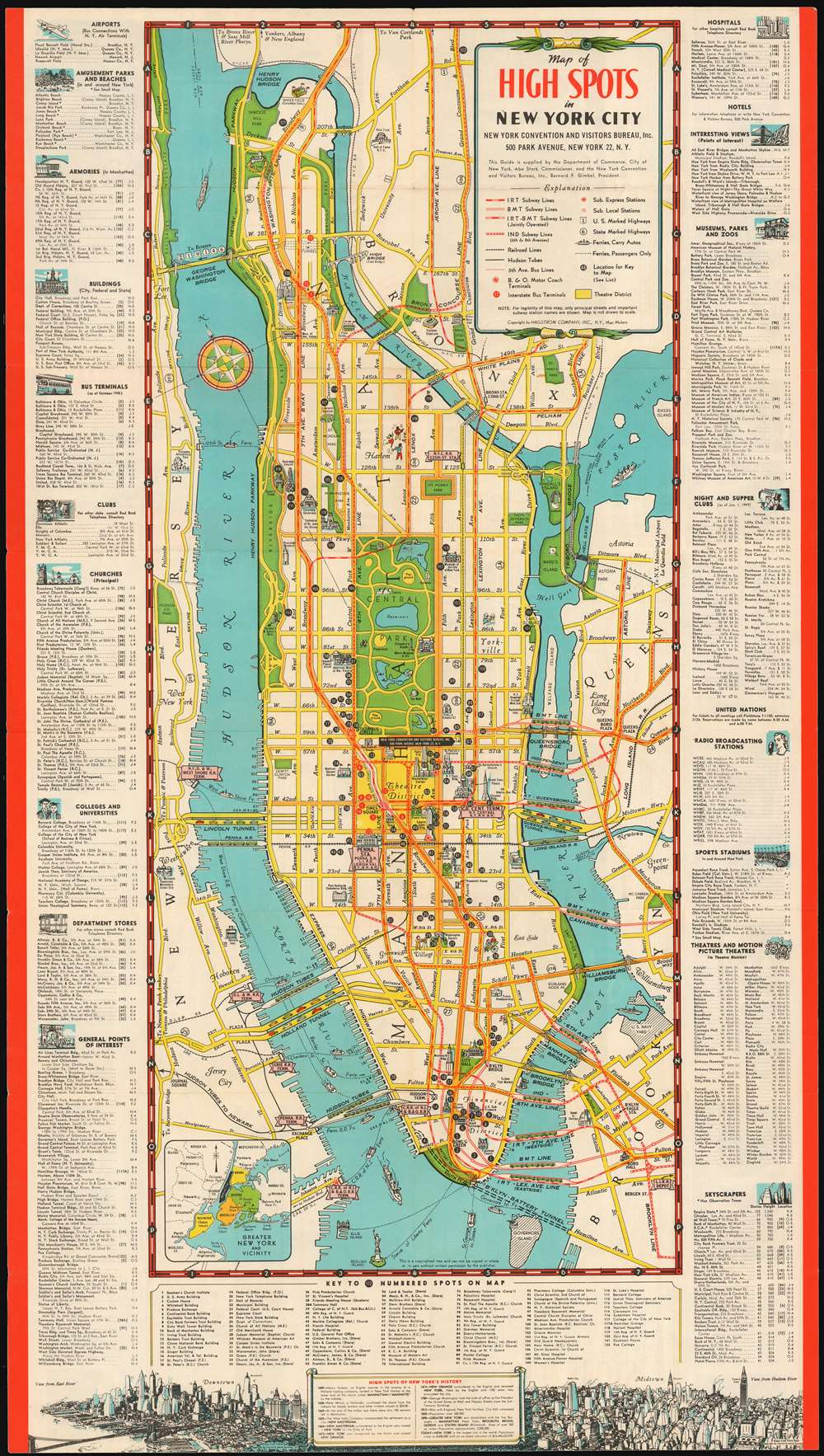 1949 Hagstrom Map Of New York and its Tourist Attractions

This 1949 Hagstrom Map of New York City, was produced for and published by the New York Convention and Visitors Bureau and the Department of Commerce. It highlights for the visitor to New York a wide array of The City's attractions, ranging from points of interest for the casual sightseer to nightclubs for the more dedicated visitor.

Hagstrom - already known for his judicious distortion of street size for the sake of clarity and legibility in his maps - has outdone himself here by stripping away all but New York's 'principal streets.' The space this afforded him has been used for th presentation of important landmark buildings, and even for pictorial representation of key neighborhoods (note the musicians and dancers in Harlem, the painter at an easel in Greenwich Village, and a moustachioed braumeister at the corner of Lexington and 86th, then still the center of New York's German immigrant community.) 122 features are marked numerically, keyed to a list below the map. Bridges and tunnels are drawn with either automobiles or trains running on them, according to their type. The Brooklyn-Battery Tunnel is marked as a dotted line: it would not open until 1950. At the bottom of the image is a westward-oriented bird's eye view of the city skyline, labeling Downtown, Midtown, and labeling key features of the skyline employing the same number system used in the map above.

The margins of the map are filled with useful features for visitors, in particular those falling outside the bounds of the map, or not evident upon it. Airports and bus terminals are listed (but not railway stations, which presumably were sufficiently prominent on the map itself); amusement parks and beaches, municipal buildings, churches and synagogues, night and supper clubs, colleges, department stores, and theaters are all noted. It is gratifying to note that not everything shown the visitor required purchases or paid admittance: views, skyscrapers, monuments and even general neighborhoods are listed so that any visitor might be able to find things to do or see within their means.

The verso of the map is rich as well, with thirty six photographs of architectural landmarks and city vistas. Here are described the highlights of Downtown, Midtown and Uptown New York. There is also a note from then-Mayor William O'Dwyer:'You may be surprised... to discover that New York is a typically American town, friendly and hospitable. We New Yorkers take pride in being your good neighbors.'

Though the map does not bear an official date of publication, the rapidly-shifting addresses for 'Night and Supper Clubs' bears the notation 'as of Jan 1, 1949.' OCLC lists one example of this map, dated 1945 based on an 'as of October 1945' notation with respect to the nightclubs.

Very Good. Wear at juncture of folds. Trimmed at bottom as issued.