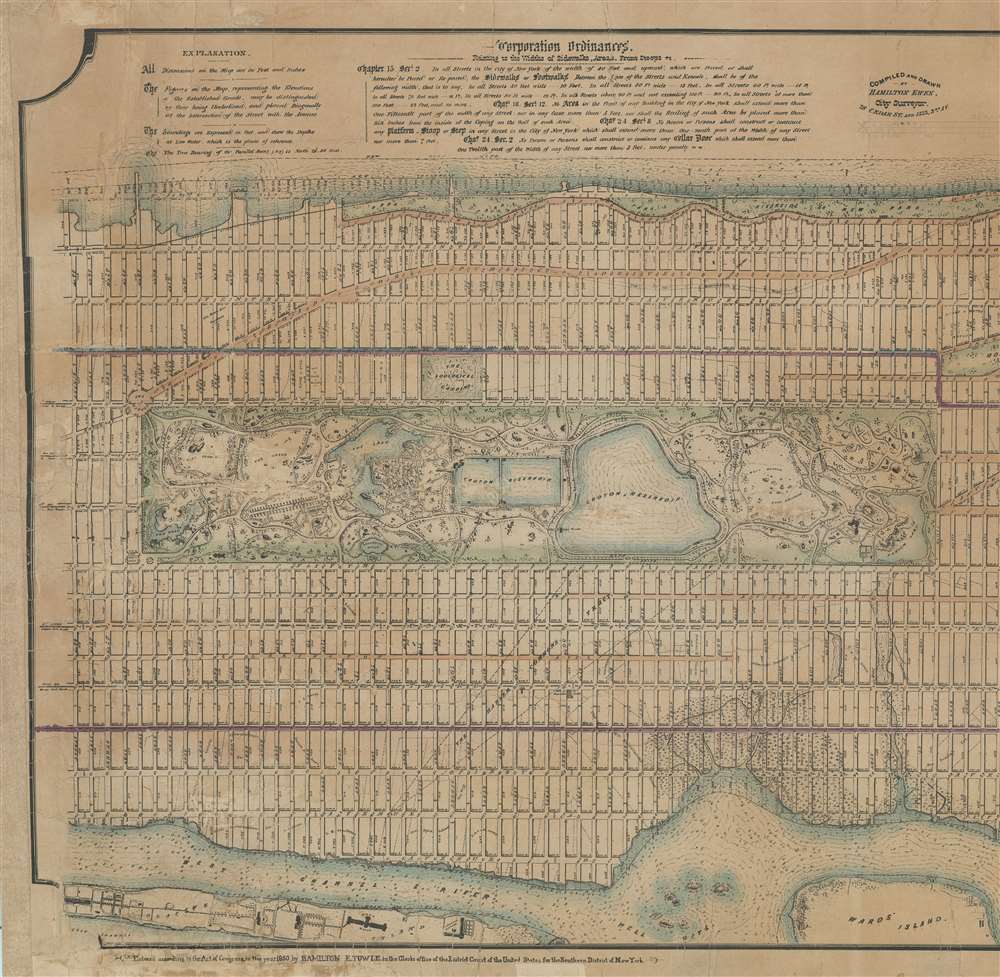 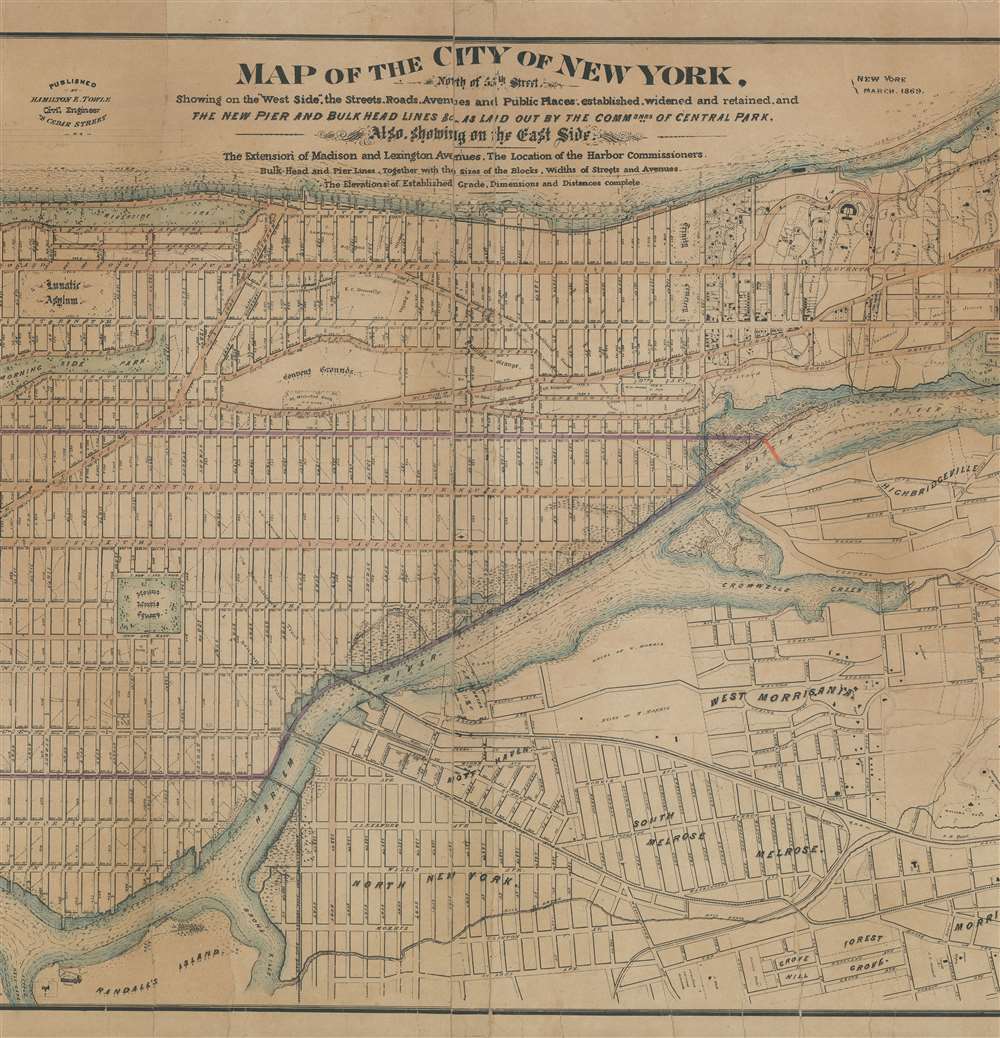 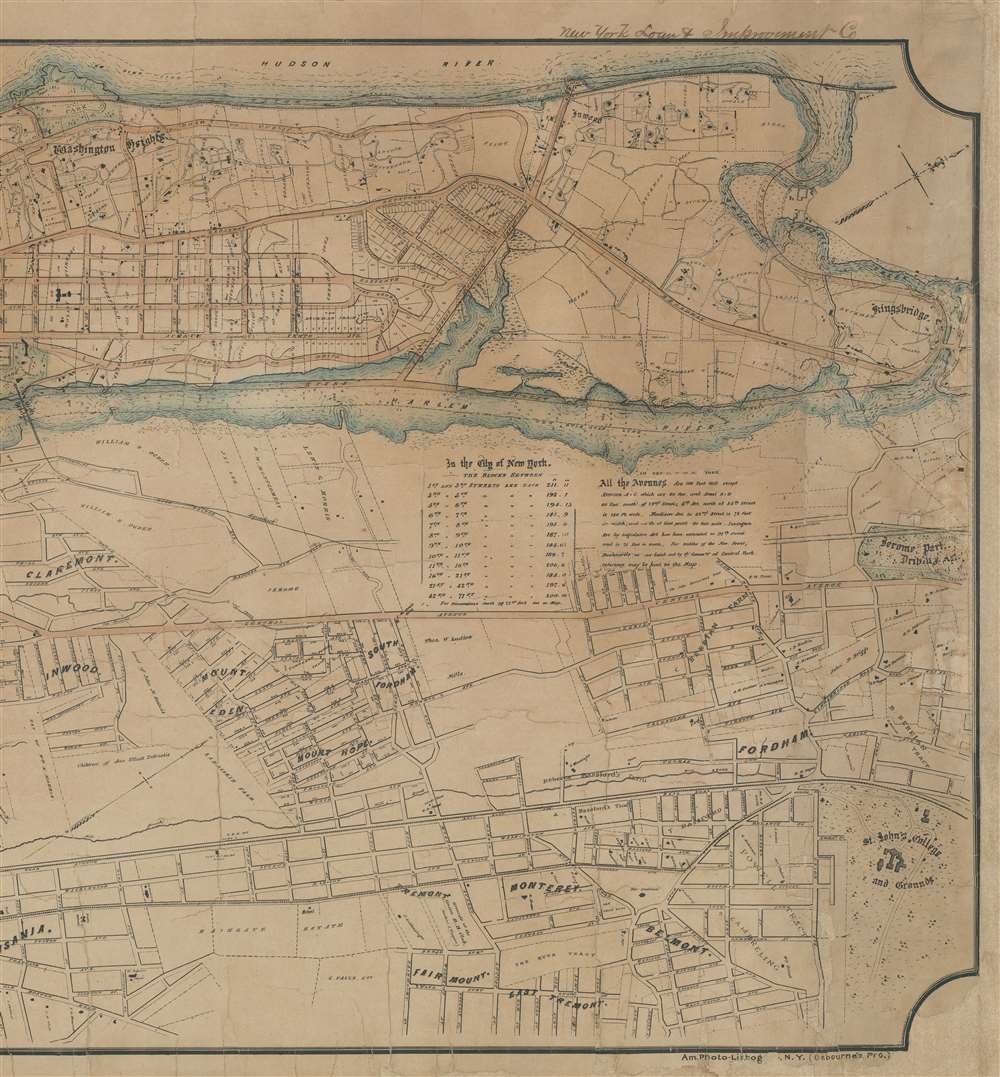 One of the earliest maps to show Riverside Park.

Map of the City of New York, North of 55th Street, Showing on the 'West Side', the Streets, Roads, Avenues and Public Places, established, widened and retained, and the New Pier and Bulk Head Lines and c., as Laid out by the Commsnrs. of Central park. Also showing on the East Side, The Extenson of Madison and Lexington Avenues, The Location fo the Harbor Commissioners, Bulk-Head and Pier Lines, together with the Sizes of the Blocks, Widths of Streets and Avenues, The Elevations of Established Grade, Dimensions and Distances complete.
1869 (dated)     23.25 x 67.25 in (59.055 x 170.815 cm)     1 : 8448

An extremely rare privately published map of New York City's Manhattan above 55th street drawn by Hamilton Ewen and published in 1869 by Hamilton E. Towle. Although a commercial rather than official venture, the map offers impressive size and detail, noting information relating to the enormous project of street grading and leveling then occurring on what is today the Upper West Side. It also notes prospective improvements on the docks, references real estate transactions, proposed rail lines, and notes street widths. Towle clearly recognized the commercial value in such a map to real estate developers and speculators.

The map is partially derived from an earlier map published one year earlier, in 1868, by Towle that covered the same area east of 5th Avenue, but did not include the Upper East Side. Scientific American described that map as 'a valuable guide to persons desiring to purchase desirable lots in this Babylon of the Western Hemisphere', suggesting that this map, and this one, was a commercial rather than official production, intended for use in real estate development and speculation. A note in the upper right add provenance to this piece, 'The New York Loan and Improvement Co.,' a real estate speculation firm run by Charles Tracy Barney.

This map was surveyed and drafted by Hamilton Ewen and published in 1869 by Hamilton E. Towle. It was printed by the American Photo-Lithographic Company using the Osborne Process. This map is rare with the only other known example being in the collections of the New York Public Library.


Hamilton Ela Towle (June 24, 1833 - September 2, 1881) was an American civil engineer active in New York, Austria, Colombia, and Boston in the late 19th century. Towle was bornin in Lee, New Hampshire. He developed an interest in Civil Engineering in 1848, working under the engineer W. Q. Down for the Portsmouth and Concord Railroad. After several years at the Portsmouth Rail Yard, Towle worked for one year at the Pensacola Navy Yard. He decided to pursue a formal education in Civil Engineering and enrolled in Harvard University's Lawrence Scientific School. After two years of study, he accepted a position as assistant engineer at Fort Montgomery on Lake Champlain. In 1857, he moved to Austria to accept a supervising position at the Danube River dry-docks. On his return to the United States upon the expiration of his Austrian contract, he was involved with the Great Eastern disaster of 1861. Apparently the Great Eastern, 2 days out from Liverpool, lost its port paddlewheel, leading to other significant damage. Towle devised a plan to regain control of the rudder, thereby saving he ship and all aboard. After saving the Great Eastern, which garnered Towle considerable fame, he relocated to Boston, establishing himself as a private Civil Engineer. He worked on various mining and railroad contracts before moving to New York City where he published several maps associated with the historic urbanization of Upper Manhattan. In 1874, he took a contract for the Columbian government to complete a study of the Magdalena River. Although unverified, he probably contracted malaria (or some other tropical disease) in Colombia, as from this point forward, his heath began a steady and precipitous decline. In 1877, he traveled to Europe for his 'health,' completing a prolonged tour and returning to New York in 1878, but traveling again to Europe shortly thereafter. He died at the home of his son-in-law in Upper Norwood, not far from London, in 1881. Towle, though accomplished, was just 49 when he died. Learn More...

Good. Even toning. Signficant cracking of paper rstored with linen backing - nonethelss, superior to the NYPL example and thus the finest surviving example. Scale added in manuscript under title.