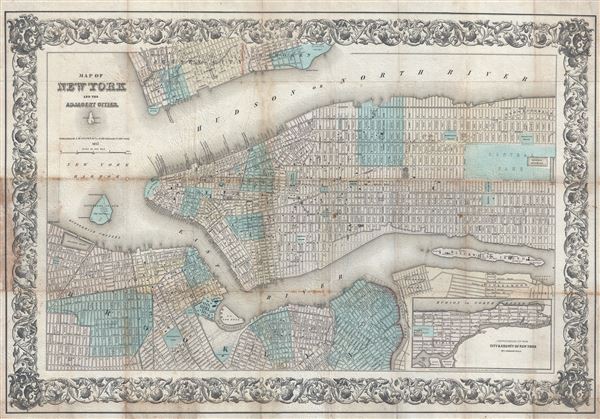 Only known example of an independent issue of Colton's influential map of New York City.

An extremely scarce and highly decorative pocket map example of J. H. Colton's iconic map 1855 of New York City. Cartographically this map is identical to the second state of a similar, far more common, map of the same title that appears in Colton's Atlas of the World. This example, on the other hand, has been prepared in pocket map format and is embellished with an elaborate acanthus leaf border.

The map covers Manhattan as well as parts of Brooklyn, Jersey City, Hoboken, and Queens. An inset in the lower right quadrant detail Manhattan north of 86th street. The second state of Colton's New York map is identifiable by the presentation of a blank Central Park, suggesting the map was made after plans for the park were initiated but before the famous design competition. In the first state, Central Park is overplayed with streets. Subsequent editions attempt to illustrate the development and planning of the park.

The year 1855 in New York City witnessed the inauguration of Fernando Wood, New York's first mayor from Tammany Hall, an increasingly corrupt institution that would rise dominate regional politics for the remainder of the 19th century. Meanwhile, across the east River, Brooklyn annexed Bushwick and Williamsburg becoming, in the process, the third largest city in the United States and setting the stage for Brooklyn's consolidation into the modern New York City in 1898.

This is the only known example of Colton's New York and Adjacent Cities as a pocket map.